Donald Trump said he enforced the red line Barack Obama drew in Syria in 2012 after his predecessor wouldn’t.

In an interview with Eric Bolling on “The Fox News Specialists,” the president was asked if he had his own version of a red line for North Korea. He said he learned from Obama’s red line, which the former president articulated in 2012 to mean that if Bashar al-Assad used chemical weapons in Syria, it would warrant action from the U.S. military.

Though Assad did, it was never executed. 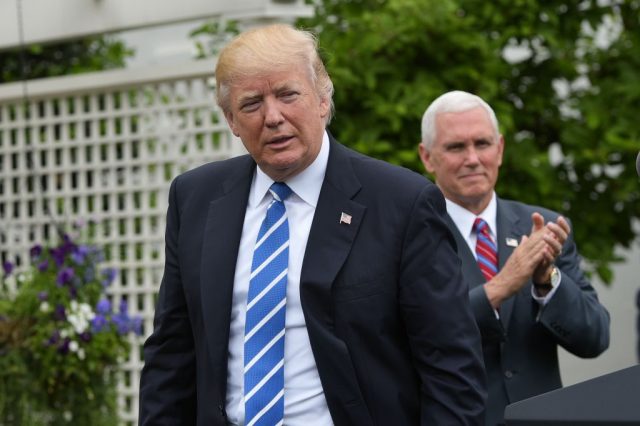 “Well, I’m not like President Obama where you draw a red line as you said a red line in the sand and then lots of bad things happen and he never goes over the red line,” Trump said. “In fact I actually covered his red line for him in Syria.”

“But I will say that you see what’s going on. It’s very, very threatening to us and to many other allies if you look at South Korea, if you look at Japan and others. It’s a very horrible thing that’s going on. And his statements are very inflammatory. They’re horrible. So we’ll have to see. I don’t like drawing red line but I act if I have to act.”

“I’ve been pretty well known for saying like nothing when it comes to the military,” he continued. “When they announced they were going into Mosul in 4 months, and then they said in 3 months, in 2 months, we’re going in next week. I said why do they keep saying that? That was supposed to be a pretty quick battle for Mosul. Guess what? It’s still going on because the enemy knew they were coming.

Bolling asked Trump how safe American troops along the demilitarized zone are.

“Nobody’s safe,” he said. “I mean, who’s safe? The guy’s got nuclear weapons. I’d like to say they’re very safe. These are great brave solders, these are great brave troops and they know the situation. We have 28,000 troops on the line and they’re right there. And so nobody’s safe. We’re probably not safe over here.

“If he gets the long-range missiles, we’re not safe either. So we have to do something about it and we’ll see what happens.”