Jim DeMint is officially out at the Heritage Foundation.

The South Carolina Republican and Tea Party figurehead joined the conservative think tank as CEO and president after resigning from the U.S. Senate in 2013, but he was removed by a unanimous board vote Tuesday afternoon. 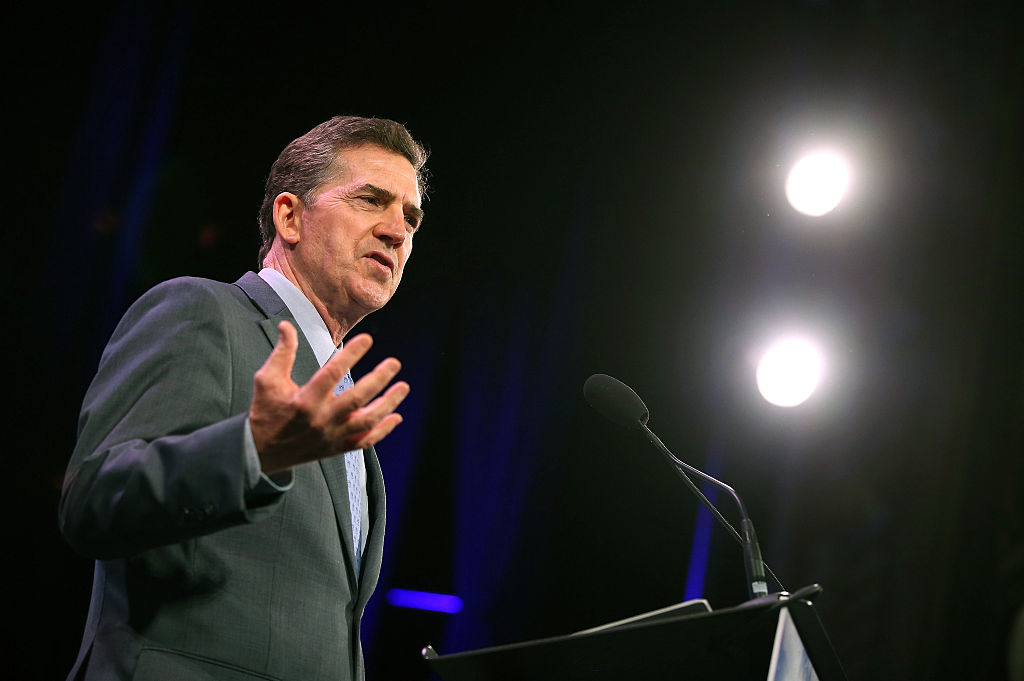 “After a comprehensive and independent review of the entire Heritage organization, the Board determined there were significant and worsening management issues that led to a breakdown of internal communications and cooperation,” Vice President and Chairman of the Board Thomas A. Saunders III wrote in a statement accompanying the announcement. “While the organization has seen many successes, Jim DeMint and a handful of his closest advisers failed to resolve these problems.”

“This was a difficult and necessary decision for the Board to take. As trustees, we have governance and oversight responsibilities for this organization and our 500,000 members. We were compelled to take action.”

The Heritage board also voted Tuesday to replace Jim DeMint with Ed Feulner, one of the foundation’s founding trustees.

Feulner served as Heritage’s president from 1977-2013 and most recently was a member of President Trump’s transition team.

DeMint released a long statement after the board’s announcement.

“When I came to Heritage in 2013, I told our staff and millions of members around the country that over the next four years, we had the opportunity to lead a resurgence of conservative policies and communications to win the hearts and minds of the American people. I’m grateful to have worked with some of the greatest minds and talents in America and believe we’ve accomplished together what we set out to do. Reagan once said there’s no limit to what you can achieve if you don’t care who gets the credit, and nothing better exemplifies that selfless dedication than the men and women I’ve been honored to work with at Heritage. I will continue to be part of that great fight for freedom for years to come and I’m excited about the next chapter in my work for the conservative movement.”

“The public statement released earlier is puzzling given that the board of trustees has praised our work for four years and approved performance bonuses for the entire management team each year for a job well done. It also stands in stark contrast to the independent review by the University of Pennsylvania which publicly recognized advances in Heritage’s scholarship, management and integrity over the last 4 years, and improved Heritage’s rankings in virtually every category. In fact, Heritage was recognized as the 13th Best Managed Think Tank in the world in 2016.

I’m also proud to have been part of leading Heritage’s most successful impact on a presidential transition team since the days of Ronald Reagan, culminating in the confirmation of Judge Gorsuch and one of the best presidential cabinets in recent history.”

Over the last 4 years, Heritage has had numerous accomplishments including:

● Playing a key role in the presidential transition of President Trump, with dozens of Heritage staff helping offer conservative policy recommendations for the new administration.
● Partnering with the Federalist Society to create a list of possible Supreme Court judicial nominations that led to the confirmation of Justice Neil Gorsuch.
● Completing the Mandate for Leadership Series, which included the Blueprint for Balance, to guide Congress and the new administration on key agency and budget reforms.
● Establishing 4 new research institutes: the Institute for Constitutional Government, the Institute for Economic Freedom and Opportunity, the Institute for National Security and Foreign Policy, and the Institute for Family, Community, & Opportunity.
● Creating two new leading research publications: the Index of Military Readiness and the Index of Culture & Opportunity.
● Launching The Daily Signal, an award-winning conservative news and commentary site that has over 30 million visitors a year.
● Creating the American Perceptions Initiative, which conducts market research on how best to discuss conservative policy ideas with the American people
● Building of the Heritage Freedom Center that includes new intern housing for the next generation of conservative leaders.
● Creating the Feulner-Weyrich Fellowship program for Capitol Hill staff that trains dozens of key people on how best to advance conservative policies.

Additionally, according to the University of Pennsylvania‘s Think Tanks and Civil Societies Program Index, Heritage improved in the rankings of think tanks worldwide and nationally for scholarship and integrity.

“All in all, this is a record of which I am very proud, on behalf of myself, my management team and the many dedicated Heritage staff and members nationwide.

Here is the full text of Saunders III’s public statement:

After a comprehensive and independent review of the entire Heritage organization, the Board determined there were significant and worsening management issues that led to a breakdown of internal communications and cooperation. While the organization has seen many successes, Jim DeMint and a handful of his closest advisers failed to resolve these problems.

This was a difficult and necessary decision for the Board to take. As trustees, we have governance and oversight responsibilities for this organization and our 500,000 members. We were compelled to take action.
Heritage has never been about one individual, but rather the power of conservative ideas. Heritage is bigger than any one person.

As Chairman of the Board, I wholeheartedly endorse this change. It will make Heritage stronger in the short term and the long run.

Heritage is a permanent policy research institution fighting for conservative ideas, as Ed Feulner often reminds us. We remain committed, as ever, to the principles that have made America great: free enterprise; limited government; individual freedom; traditional American values; and a strong national defense. This will continue under the leadership of Ed and his successor.

Feulner led Heritage for more than three decades and returns to our organization after serving on President Trump’s transition team. There is no one better to guide the ship while we seek our new leader and continue to push for conservative ideas and policies in Washington and around the nation.

As conservatives, we have a tremendous opportunity ahead of us to restore the principles of the American founding. You and the 500,000 Americans who donate to support Heritage have played a crucial role in making our work possible, and I look forward to working with you in the future. As we move forward, the Board of Trustees will be seeking your thoughts and input about our search for the next leader of Heritage.

Thanks to your support, our scholars have shaped public policy in a firmly conservative direction for the last 44 years and will continue to do so in the future.

I regret not being able to let you know sooner about this change. While we were trying to resolve this matter amicably, we honored our side of the bargain to remain silent.

I wanted to ensure that the Board’s decision was final before alerting you. Unfortunately, the media ran with speculation about this story before the facts could be disclosed. As a loyal Heritage supporter, I hope that you will understand the reasons that compelled these changes and stand with us in this time of transition.
Thank you for all your support and dedication to the conservative cause.

Sincerely,
Thomas A. Saunders III
Chairman, Board of Trustees
The Heritage Foundation