The New York Times has notoriously been the publication that conservatives despise.

Except now, Markos Moulitsas, arguably the most liberal blogger in America — he founded Daily Kos and co-founded Vox Media —  is calling the publication out for being a giant GOP mouthpiece. 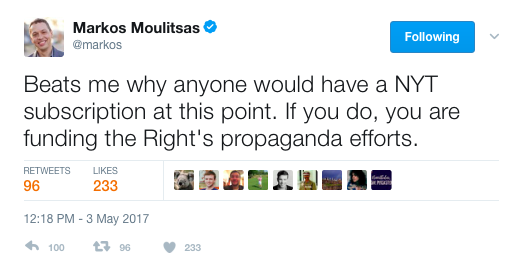 Twitter followers called him “unhinged” and wondered if he’s been smoking crack.

“Aside from ideology, @NYTimes cares nothing about racial and ethnic diversity,” he wrote. “There is nothing ‘liberal” about them. Stop thinking they are.”

Last month, Ex-Donald Trump aide Sam Nunberg told CNN Money that NYT reporter and CNN analyst Maggie Haberman lunched with Trump in the summer of 2015. He called the New York Times “failing” and the “crown jewel” all in one breath. CNN called Haberman the reporter that Trump, who badmouths the media any chance he gets, can’t quit.

And just a week ago, during a panel discussion, NYT White House correspondent Glenn Thrush said that President Trump is far more accessible to the press than former President Obama ever was. News outlets such as Fox News eagerly featured his remarks.

“I do want to give Trump credit on things,” Thrush said on WAMU. “I think one of the things that I think he’s doing better than Barack Obama are these press conferences and his outreach to individual reporters, even for organizations, like my own, that he criticizes. When Obama had press conferences, he had a single piece of white paper and he had six or seven organizations that he had preselected to call upon, and a lot of them were pretty favorable to him, too. I think Trump’s free-ranging press conferences are a lot more democratic than the way that Obama conducted.”

Also on Wednesday, liberal NYT opinion writer Thomas Friedman wrote a piece that asks, “Trump: Crazy Like a Fox or Just Crazy?” On Trump saying he’d be “honored” to meet with the leader of North Korea and his praise for other world dictators, Friedman asks, “Is this a political strategy unfolding or a psychiatric condition unfolding?”

All in all, probably not a good idea for The Grey Lady to hire Moulitsas as head of circulation just yet.