Who started it: Technically, Begala. Hume fired off the first tweet on Tuesday night. It wasn’t directed at Begala, but rather a general question to the zeitgeist regarding CBS late-night host Stephen Colbert for the recent lewd joke he made about President Trump and Vladimir Putin. During his monologue on Monday, the spoke directly to Trump regarding his first 102 days in office. He said, “You have more people marching against you than cancer. You talk like a sign language gorilla that got hit in the head. In fact, the only thing your mouth is good for is being Vladimir Putin’s cock-holster.” The word “cock” was bleeped out.

HUME: Will there be consequences for Stephen Colbert’s obscene attack on the president last night, or even any comment from CBS?

BEGALA: Gee, I dunno. What were the consequences when Donald Trump obscenely boasted of sexually assaulting women?

HUME: Billy Bush got fired. Trump caught hell in all quarters of the media, supporters bailed, Trump renounced the comments. I could go on.

BEGALA: Do. Go on. Tell me about how the right punished Ted Nugent for vile, violent, obscene attacks on HRC.

HUME: What does Ted Nugent have to do with Stephen Colbert’s vile comments about Donald Trump? Changing the subject, Paul?

BEGALA: Your selective outrage. A comic told a dirty joke and you clutch your pearls. U said nothing when Nugent said this:

[Note to readers: Nugent, a rock musician and avid Trump supporter who recently visited the White House, has made charged comments about Hillary Clinton. In January of 2016, he called for then-President Obama and Hillary Clinton to be “tried for treason and hung.” In the fall of 2016, then-candidate Donald Trump released an ad in which Nugent trashed Hillary Clinton. During a 2007 concert, he said, “Hey Hillary, you might want to ride one of these [guns] into the sunset, you worthless bitch.”]

HUME: Sorry Paul, but that was no dirty joke. It wasn’t a joke at all.

BEGALA: Matter of taste. Just sayin’ you’d have more cred if you’d called out Nugent for much worse. Still, you have my respect and admiration.

HUME: I never heard or read about Nugent’s vile comments. I hate that sort of stuff. May I take it you were as offended by Colbert as well?

BEGALA: You should watch @CNN. We covered it.

HUME: I’m sure you did. Did you also cover Colbert, with indignant commentary from you?

BEGALA: Hadn’t heard the joke when I was on air this a.m. But I like a good dirty joke. My sensibilities are not as refined as yours.

HUME: I can see how working for Bill Clinton could dull one’s sensibilities.

BEGALA: Let me fix that for you: I can see how working for Roger Ailes could dull one’s sensibilities.

HUME: Didn’t you just say my sensibilities are more refined than yours?

Who won? Both men who are well-known characters in the Washington mediasphere gave as good as they got. But in my view, Begala won this one when he snapped back with his Roger Ailes remark. He also won by ending the testy exchange on his terms and by throwing the whole thing back in Hume’s face, saying he was leaving the Twitter fight to go watch Stephen Colbert. Just tactically speaking, Begala appeared to have the upper hand all the way through. Hume saying that he had never read or heard about Ted Nugent’s “vile comments” when Nugent has made plenty of appearances on a network that Hume appears regularly is pretty weak sauce.

Begala, however, conceded his argument with Hume to this “nasty woman” who assessed the fight: 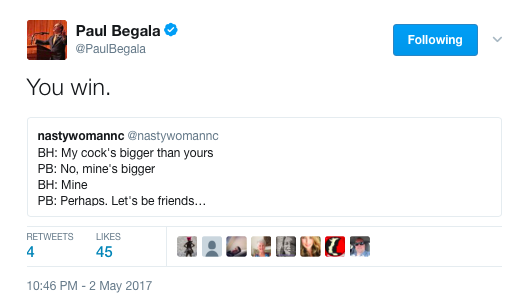 AFTERMATH: Will they kiss and make up?

Will they chuckle and be polite if they run into each other in a network greenroom? Likely. They both know how the game is played and both are quick-witted, God-fearing and polite. Will they dine out together at 1789 in Georgetown? Probably not in this lifetime.