Shooters today tend to take for granted self-contained metallic cartridges that combine the primer, powder and projectile into one unit that is easy to load and handle. But when they first appeared, they were a gigantic advancement over the time-consuming process of stuffing powder, wad and ball into a barrel and then adding a cap to set it all off.

Then another Colt engineer named Mason made some improvements, which included mounting a firing pin on the hammer. By this time though, all the old cap and ball barrels that were fitted with a loading rammer had been used up, so new barrels were used that did not have the rammer recess. These newer modified guns were called Richards/Mason conversions.

A great many old cap and ball revolvers were sent to Colt to be converted to fire metallic cartridges using either the Colt Richards or Richards/Mason conversion. These conversions were very popular in the Old West even after the Colt Singe Action Army (SAA) had been made the primary military handgun. It seemed that the public was satisfied with the conversions and most SAA production was going to the government anyway.

There were mainly three calibers or cartridges used for conversions. They were the .38 rimfire, .38 centerfire and the .44 Colt centerfire, with the most well known probably being the .38 Colt. It used a heel-type bullet – similar in appearance to the bullets used in .22 rimfire ammunition today – with 130- to 150-grain projectiles and a diameter of about .375 to .380 inch. Eventually, the round was modified and became the .38 Long Colt with a .357-caliber bullet of about 150 grains.

For testing, Uberti sent a Model 1872 Open Top revolver chambered in .38 Special, which is representative of a Richards/Mason conversion. It does not have need of a breech plate to fill the gap between the breech and the back of the cylinder, and a barrel representing one of new manufacture for the period is used. This gun is nevertheless a nearly accurate replica of a revolver that was used in the Old West.

Original revolvers of the time did not have a safety, but the replica 1872 does have one, of sorts. This is probably dictated by regulations regarding imports, since the gun was produced by Uberti in Italy. To engage the safety, the revolver needs to be unloaded and in the half-cocked position. Then a small screwdriver is used to partially turn a screw on the right side of the hammer, which causes a steel post to rotate out from the face of the hammer. The post prevents the firing pin, which is integral to the hammer, from striking the primer of a cartridge. It’s not quick to engage or disengage, but in an age of run-away litigation, is a sad necessity.

When single-action revolvers were common, shooters knew how to carry them to prevent a discharge if they were dropped and the hammer was driven forward to strike the primer of a cartridge. It was simple. Carry the revolver with an empty chamber beneath the hammer. Yeah, the gun is a six-shooter, but it was safer to carry only five rounds if the gun wasn’t going to be fired immediately after loading.

Accomplishing this is actually pretty simple. First, pull the hammer back to the half-cock position. This frees the cylinder to turn clockwise when viewed from the rear. Open the loading gate on the right side of the revolver and drop a cartridge into the exposed chamber. Rotate the cylinder clockwise, past the next empty chamber, to the second empty chamber. Then load a cartridge and continue rotating the cylinder clockwise putting a round into each of the next three chambers. Now there are five rounds in the cylinder. Close the loading gate while keeping the gun pointed in a safe direction.

Next, keeping the gun pointed in a safe direction, cock the hammer fully. This should rotate the cylinder one-sixth turn and lock it in place over the empty chamber. Carefully lower the hammer all the way by pulling the trigger and retarding the fall of the hammer with the thumb. The hammer should now be all the way forward on an empty chamber. Double check this by carefully checking to make sure the cylinder is locked in place and, again while the gun is pointed in a safe direction, looking at the rear of the cylinder to check that the chamber under the hammer is empty.

The test 1872 Open Top was nicely finished and well fitted. The 7.5-inch barrel as well as the cylinder, trigger guard, ejector, ejector rod housing, and grip frame were nicely polished and blued. The recoil shield, loading gate and hammer were attractively color case hardened, and the front blade sight appears to be made of brass. Stocks, or grip panels, were of dark-stained walnut with a gloss finish.

The un-fluted cylinder features depictions of naval scenes, which is true to the period. Markings include 1871 on the left side of the barrel and patent dates of 1871 and 1872, as well as “.38 Cal” on the left side of the frame. The hammer spur is checkered to help prevent the thumb from slipping when cocking the hammer, and the rear sight is nothing more than a bump at the rear of the barrel in which a shallow U notch has been cut. Sight alignment was to point of impact, an important factor in a gun where the sights are not adjustable.

Takedown for cleaning is simple but does require a screwdriver, hammer and drift. After making sure the gun is unloaded, the hammer should be half cocked. Then, the retention screw for the barrel wedge on the left side of the barrel should be turned about 1/4 turn so the flat allows the wedge to be removed by gently tapping it out from the right side. Next, the barrel assembly can be removed from the frame. That may require gently tapping with a soft hammer because the fit is tight, as it should be. Then the cylinder may be pulled forward and separated from the frame.

Shooting the 1872 with a variety of .38 Special loads proved to be pleasant. The gun was accurate, and recoil – due to the weight of the gun and relatively low velocity of .38 Special ammunition – was light. And, because the gun is single action and takes longer to reload than does a magazine-fed semi-automatic, shooting became a more leisurely activity. It also made one appreciate the challenges faced by a shooter in the 1870s that might have defended his life with a gun like this.

For more information, visit Uberti.com or contact Stoeger Industries at 800-264-4962.

Bullet weight measured in grains, velocity in feet per second 15 feet from the muzzle by chronograph, and accuracy in inches for three five-shot groups at 7 yards.

Better yet: Click here to check out the “Handbook Of Modern Percussion Revolvers” 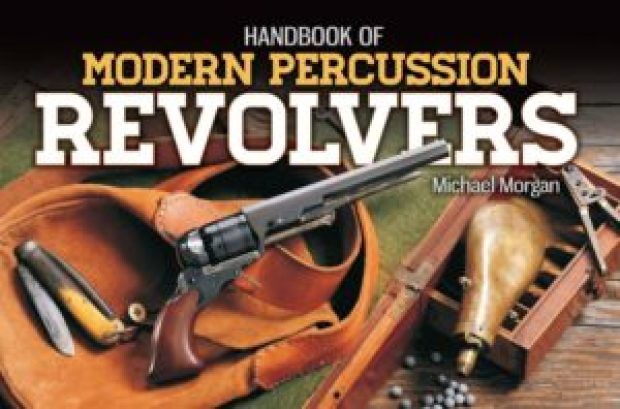