A tweet this week, however, about his finger to finger touching ex-Rep. Michele Bachmann (R-Minn.) has political observers calling him creepy.

I mean, this does sound a little gross. Right? 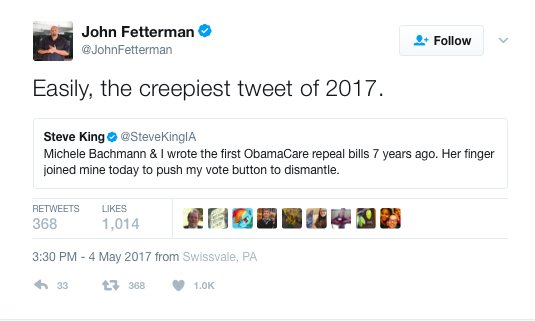 Some comments in no particular order from other followers:

“I think that qualifies as a pre-existing disease.”

“Why are you so fucking creepy and evil?”

“‘Her finger joined mine’ CRINGE.”

And perhaps the ugliest among them: “How romantic. I hope these two lovebirds get gangrene on those fingers and fail to find a doctor to treat them.”

The Mirror attempted to call King’s Washington office to pester his press secretary about the tweet and whether King handles his own Twitter account. But the main phone line went directly to voicemail at 3 p.m. I followed up by emailing Casaday Nguyen, his policy director.

Friday is the press secretary’s last day, so I was directed to send my email request to a different email.

I received a response from “Sarah” who wrote: “Yes Mr. King does tweet himself!”

I pushed more for the meaning behind his touchy tweet.

There are other examples of King’s bizarre comments over the years.

Here are a few:

2013: Sounding much like President Trump’s campaign comment about Mexican rapists, King said some illegal children in the U.S. are good kids. But there are others “who weigh 130 pounds and they’ve got calves the size of cantaloupes because they’re hauling 75 pounds of marijuana across the desert.”

2017: He tweeted, “We can’t restore our civilization with somebody else’s babies.”