“Right now Obamacare is failing. We have a failing health care,” Trump said while seated next to Australian Prime Minister Malcolm Turnbull. “I shouldn’t say this to our great gentleman and my friend from Australia, because you have better health care than we do.”

The president was in New York with Turnbull to commemorate the 75th anniversary of the Battle of the Coral Sea. The visit to his hometown came hours after he celebrated the passage of a healthcare bill in the Rose Garden.

Australia has government-funded universal health care, and the legislation Trump praised earlier in the day would work to remove the government’s role in health care. 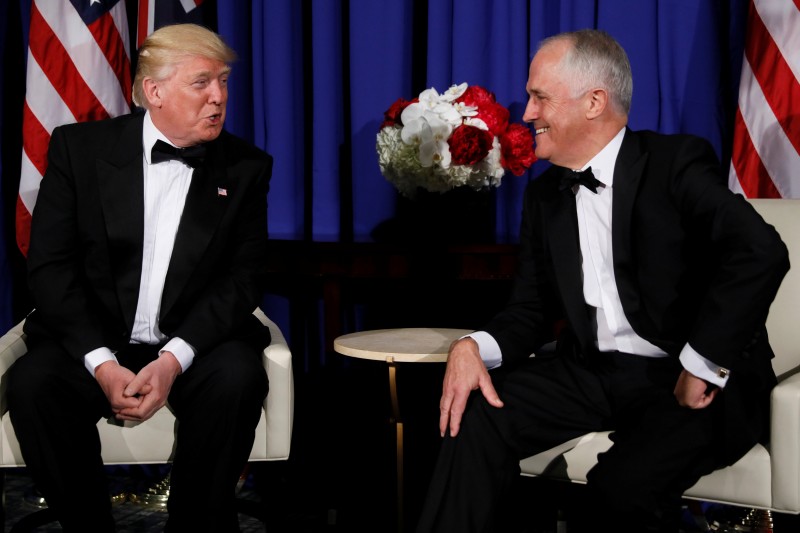 U.S. President Donald Trump (L) and Australia’s Prime Minister Malcolm Turnbull (R) deliver brief remarks to reporters as they meet ahead of an event commemorating the 75th anniversary of the Battle of the Coral Sea, aboard the USS Intrepid Sea, Air and Space Museum in New York, U.S. May 4, 2017. REUTERS/Jonathan Ernst

Sen. Bernie Sanders, who advocates for single-payer health care, reacted to Trump’s comments with laughter. “Thank you, Mr. President. Let us move to a Medicaid-for-all system that does what all other major countries do and guarantee health care to all at a fraction of the cost per capita that we spend,” Sanders added.

Trump: Australia has better health care than U.S. (they have universal health care)

Watch the reaction from @BernieSanders to @chrislhayes pic.twitter.com/zYF8NsGKF0

The president continued to talk highly of Australia’s healthcare in a tweet Friday. He wrote, “Of course the Australians have better healthcare than we do –everybody does. ObamaCare is dead! But our healthcare will soon be great.”

Trump has previously signaled support for universal coverage. He said in a January interview that he wants to replace Obamacare with “insurance for everybody.”