An illegal immigrant student at the University of California, Berkeley, suggested “beating the shit out of white people” Thursday.

“Let’s celebrate 5 de Mayo by going to Dolores Park and beating the shit out of white people, in the spirit of La Batalla de Pueblo,” tweeted Prieto, who later locked his Twitter account. The illegal immigrant student referred to a battle in Mexico in which the Mexican army defeated French occupiers. 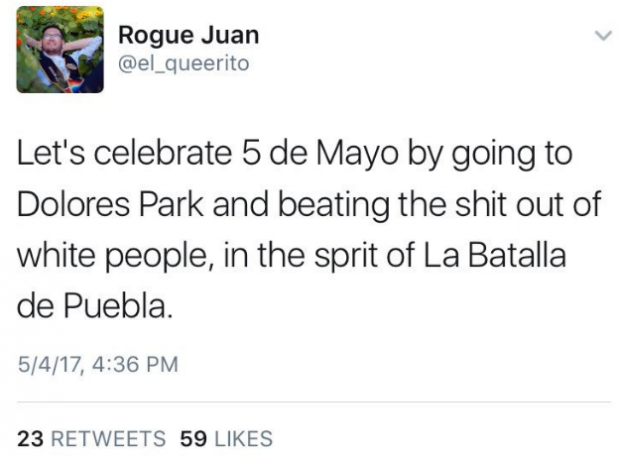 The Daily Caller News Foundation reached out to Prieto to ask about his tweet publicly encouraging race-based acts of violence. He was dismissive and insisted TheDCNF was just trying to get him bullied.

“It’s Twitter,” said Prieto to The DCNF. “I post dumb shit on Twitter all the time. Aha. But I see how this fits into your agenda, and no matter what I say, you’ll write your article so that I continuously get threats for the next two weeks until white supremacist [sic] have another person of color to attempt to silence via virtual bullying.”

The student describes himself as queer, “undocumxnted,” and a “pessimistic hoe” on his Twitter profile. “I’m an atheist because heaven has a border, and fuck borders,” his profile reads.

The English student posted his speech at the Chancellor’s Awards for Public Service ceremony to his Facebook profile.

“My mom broke legal bounds to get me here,” stated Prieto, “and that’s what we need allies to be doing.”

“I need you to break laws with us. Break the legal bounds, untie your hands because tied hands are not going to get us anywhere.”

The student explained that seeing heavy police presence at UC Berkeley “means his dad’s trembling hands when he has to lock the door when the police is [sic] in our apartment complex,” because his dad fears people will inquire about legal status.

“We’re facing a very violent presidential administration that is set on its path to destroy the families that [President Trump] promised he would destroy,” said the student.

The Daily Caller News Foundation reached out to UC Berkeley for comment, but received none in time for publication.