The woman arrested at Attorney General Jeff Sessions’ confirmation hearing claims her only offense was chuckling during the proceedings, but she wasn’t arrested only for her laughter.

Desiree Fairooz, a Code Pink activist with a history of headline-worthy protests, was found guilty of two charges Wednesday, disorderly and disruptive conduct, and parading or demonstrating on Capitol grounds, reports The New York Times.

She was asked to leave the confirmation hearing for her outbreak of laughter but was not arrested until she “created a scene” by shouting that Sessions was evil as security guards escorted her from the chamber, according to charges by the U.S. Attorney’s office in D.C.

Fairooz says she was “gobsmacked” by the verdict, according to an article she wrote for Vox, published Monday. Her lawyers “had predicted a sympathetic jury” in the District of Columbia Superior Court in Washington D.C., a city where 90 percent of voters supported Hillary Clinton in the 2016 presidential election.

Fairooz’s disruption occurred fairly early in the hearing. Alabama Republican Sen. Richard Shelby said his former colleague in the Senate representing Alabama had an “extensive record of treating all Americans equally under the law.”

“At this, I laughed,” Fairooz said. “I just thought it was ridiculous given Session’s voting record against several civil rights measures.”

In a C-SPAN video of the incident, Fairooz’s chortle can easily be heard during Shelby’s opening remarks. A few moments later, she laughs and says something indecipherable before the chairman pauses the proceedings while Fairooz is removed from the chamber.

“This man is evil, pure evil. Do not vote for Jeff Sessions,” Fairooz said as several security guards escorted her from her seat. “I was going to be quiet, now you’re going to have me arrested? For what? For what?”

Fairooz claims she did not intend to disrupt the confirmation hearing but “just wanted to be a part of the visible statement against Jeff Sessions’s confirmation.” She and several Code Pink activists were photographed wearing pink Lady Liberty hats, brandishing plastic torches, and holding signs that read “END RACISM STOP SESSIONS,” and “REFUGEES WELCOME STOP SESSIONS.”

According to D.C. legal code, it is unlawful “To parade, demonstrate, or picket within any of the Capitol Buildings.” A spokeswoman for Code Pink told The Daily Caller News Foundation that Fairooz “was aware that she had to put away her sign as soon as the hearing started. She did that.”

D.C. code also states that it’s unlawful to “utter loud, threatening, or abusive language, or to engage in any disorderly or disruptive conduct, at any place upon the United States Capitol Grounds or within any of the Capitol Buildings with intent to impede, disrupt, or disturb the orderly conduct of any session of the Congress.”

The Code Pink spokeswoman said that “Fairooz’s laugh did not disrupt the session at all.”

Multiple outlets described the charges against Fairooz as prosecution for laughter. “The US Department of Justice is literally prosecuting a woman for laughing at Jeff Sessions,” Vox’s headline reads.

Fairooz stood trial with two other people who were arrested for disrupting the Sessions confirmation. Tighe Barry and Fairooz’s partner Lenny Bianchi, who dressed in Ku Klux Klan costumes for the hearing and held signs that read “KKK” and “Go Jeffie Boy!,” were also convicted of the charges. All three will be sentenced in June. Fairooz could face up to a year in prison, up to $2,000 in fines or both.

Fairooz and the others arrested attended the hearing with the clear intent to “impede and disrupt” the proceeding, and Fairooz had “created a scene,” prosecuting attorneys told the jury, The NYT reported.

According to the prosecutors, Fairooz, “let out a loud burst of laughter, followed by a second louder burst of laughter,” the U.S. attorney’s office said in the filing. The police then tried to “quietly escort” Ms. Fairooz from the room, but she “grew loud and more disruptive,” eventually halting the confirmation hearing.

This was not Fairooz’s first time being arrested for demonstrating on Capitol Hill. When former Secretary of State Condeleeza Rice appeared before a House panel in 2007, Fairooz approached her with hands covered in fake blood and shouted “war criminal” in Rice’s face. 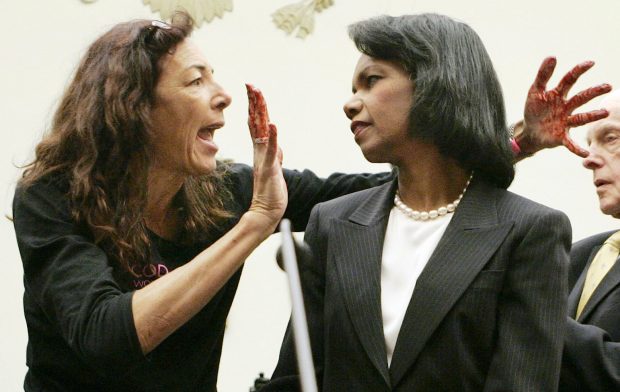 Desiree Fairooz of Texas, 50, jumps up in front of U.S. Secretary of State Condoleezza Rice before Rice testifies before the House Foreign Affairs Committee on Capitol Hill in Washington October 24, 2007. Fairooz, an anti-war protester waved blood-colored hands in Rice’s face at a congressional hearing on Wednesday and shouted “war criminal!”, but was pushed away and detained by police. At right is the committee Chairman Rep. Tom Lantos (D-CA). (Photo:REUTERS/Larry Downing)

The government dropped charges of assault against Fairooz, possibly to avoid forcing Rice to testify as the victim. The court found Fairooz guilty on one charge of disorderly conduct. She was sentenced to five days in prison and three months probation. That conviction was not brought up at Fairooz’s trial.