I’m old enough to remember when the shooting of Gabby Giffords was blamed on Sarah Palin because of a “target map” on her website that the shooter never even saw. But explicitly calling for the execution of your political opponents? That’s okay, as long as your opponents are Republicans.

An Art Institute of Washington professor recently declared that House Republicans “should be lined up and shot” for their passage of an Obamacare-replacement bill.

“They should be lined up and shot,” Professor John Griffin posted to his Facebook, according to a screenshot of the post obtained by Campus Reform, even clarifying that he wasn’t being hyperbolic, saying “that’s not hyperbole; blood is on their hands.” 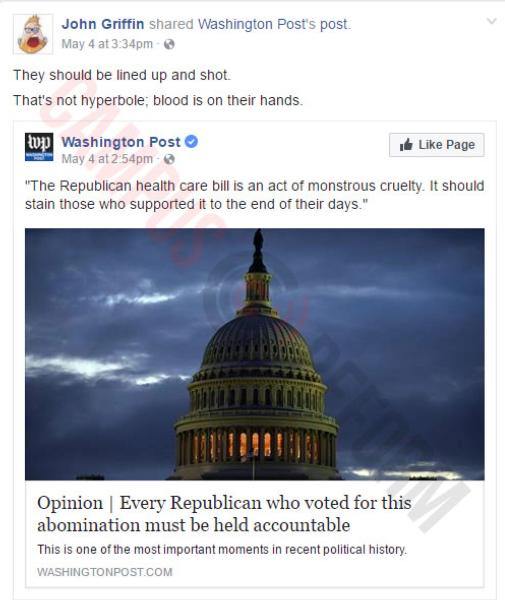 But this isn’t “hate speech” or “toxic rhetoric” or any of that stuff, because Prof. Griffin is a man of the left and he shares their goals.

Griffin has since apologized, sort of:

It’s been pointed out to me that language I had used in reference to the House of Representatives was inappropriate, especially from someone of my profession.

This is true. It is inappropriate. And I apologize for using them.

But it also speaks to the fear so many feel right now in this country.

I have a pre-existing condition. One that, without the proper treatment, will eventually kill me. The feeling of helplessness and fear that came from watching Congress’s treatment of Americans in situations like mine, and worse, led to my lashing out on social media in a way that was rash, untoward, and anathema to the way I wish to conduct myself.

See, he has health problems, and it’s the Republicans’ fault, and that’s why he called for them to be murdered. We’ve all been there, right?

Don’t worry about Prof. Griffin. He won’t suffer any professional consequences for this, because he didn’t say it about the Democrats.