The leftist group Popular Resistance showed up outside Federal Communication Commission (FCC) Chairman Ajit Pai’s house Sunday to protest his policy on net neutrality, and they plan to be there again on Mother’s Day.

“Our purpose for going to Pai’s house is to educate people in his community and throughout the country of his plans to undermine internet freedom,” Kevin Zeese, co-director of the group Popular Resistance, told The Daily Caller News Foundation Wednesday. Activists visited Pai’s neighborhood in Arlington, Va. There they placed door hangars with a picture of the chairman’s face on homes throughout the community, including Pai’s.

Zeese claimed that Pai’s house was not the priority.

“That was not our intention to go to Pai’s house, but his house was near a cul-de-sac, and there was an opening to his house. We saw his house — it was fifty feet away — and so we put one on his door,” Zeese told TheDCNF.

Zeese continued to insist that the plan wasn’t to visit Pai’s home, despite the fact that the organizing Facebook Page for the event was “Knock Knock! It’s Net Neutrality.”

The group plans to return to Pai’s home on Mother’s Day where they will stage a two hour protest from 4 p.m. to 6 p.m.

“Join us this Sunday evening for a vigil on the public sidewalk outside of Chairman Pai’s home,” a Facebook event invite reads. The group then plans to return to Pai’s house everyday until the May 18th FCC Open Meeting.

Zeese said he doesn’t feel bad about protesting outside the chairman’s house in front of his wife and young children on Mother’s Day.

“You haven’t been to his house,” he told TheDCNF. “His house is way off the road, and so I don’t think they’ll be affected by it. We’re going to be out there holding signs to get our message across about protecting the internet. We will not be blocking driveways. We will not be harassing anybody. We’ll just be holding signs on a public sidewalk.”

When pressed on the matter, Zeese continued to insist that the protest was not meant to coincide with Mother’s Day.

“It was not a factor in our decision. The key factor is that the FCC is holding its next public meeting May 18. Hallmark holidays are not my priority,” he quipped.

“He’s a public official and the public, including his neighbors, have a right to know that he is working to undermine the internet by playing favorites to his former employer Verizon and other telecoms,” he added.

Zeese went on to explain that his movement’s protest isn’t against one particular party. In the summer of 2014, Popular Resistance protested outside of former FCC Chairman Tom Wheeler’s Georgetown home.

“We did this to Democrats, too. We did this to Tom Wheeler. We went further and blocked his driveway,” Zeese said, providing a photograph of the event. 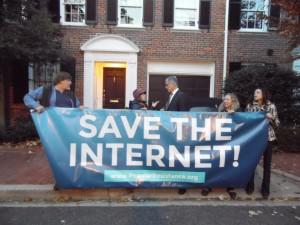 Wheeler came out and talked to the group of protesters who refused to let him pull out of his driveway with his car.

“He ended up taking a common carrier to work,” Zeese joked, using an FCC term to describe the Washington D.C. metro system.

Zeese, who served as Ralph Nader’s 2004 presidential campaign press secretary and spokesperson, was thrown out of a 2014 FCC public meeting after he and fellow activist Margaret Flowers attempted to unfurl a large banner in the middle of the event. 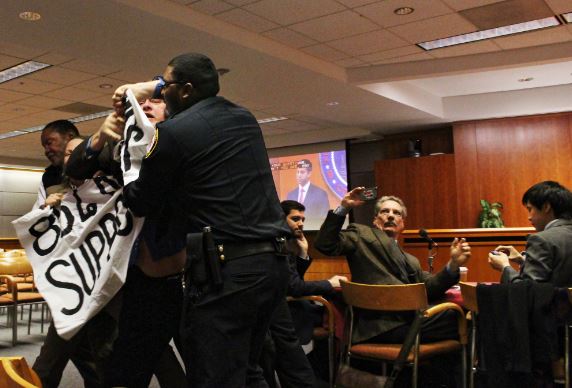 “The vicious attacks on Ajit Pai, both obscene, threatening and racist suggest the left has run out of ideas if not vitriol,” Grover Norquist, president of Americans for Tax Reform (ATR), a taxpayer advocacy group, told TheDCNF. “Ajit Pai deserves the support and admiration of every free marketer in the United States. He has stood strong for expanding free and open markets for all Americans and against rent seeking and monopoly power.”

The Alliance for Global Justice serves as the fiscal agent for Popular Resistance, according to Zeese. He said that the upcoming protests outside of Pai’s house will be funded out of their own budget and that the group doesn’t receive funding from traditional Democratic Party sources or other big donors.

“I’d love for Facebook to fund us. I’d love for Google to fund us. But they do not fund us or the movement,” Zeese asserted. “At least they’re taking the right position, and I respect that.”

“I made a major error,” Zeese said in an email to TheDCNF. “I gave an old name for our funder. The current name is Brightwater Fund.” Zeese confirmed that the Connecticut-based Brightwater Fund, a non profit that focuses on private grant-making foundations programs, is Popular Resistance’s largest donor.

While Facebook declined to comment on specifics, a spokesperson told TheDCNF that “we support strong net neutrality rules and will continue to fight for rules that protect the open internet.”

Popular Resistance was created out of the Occupy Washington D.C. protests of 2011. Zeese denounced racist comments and death threats levied against Pai on the FCC’s website and emphasized that it was not acceptable political discourse.

Editor’s Note: This story has been updated to reflect new information regarding Popular Resistance’s funding.