The walls outside bathrooms on the taxpayer-funded campus of Northern Arizona University now feature signs informing students that they have “pee privilege” if they aren’t transgender or don’t have cross-dressing fetishes.

Campus Reform obtained photos of three different signs. Two of them contain multi-color graphics and appear to be professionally made. 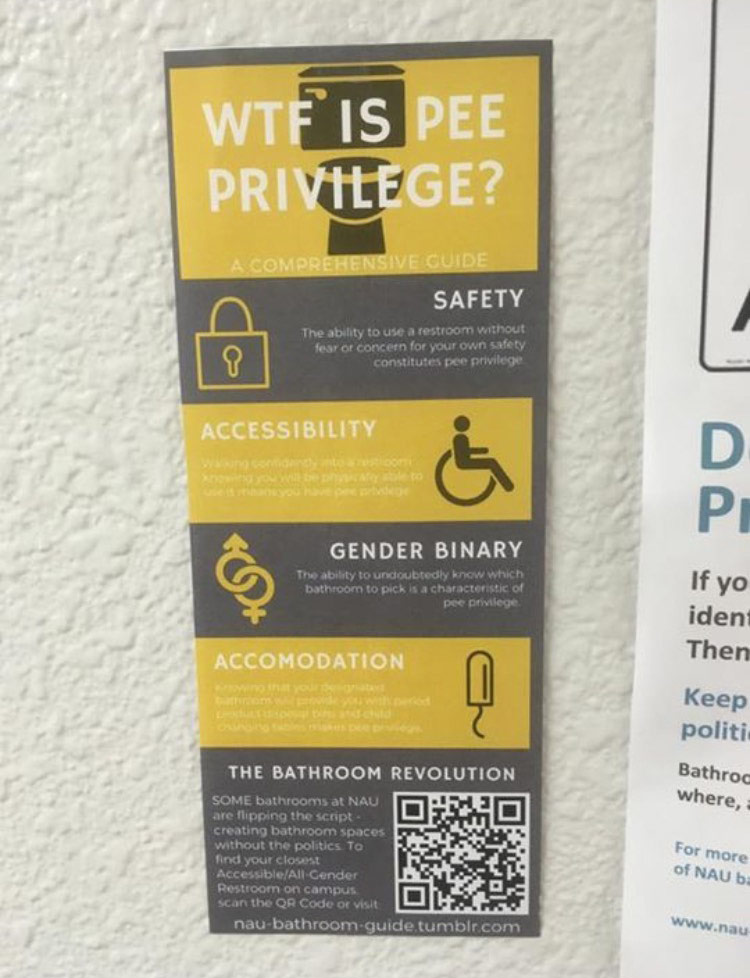 A second sign obtained by Campus Reform consists of a series of “do’s and don’ts” which students are supposed to follow when they bump into a transgender person in a public bathroom.

And “don’t question” anyone who is in the wrong bathroom because whatever bathroom a transgender person chooses to enter “is most likely where they feel the most safe.”

“Gender variant people are at high risk of verbal, sexual, and physical assault.”

The sign makes no mention of the safety or well-being of anyone else who may be in bathrooms with people who decide to choose their own bathroom. Simply “carry on with your day,” the sign advises everyone else. 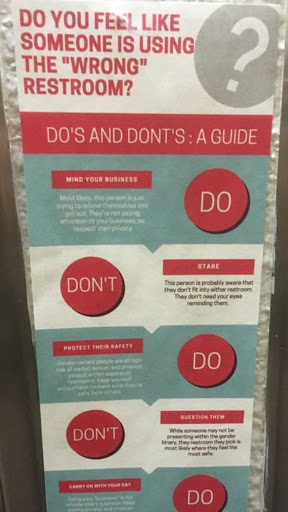 A third sign obtained by Campus Reform blatantly compares transgender people to people who are confined to wheelchairs.

“Do you have pee privilege?” the sign asks. Then it crassly orders students at the taxpayer-funded state school to “keep shit the bathroom, not in our politics.”

“Bathroom politics centers around the politicism of who, where, and how people are allowed to piss and shit,” the sign says. 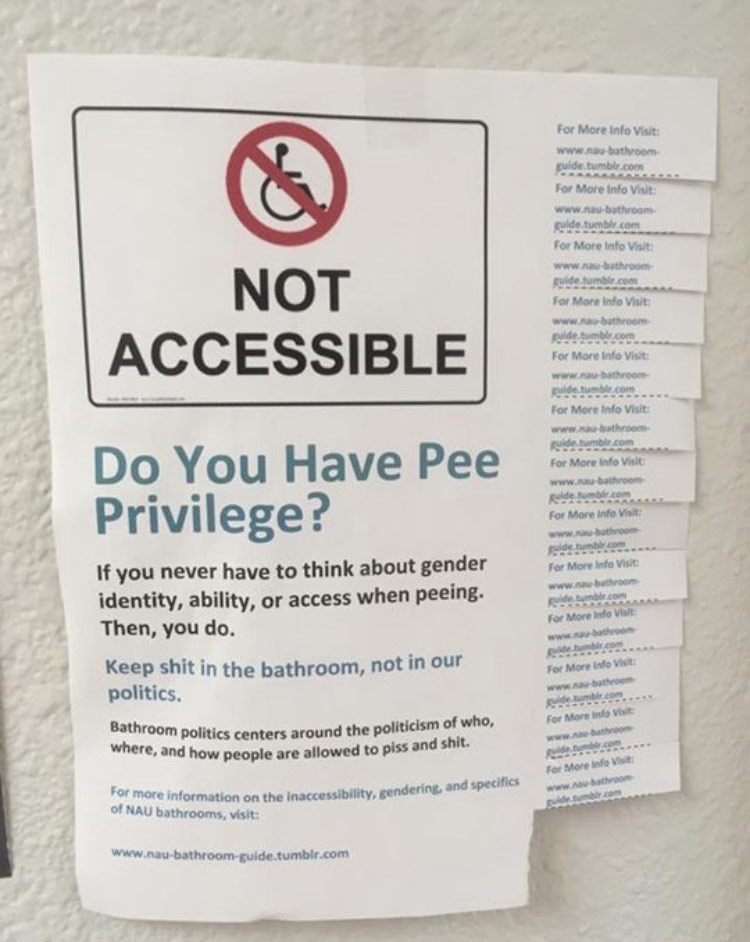 All three signs invite students to visit a Tumbr webpage entitled Bathrooms@NAU. The exclamation point-laden website offers “information on bathrooms around campus here at NAU!” Sections include “Liberal Arts Bathrooms!” and “Information for the Engineering Building!”

The Tumblr webpage suggests that the bathroom campaign on the Northern Arizona campus is related to People in Search of Safe and Accessible Restrooms (PISSAR), “a genderqueer and disability coalition composed of college students and staff” that fights the “spatially based consubstantially of shame.”

PISSAR doesn’t appear to be taking off on many campuses. A Facebook search shows PISSAR groups on two American campuses. The two groups aren’t very active and have a total of 12 members between them. One of the Facebook groups, at Clark University in Massachusetts, has two members.

Earlier this semester, a Northern Arizona University English professor, Anne Scott, docked points from a student’s paper because she used the word “mankind” in an essay instead of a “gender-neutral” option. (RELATED: Student Loses Marks For Using ‘Mankind,’ Not ‘Humankind’)

Also this semester, a group of students demanded that the president of NAU resign because she declined to endorse the concept of “safe spaces.” (RELATED: College President Rejects Safe Spaces, Students Respond By Demanding Her Resignation)