For one thing, she works for President Trump.

For another, she’s in the hot seat behind that White House podium. And it’s not an easy place to be no matter who you are. Just ask White House Press Secretary Sean Spicer, who was accused of hiding in the bushes this week when he avoided reporters by keeping himself “huddled among bushes,” as it was corrected by The Washington Post.

Sure, the deputy press secretary is folksy and has an unflappable demeanor.

But political reporters have no problem going after her no matter how nice and firm she is.

MSNBC took direct stabs at her all afternoon.

“Ultimately nobody knows what Donald Trump is going to go out and say,” MSNBC’s Katy Tur said on her network Thursday in the wake of Trump firing FBI Director James Comey. “…Donald Trump says things and his staff is forced to figure out a way to back him up. ..When can you believe what they say in front of that podium?”

And this: “You could ask Sarah Sanders about puppies running around in a park today and she’d bring up the ‘Democrats.'”

The New York Time‘s White House reporter Glenn Thrush jumped in by quoting a question from his colleague, White House correspondent Michael Shear, at the briefing. “You said you talked to countless FBI agents… really?” Sarah replied, “I don’t want to get into a numbers game.”

Thrush appeared on MSNBC Thursday afternoon and continued to slam her in the nicest way possible.

“I personally like Sarah Huckabee Sanders,” he said, initially noting her “baptism by fire” dive into the briefing room. “…That said, yesterday she was banging this drum as hard as humanly possible that Rod Rosenstein provided the rationale for the president to do this ….and today she’s says you crazy, craven obsessed media …when, in fact, that wasn’t the way it went down at all.”

On Twitter, Thrush continued quoting her. Sanders: “I gave you the best information I had at the moment.”

He called her a liar, saying, “@SarahHuckabee refusing 2 answer why she gave misleading/factually untrue answer on Comey yesterday. Now accusing press of being ‘obsessed.'”

Earlier in the day, Thrush seemed to give Sanders the benefit of the doubt and instead called Trump a liar. “Trump said he planned to fire Comey regardless of DOJ reco. Question: did he mislead @VP @SarahHuckabee who said DOJ initiated Comey firing?”

The Atlantic‘s White House reporter Rosie Gray also spotted a problem with her. “‘Our story is consistent,’ Sarah Huckabee Sanders says. It’s the opposite of consistent.”

Oliver Willis, senior writer for the liberal ShareBlue, is also not a fan. “Sarah Huckabee Sanders just making it up as she goes along,” he wrote on Twitter. He said she’s “even worse at lying” than Spicer. 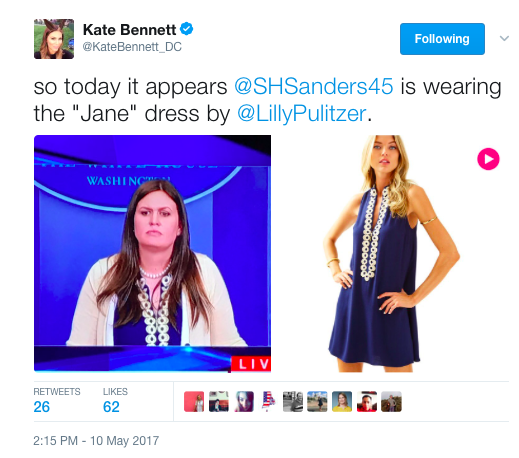 MTV culture writer and GQ columnist Ira Madison III has a beef with her. 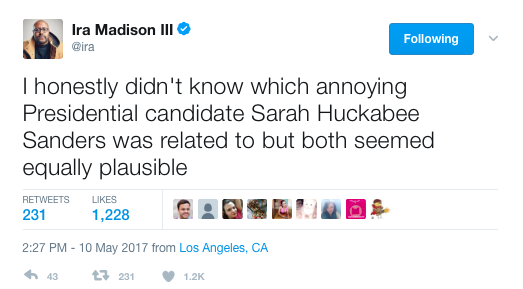 The Guardian‘s Ben Jacobs came out with this sarcastic jolt: “If Sarah Huckabee Sanders ever leaves the White House, someone should hire as a DOJ reporter. She seems incredibly well sourced in the FBI.”

Even The Daily Wire‘s Editor-in-Chief Ben Shapiro doesn’t seem to care for her. “Remember, Sarah Huckabee Sanders is supposed to be the Lou Gehrig to Sean Spicer’s Wally Pipp. Whoo boy,” he tweeted.

And NYT reporter Matt Apuzzo wasn’t shy about skewering her. 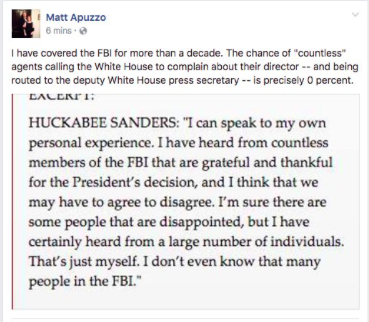