Michael Scherer and Zeke J. Miller at Time magazine spent some, er, time with President Trump earlier this week, and here’s a description of their dinner:

The waiters know well Trump’s personal preferences. As he settles down, they bring him a Diet Coke, while the rest of us are served water, with the Vice President sitting at one end of the table. With the salad course, Trump is served what appears to be Thousand Island dressing instead of the creamy vinaigrette for his guests. When the chicken arrives, he is the only one given an extra dish of sauce. At the dessert course, he gets two scoops of vanilla ice cream with his chocolate cream pie, instead of the single scoop for everyone else.

Unbelievable. Diet Coke? Thousand Island dressing? More sauce? Two scoops of ice cream? You’d never see President Hillary do this! Or, if she did, you wouldn’t read about it in Time.

If you think that’s newsworthy, then you work at CNN: 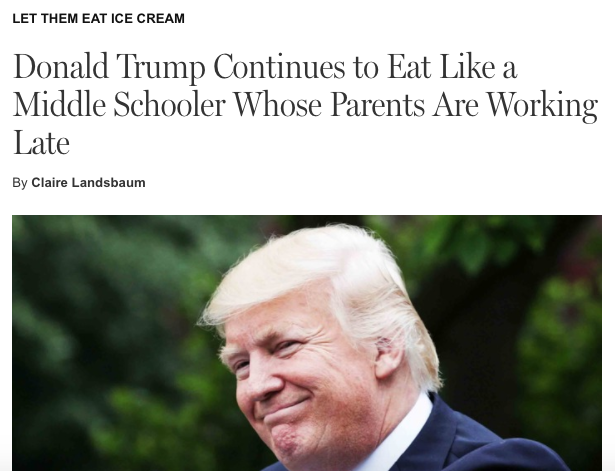 Or, of course, BuzzFeed:

Move over, Woodward and Bernstein.

As David Frum notes, more in sorrow than in anger:

This explains a lot. pic.twitter.com/TeexrVv4GK

Yes, David, it does. It explains that even with the many, many legitimate reasons to criticize President Donald J. Trump, you guys obsess over every single scrap of piddling nonsense. By the time something important actually happens, everybody’s too tired of your endless whining to pay attention.

When everything is Watergate, nothing is.