She says she never guided a 15-year-old girl participating in rape fantasies with Weiner to sell her story to Daily Mail.

Leathers surfaced this week in a spate of stories involving her, Weiner, his estranged wife, Huma Abedin, and ex-FBI Director James Comey.

In an exclusive interview with The Mirror, Leathers said she had her therapist call Child Protective Services. It’s a fact that at least two publications —The New Yorker and ProPublica, which ran identical stories — conveniently left out in their reports on the matter. The New York Daily News repeated the tidbit about Leathers helping the girl sell her sexting story. The New York Post‘s “Page Six” did not repeat it.

Here’s what Peter Elkind wrote in his May 11th New Yorker piece:

“’How can I at least make you some money?’ she said she asked the teenager. “’I basically said, ‘The only way you should do this is if they pay you.’ Certain outlets will pay you to talk, and I had made deals with a lot of them.’ Leathers’ agent alerted dailymail.com, the online version of a British tabloid with which she’d previously done business. Both Leathers and the girl received a sizable fee; the teen’s father, an attorney, helped negotiate her payment.”

Leathers is furious. She said the above quote is not hers.

“I have never been treated so poorly by anyone in the media,” Leathers told me in a lengthy conversation Thursday night over Twitter’s Direct Messaging system. “This really wasn’t something I reveled in. This was something I anguished over. It was very upsetting and I won’t sit around and let the media try to paint me as a villain AGAIN. Nope.” 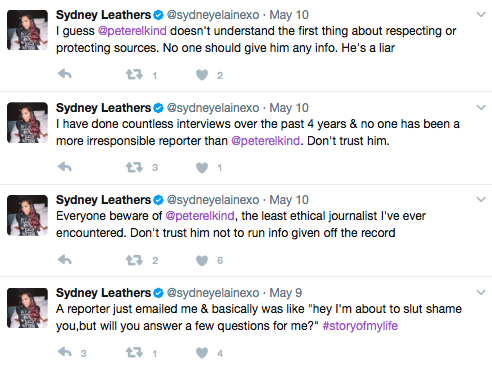 The 15-year-old girl approached Leathers with screenshots of sext messages with Weiner. Leathers immediately recognized his Facebook account. Out of concern, she sent Weiner a private message on Facebook telling him to knock it off. She also went to her therapist for help. Her therapist phoned Child Protective Services and gave them the girl’s name, city and state.

“I sent that because at the time, the teen had told me she was still in contact with him & didn’t know how to end it.” she wrote me on DM. “I thought it would scare him off. Crazy he didn’t have me blocked, right?”

“This is super awkward but you need to know something,” she wrote him on Facebook. :There’s a 15-year-old girl messaging me and she’s claiming you guys sext and skyped. And that you know how old she is. For once I’m keeping my mouth shut. I want nothing to do with this. Frankly, I hope it isn’t true. But she showed me a screenshot that looks legit to me. How have you not learned your lesson? This is another level of fucked up. I suggested to her not to talk to the press so you’re welcome but you may want to refrain from messaging anyone under 18 for gods sake. If she is really someone you’ve been talking to, you better cut that off quickly. She’s talking about potentially messing with Hillary’s campaign. I am kind of pissed to be put in this situation to be honest.”

So did Weiner reply?

“No, but he flipped out on the girl for talking to me,” Leathers said, explaining that the girl told her that Weiner got upset with her for dishing details to Leathers about what was happening between Weiner and the minor.

What infuriates her most is the way The New Yorker story portrays her to be a money-grubbing low-life.

“There’s a quote attributed to me that I never said to the girl, none of the stuff about deals with the Daily Mail should’ve been in there, they left out that I had my therapist contact CPS because it didn’t fit their narrative,” she said. “They chose to focus on my webcamming career & ignore that I graduated college lol. The whole thing was just one sided & the narrative was set up to make me look like shit yet again. When in reality, I did all I could to help this kid without getting press involved. That was the last thing I wanted.”

Leathers said she urged the girl to go to her local police — not the Daily Mail.

“She had said something about press initially and I told her to go to the local police,” she said. “She refused and said she felt guilty getting him in trouble because she felt like she was consenting. I explained to her that from a legal standpoint she cannot consent to that at 15 because she just doesn’t have the mental & emotional capacity.”

“So once she told me she wouldn’t go to the cops on her own, that’s when I had my therapist call CPS in the teen’s area,” she said. “I had her do it because I didn’t want to be too involved. I just knew somehow someone would twist it to make me look bad and here we are! I was right.”

Leathers said she really tried to help the girl.

“As far as I’m concerned I did everything I could’ve thought to do for her,” she said. “It was a messed up situation that I didn’t ask to be involved in, but I did my best to do the right thing. …I’m just glad the story got out because when the CPS attempt failed I felt pretty helpless.

When I expressed to Leathers that I found it strange that Abedin has suddenly become a socialite enthralled with the limelight, here’s what she had to say: “Uh yeah. Agreed. I hear they may not actually be separated which is super interesting to me. Who would let their child be around a man who takes photos of him next to his dick? A man that had rape fantasies about a child.”

Leathers said she’s still concerned that Weiner won’t pay a price for what he did to the girl.

“I was told he’s still being investigated, but who knows?” she said. “I’m worried he will buy his way out of this or something.” Half-joking, she added, “I know if I got caught sexting a child my ass would be thrown in prison lol so the double standard is annoying.” More seriously, she said, “The whole thing is disturbing and I am not easily disturbed.”

Asked if she ever directed the girl to Daily Mail so the girl could get paid for her juicy story, she said, “No. I have no idea how much money she made or that her dad negotiated for her. Unless they got that from them [the girl and her parents], I have no clue where that stuff came from.”

Leathers said she did not give The New Yorker the Facebook message and has no idea how the pub got it. She insists she didn’t show anyone the note she sent to Weiner.

“A fact checker from the New Yorker reached out to me but I refused to cooperate because they were using info given off the record and false info,” she wrote. “The quote attributed to me about making the teen some money was fake. I never said that to her.”

She continued, “That article was never even fact checked. The author wanted to use info given off the record (& false info) so I told the fact checker at the New Yorker I wouldn’t help him unless I was assured all false info & info given off the record was removed. I have dealt with a ton of reporters and no one has ever been this unethical. There’s even a quote attributed to me that I never actually said.”

Leathers said she’s not surprised The New Yorker got it so wrong.

“In the past the New Yorker had identified me as a poker player from Vegas (someone from Weiner’s first scandal,) so I should’ve known they wouldn’t get their story right,” she said.

So what about reports of Weiner’s alleged sex addiction?

“I don’t know if I believe sex addiction is a real thing,” she said. “I think people have impulse control problems/other psychological issues and sex just may be their focus. Lots of sex therapists don’t believe it’s a real addiction. I think Weiner has deep rooted psychological issues.”

She believes the Big Apple owes her one.

“Can you imagine if the mayor of NYC was a guy who has little 15 year old girls dress up like school girls on Skype?” she asked incredulously. “That city as a whole should be thanking me lol.”

And what about President Trump firing Comey — does she have an opinion?

“I think Trump is in deep shit. I think he’s paranoid because he knows the walls are going to cave in on him. I’m predicting an impeachment. *Fingers crossed.*”

Leathers said she has always felt villainized by the media.

“Yeah, I think it has been easy to paint me as the bad guy,” she said. “Especially because I’ve made money from my situation and because I’ve done adult work. Many people see that as irredeemable and unforgivable. Easy to make me the villain.”