The White House would not confirm or deny if there are listening devices in the Oval Office.

When press secretary Sean Spicer was directly asked for a yes or no answer on if the president of the United States is recording conversations in the Oval Office, Spicer said: “I think the point that I made with respect to the tweet is the president has no further comment.” 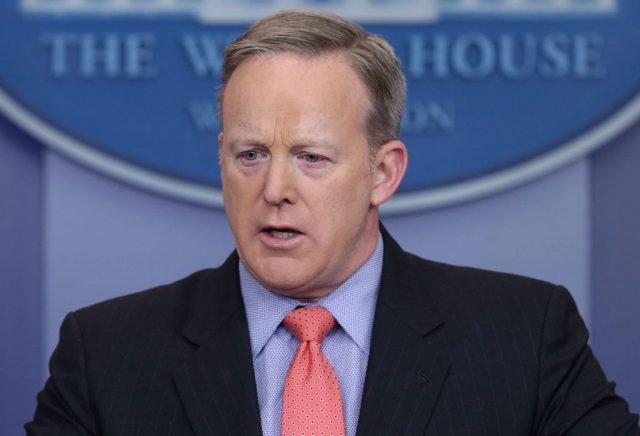 He was referring to Donald Trump’s tweet Friday morning that warned: “James Comey better hope that there are no ‘tapes’ of our conversations before he starts leaking to the press!”

James Comey better hope that there are no "tapes" of our conversations before he starts leaking to the press!

When asked about the tweet itself, Spicer said, “I’ve talked to the president. The president has nothing further to add on that.”

Spicer was pressed further: “As I mentioned, the president has nothing further to add on that.”

Are there recording devices in the Oval Office? “As I’ve said for the third time, I have nothing further to add on that.”

Trump’s remark on social media came just hours after The New York Times published an account of a dinner he shared with Comey a week after he was sworn in. According to the report, Trump asked Comey to pledge his loyalty to him, but Comey refused, saying “he would always be honest with him, but that he was not ‘reliable’ in the conventional political sense.”

The White House denied that Trump asked for Comey’s loyalty.

Spicer said Trump’s tweet cautioning Comey about potential tapes of their conversations was “not a threat,” either.

“He’s simply stating a fact. The tweet speaks for itself.”