The lobbying activities of the wife of an expected West Virginia Republican Senate candidate could harm his chances in the primary.

West Virginia Attorney General Patrick Morrisey recently revealed plans to create a super PAC  intended to support him if he runs for Senate.

Morrisey did so after West Virginia Republican Rep. Evan Jenkins announced he would run for the same seat against incumbent Democratic Sen. Joe Manchin.

However, Morrisey’s wife, Denise Henry Morrisey, is a founding equity partner and second-largest share owner of the D.C. lobbying firm Capitol Counsel, which is the only outside lobbying firm retained by Americans for Responsible Solutions (ARS).

Although Mrs. Morrisey is not listed as one of the individuals at the firm directly lobbying for ARS, firm personnel stated in a 2014 Hill profile piece that “everybody helps with every client,” regardless of which lobbyist is officially handling a client’s account.

“We all complement each other with the relationships we have on the Hill. Nobody knows everybody,” said David Jones, a Democratic campaign operative and original Capitol Counsel partner. “Everybody helps with every client, if needed.”

A major gun control lobby was not the only interest group Capitol Counsel represented. It also lobbied for Planned Parenthood on legislation that would defund the organization and prohibit taxpayer-funded abortions, The Charleston Gazette Mail  reported.

Curtis Johnson, spokesman for Morrisey, would not answer specific questions asked about the attorney general and issued a statement to the Gazette saying Morrisey would continue to speak out against Planned Parenthood funding.

“Attorney General Morrisey, like many West Virginians, is deeply disturbed by Planned Parenthood’s abortion activities and will not let political attacks and efforts to smear his wife deter him from saving precious human life,” Johnson said.

A Jenkins spokesman shot back, telling Politico in a statement, “It’s not surprising that a super PAC is doing the talking for Patrick Morrisey (though they ought to bone up on how to spell his name),” the spokesman added. “Because with Morrisey, money always talks. It does make you wonder though: given that his lifestyle is funded, in part, by Planned Parenthood’s lobbying dollars, are they funding his super PAC as well?“ 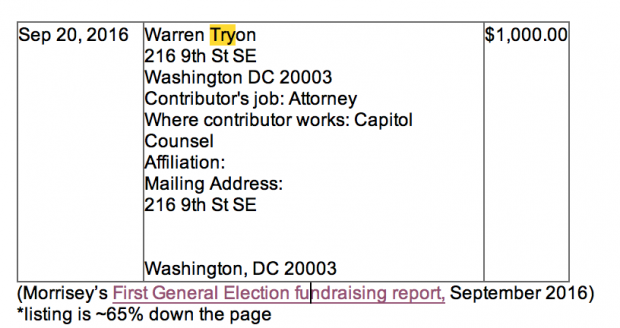 Additionally, records within the National Institute on Money in State Politics database list each of Capitol Counsel’s six shareowners – along with three more partners who have gave to his attorney general campaigns for a pooled total of more than $14,000 – indicating the firm’s strong investment into Morrisey’s political victory.

It appears to work the other way around as well. Personal financial disclosures filed with the state of West Virginia seem to show that the Morrisey Family’s standard of living relies heavily on Mrs. Morrisey’s ownership interest in Capitol Counsel.

Not including interest and dividends, the Morriseys had three sources of income that exceeded $1,000 in the past year: his employment as West Virginia Attorney General which was about $95,000 per year; her rental income estimated at $30,600 per year from a small condo she owns in Northern Virginia; and her income from Capitol Counsel.

As a result of Mrs. Morrisey’s 15 percent ownership share at the firm, and factoring in Capitol Counsel’s $16.5 million per year average lobbying revenue over the last four years, her annual income likely nears or exceeds $1,000,000 and is 85 percent to 90 percent of the Morrisey family’s annual income.

It should be noted that West Virginia law defines “marital property” as “[a]ll property and earnings acquired by either spouse during a marriage” and “presume[s] that all marital property is to be divided equally between the parties” in a circumstance of a separation.