Bodyguards working for Turkey’s authoritarian president, Recep Tayyip Erdogan, were involved in a massive brawl that left nine people injured outside of the residence of Turkey’s ambassador in Washington, D.C. on Tuesday.

The melee, which was caught on video, occurred just after Erdogan met with President Trump at the White House.

Protesters critical of the Turkish government claimed that Erdogan’s bodyguards or security staffers working for the Turkish embassy launched the attack. Video of the fight showed men in suits kicking people, some while they were on the ground. The footage shows some victims covered in blood.

Aram Suren Hamparian, the president of the Armenian National Committee of America, filmed some of the incident and says he believes that the instigators were Erdogan bodyguards or security personnel working for the Turkish ambassador.

“They just literally broke through the line, crossed the street, and stopped the protesters,” Hamparian told The Daily Caller by phone.

Hamparian, who is highly critical of Erdogan, said that two dozen anti-Erdogan protesters, mostly Armenian and Kurdish, were protesting peacefully across the street from the residence. He said that the onslaught broke out suddenly. He says the videos show that the pro-Erdogan fighters appeared to be professionals of some sort. He also said they outnumbered the protesters. 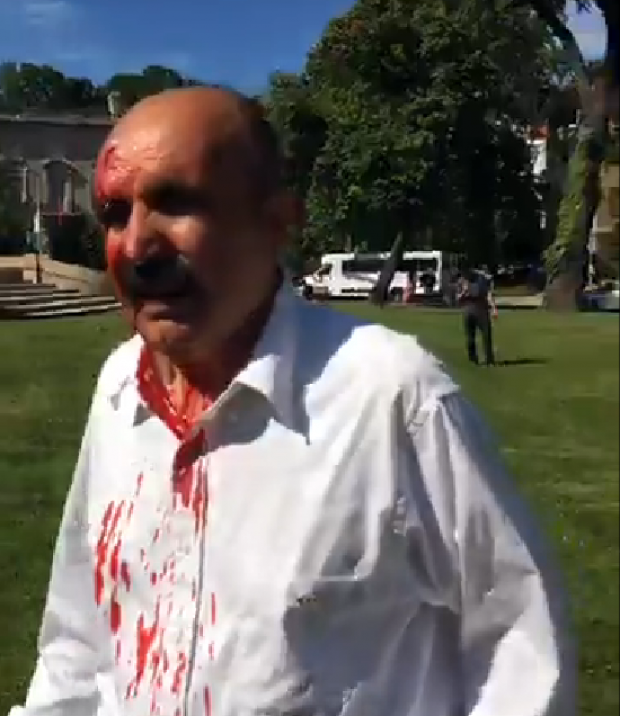 “It all took place at once. It was by very capable people. It felt to me, it looked to me like a highly orchestrated attack,” he added.

Hamparian said that some Erdogan supporters were not violent. He said that he spent most of the night at the hospital with some victims of the attack. One man who Hamparian helped received between 10 and 15 stitches, he said. Another woman underwent a CT scan.

Halil Mutlu, a cousin of Erdogan’s and a board member of the Turkish American Steering Committee, was spotted on the sidelines of the fray. At one point he was seen leading a pro-Erdogan chant aimed at the government critics.

Tuesday’s brawl harkens back to Erdogan’s visit to Washington, D.C. in March 2016. During a visit to the Brookings Institution, Erdogan’s bodyguards verbally and physically assaulted a group of protesters.

Washington, D.C. police appeared to struggle to contain the incident. According to The Guardian, two arrests were made.

After the battle subsided, Erdogan appeared outside of the ambassador’s residence to speak with supporters.

At the hospital w/members of our #Kurdish-American community who were attacked by #Erdogan‘s bodyguards & supporters during a protest in #DC pic.twitter.com/JmXdAqm7rb