CNN and MSNBC largely ignored breaking news of a terror attack Monday night in England for nearly an hour to rehash news about President Trump and accusations his campaign colluded with Russia during the election.

Initial reports of explosions at an Ariana Grande concert in Manchester came in around 6 p.m. EST, and Fox News began extensive coverage of the attack around 6:50 p.m. By then at least 20 were reported dead and hundreds wounded in what was quickly becoming a clear instance of a major terror attack.

CNN’s Erin Burnett and MSNBC’s Chris Matthews were obviously eager to dive into the Washington Post report at the top of the 7:00 hour, and their segments were literally torn between that news and news of people getting blown up at the concert. WaPo reported that Trump asked two top U.S. intelligence officials to publicly deny the existence of any evidence his campaign colluded with Russia.

CNN and MSNBC briefly cut to news of the attacks before 7 p.m., but both networks opted to devote the bulk of the following hour to a discussion of news regarding the report on Trump and Russian collusion accusations. MSNBC devoted just 26 minutes of that hour to news of the massive terror attack. And CNN covered the attacks for just under 20 minutes.

“Police say there have been a number of fatalities and a serious incident after a concert at Manchester arena,” Matthews said in the opening of his segment. People at the arena are heard screaming in the background of his segment, as a video clip from the arena plays. “A senior U.S. intelligence official tells NBC news there has been an explosion. We’ll get the latest on that in a minute.”

“We begin however, with the shocking news in Washington tonight,” he continued, quickly switching to a topic deemed more important. Matthews spent the next 20 minutes discussing the report on Trump, before briefly getting back to the attack.

Burnett did not even mention the attack at the beginning of her segment on MSNBC. Viewers who tuned in at 7 p.m. would have had no clue the attack was happening until about 17 minutes into her show.

“Breaking news — a stunning report,” she said in her opener, teasing the report on Trump and a silly dispute over whether Melania batted his hand away on their trip Monday, but making no mention of the terror attack.

“I’m going to talk to the Washington Post reporter breaking this story,” she said. “Trump and Israel denying something he was never accused of — did he incriminate himself? And the presidential putdown. Did Melania refuse to take the president’s hand?”

Ten minutes later, here’s what the screens on CNN and MSNBC looked like: 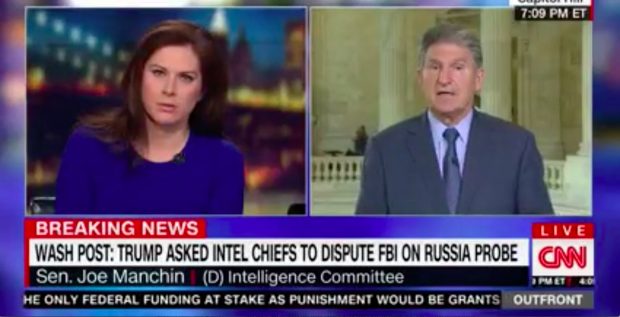 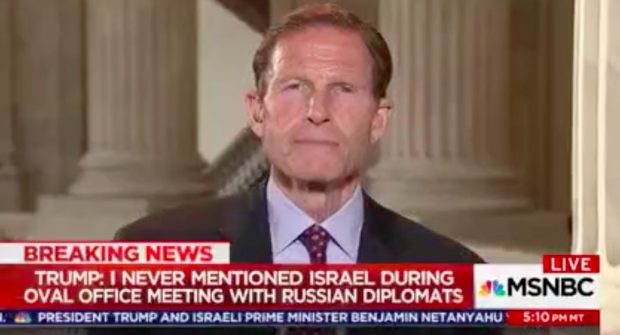 About two-thirds of the way into their respective segments, CNN and MSNBC gave way to the more compelling breaking news story and finally switched coverage back to the terror attack for the remainder of the hour. Both networks had spent more than 30 minutes ignoring the attack in order to focus on the negative Trump news.

While some of the details of the Washington Post report are new, the thread of the Trump campaign asking intelligence officials to tamp down on media reports accusations of collusion with Russia is old news. Reports circulated as early as February that Trump’s chief of staff Reince Priebus asked the FBI to deny reports that campaign advisers were communicating with Russian intelligence agents during the campaign.