Just as soon as IJR finished digging itself out of the rubble of its last disaster, the pub blew itself up again.

On Monday, the psychotically right-leaning news outlet wrote a story by Jenni Fink in which it slammed CNN’s Andrew Kaczynski (a.k.a. KFILE, previously of BuzzFeed.) As soon as Journo Twitter freaked out, IJR suddenly had an epiphany: KFILE is an acclaimed reporter and not someone who deserves to be shamed.

The whole mess began after Kaczynski broke the completely and ridiculously inflated story that Milwaukee County Sheriff David Clarke sourced portions of his 2013 master’s thesis with footnotes instead of quotation marks. The Naval Postgraduate School in Monterey, California, apparently has a policy by which students must use quotation marks.

In Kaczynski’s mind, this is PLAGIARISM. 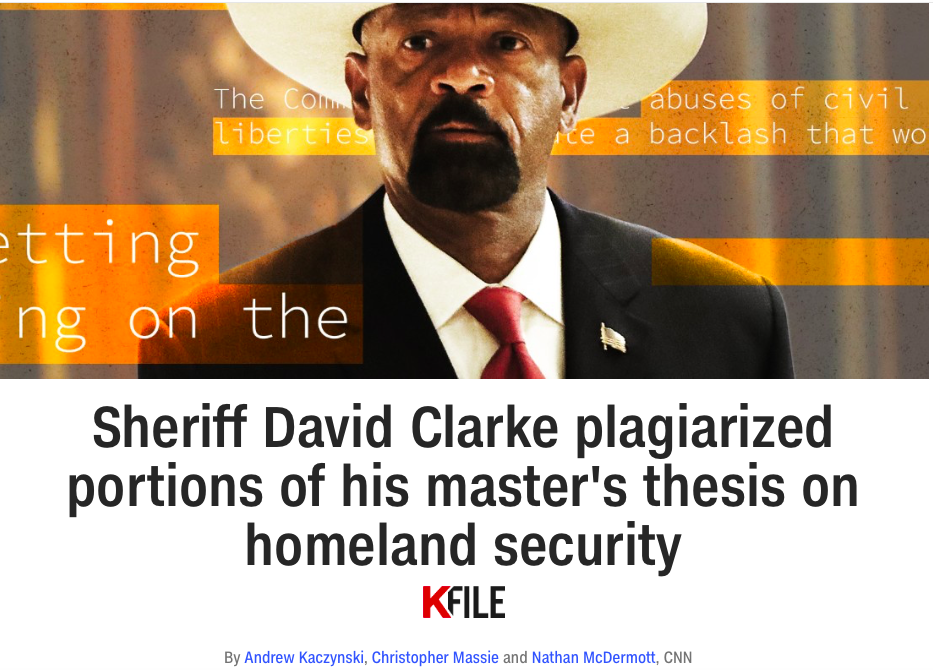 Clarke is reportedly taking a job with the Trump Administration as an assistant secretary in the Dept. of Homeland Security. But it’s not a sure thing as Trump has reportedly not assured him that he has the job.

Over the weekend, Clarke called Kaczynski a “hack” and a “sleaze” on Twitter. 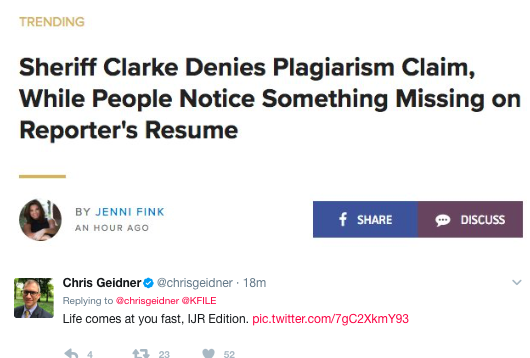 The story crapped on Kaczynski for not having a college degree, which didn’t go over so well on Twitter.

“This is trash, & it says more that a reporter at IJR thought (or, more likely, was told) that this was a good idea,” BuzzFeed Legal Editor and former Kaczinksi co-worker Chris Geidner voiced on Twitter.

New York Mag’s Jesse Singal wrote, “If I worked at IJR I’d be even more embarrassed than usual today.”

Think Progress‘s Senior Editor Ned Resnikoff added, “Do I even need to point out the irony in IJR giving a slimy defense of plagiarism?”

The Daily Beast‘s Gideon Resnick had this to say: “That IJR story is embarrassing and there are so many better ways to make fun of @KFILE anyway.”

And BuzzFeed‘s Matthew Zeitlin remarked, “This may be the single dumbest thing IJR has ever published.”

But that’s actually not true. IJR employees once had a discussion on Twitter about ranch dressing that tops their stupid list.

IJR senior editor Jason Howerton wrote this: “Dumbest attack ever to say someone didn’t finish college,” he wrote. “I learned 99 percent of career on the job. Stupid and elitist even.” CLARIFICATION: Howerton was responding to Kaczynski, who wrote: “Things that are not defenses of Clarke photoshopping poop on my head calling a snowflake mocking my eyebrows noting i didn’t finish college.” 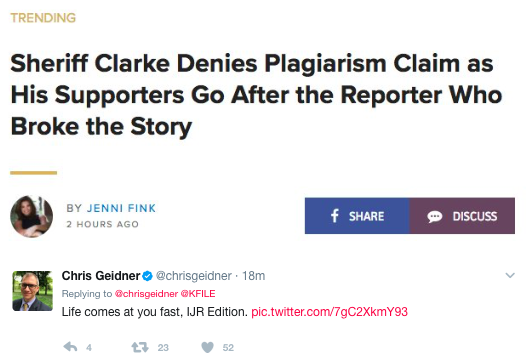 Here’s the note added to the end of the story:

Who is going to quit, get suspended or sent to training for this one?

Johnson was previously fired from BuzzFeed for plagiarism, despite the fact that the site eventually removed thousands of stories from the site for not being up to snuff. IJR suspended and supposedly — psst…but not really — demoted him and forced him into sensitivity training. Content editor Becca Lower was also suspended. And congressional reporter Joe Perticone, who wasn’t involved in the fiasco, fled to pursue a freelance writing career.

The purpose: To present the other side.

Listen IJR, if you’re going to stick it to a reporter, don’t cave just because Twitter mocks you.

Journalism 101: This isn’t fourth grade. Spinelessness doesn’t work. If you drastically change a story and don’t bother to explain why you’ve suddenly taken a pointedly different point of view, you’ve just pulled a pin out of a hand grenade.

The Mirror reached out to IJR founder and CEO Alex Skatell for comment.

None was forthcoming by press time.