“MULTIPLE CONFIRMED FATALITIES at Manchester Arena. The last time I listened to Ariana Grande I almost died too,” David Leavitt, a freelance writer who has written for CBS and Yahoo, tweeted. 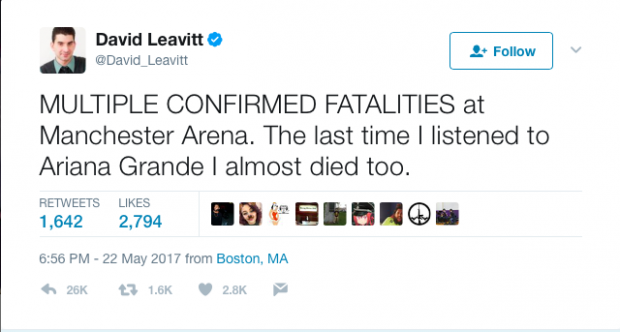 Leavitt tweeted another tasteless joke shortly after, writing, “Honestly, for over a year I thought an Ariana Grande was something you ordered at Starbucks.” 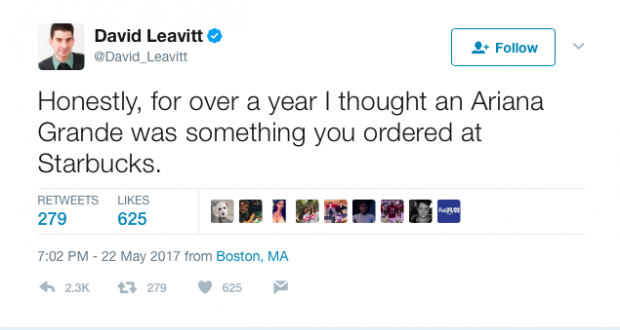 After getting significant backlash for the thoughtless tweets, Leavitt tried to justify and walk back the tweets, asking, “too soon?” and eventually writing, “Sorry 4 offending. Didn’t realize the magnitude of the tragedy. I always make stupid jokes about whatevers trending. Condolences 2 families.”

CBS, who has published some of Leavitt’s freelance work before, publicly disavowed him.

.@David_Leavitt does not work for @CBSNews.

Still, Leavitt hasn’t deleted the tweets or offered a real apology, and people are unloading on him.

@David_Leavitt Dude, no. Delete and sincerely apologise to save yourself a shred of grace and dignity. Don’t just carry on joking, you plum.

@David_Leavitt This what the delete feature is for.

@David_Leavitt you’re an embarrassment to boston (and earth). what if someone said this shit after the marathon bomb? don’t be an asshole for attention.