Donald Trump denied that he told Russian officials Israel was the source of the classified information he revealed to them during an Oval Office meeting earlier this month, though it was never reported that he did.

As he met with Prime Minister Benjamin Netanyahu in Israel Monday, the president emphasized that he did not say Israel was the source of the classified information: “I never mentioned the word or the name Israel. Never mentioned during that conversation. They’re all saying I did, so you have another story wrong.” 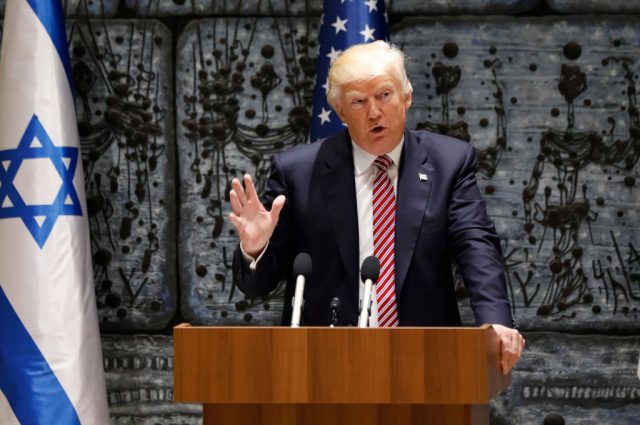 Netanyahu followed up on Trump’s remark by saying: “Intelligence cooperation is terrific. It’s never been better.”

The Washington Post reported that Trump revealed sensitive intelligence about an Islamic State terrorist threat to two Russian officials — Foreign Minister Sergei Lavrov and Russian Ambassador Sergey Kislyak — in an Oval Office meeting earlier this month. Though the New York Times later reported that the information he told the Russians was known because of U.S. sources in Israel, it was never reported that Trump told the Russians where the information came from. In fact, his national security adviser H.R. McMaster told reporters Trump was never briefed on the source.

“The president wasn’t even aware where this information came from,” McMaster told reporters on May 16. “He wasn’t briefed on the sources and methods.”

“We don’t say what’s classified, what’s not classified,” McMaster said. “I can say again that what was shared was wholly appropriate. The president in no way compromised any sources or methods in the course of this conversation.”

McMaster: “The President in no way compromised any sources or methods in the course of this conversation” https://t.co/KHBbHDDZoE