Donald Trump hopes to balance the federal budget within 10 years through massive reductions in spending for entitlement programs like food stamps and Medicaid.

The fiscal 2018 budget the administration will send to Congress Tuesday is built around some of the president’s biggest campaign promises, like an optimistic economic growth of three percent and boost in defense spending. But it also calls for a wave of cuts to benefit programs — $800 billion from Medicaid, $192 billion from food stamps and $272 billion at large from welfare programs. 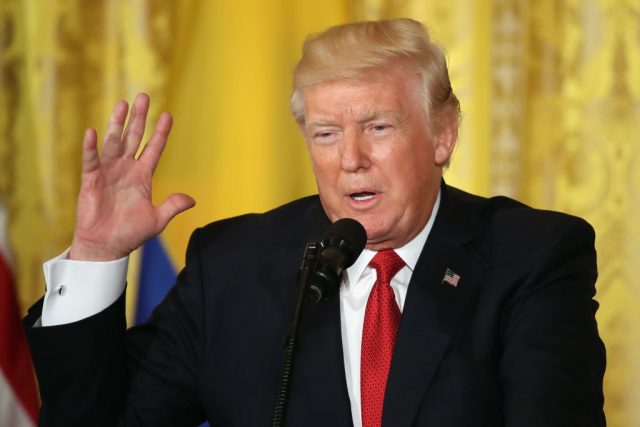 Office of Management and Budget Director Mick Mulvaney explained the cuts as he outlined the proposal for reporters at the White House Monday. Though he said he believes in the “social safety net,” Mulvaney justified the $192 billion reduction in food stamps by saying the number of Americans receiving Supplemental Nutrition Assistance Program never lowered after it spiked during the recession.

“They have not come down like we would expect them to do,” Mulvaney said. “In fact, they stayed at very elevated levels. I think that raises a valid question: Are there folks on SNAP who shouldn’t be? We do have an able-bodied requirement. We also look to states to help here.”

The budget also calls for preventing illegal immigrants from receiving the child care tax credit or the earned-income tax credit. Mulvaney said “it’s not fair and it’s not right” to allow people who live in the country illegally to benefit from these, and hopes to save $40 billion over the next ten years by requiring those who receive it to have a Social Security number.

Mulvaney said: “How do I go to somebody who paid their taxes and say, ‘Hey, I want you to give this earned income tax cut to someone who works here illegally’? It’s not unreasonable to ask for a Social Security number.”

The administration noted these were “hard,” but “necessary” choices.

In order for the budget to work, Mulvaney said: “We need folks to work. We do. We need people to go to work. If you’re on food stamps, and you’re able-bodied, we need you to go to work.”

It largely leaves programs like Social Security and Medicare alone.

The budget, which has been nicknamed “The New Foundation for American Greatness” by the administration, also touts a parental leave program that was championed by Ivanka Trump and would provide six weeks of paid family leave for fathers and mothers, including those who adopt.

“This is the first time in a long time that an administration has written a budget through the eyes of the people who are paying the taxes,” Mulvaney said. “I can’t remember last time we looked at it through perspective of someone who was paying it.”