Milwaukee County Sheriff David Clarke never acted like a man who was going to run for Senate in 2018. He never formed an exploratory committee. There were no reported meetings between Clarke and the Republican donors whose help would be needed for such a bid. There were none of the telltale signs of a political figure considering taking a career-changing gamble. In fact, it was the opposite.

But third-party actors unaffiliated with Clarke told an entirely different story to thousands of grassroots Republicans: Clarke isn’t just going to run, he’s going to win, they said — if you give us enough money to convince him.

Clarke may not be running for Senate, but a whole lot of small-dollar donors gave money that they were told would help him win. And unlike the handful of wealthy donors who usually fund super PACs, individual small-dollar donors wield virtually no influence over how the PAC spends their money.

At the same time Clarke’s book was hitting shelves, operatives with several super PACs were using Clarke’s name to ask grassroots Republicans for money. The Milwaukee Sentinal-Journal noted that at least four shady, out-of-state political groups were asking voters to fund a non-existent Clarke run for Senate. The PACs weren’t affiliated with Clarke, but their operatives gave potential small-dollar donors the impression that their money would help Clarke defeat Democratic incumbent Tammy Baldwin in 2018.

The largest and most successful of those PACs was the Draft Sheriff David Clarke for Senate PAC, which was founded by Jack Daly, a less-than-well-known political operative. The PAC’s board members include reality TV star Duane “Dog the Bounty Hunter” Chapman. 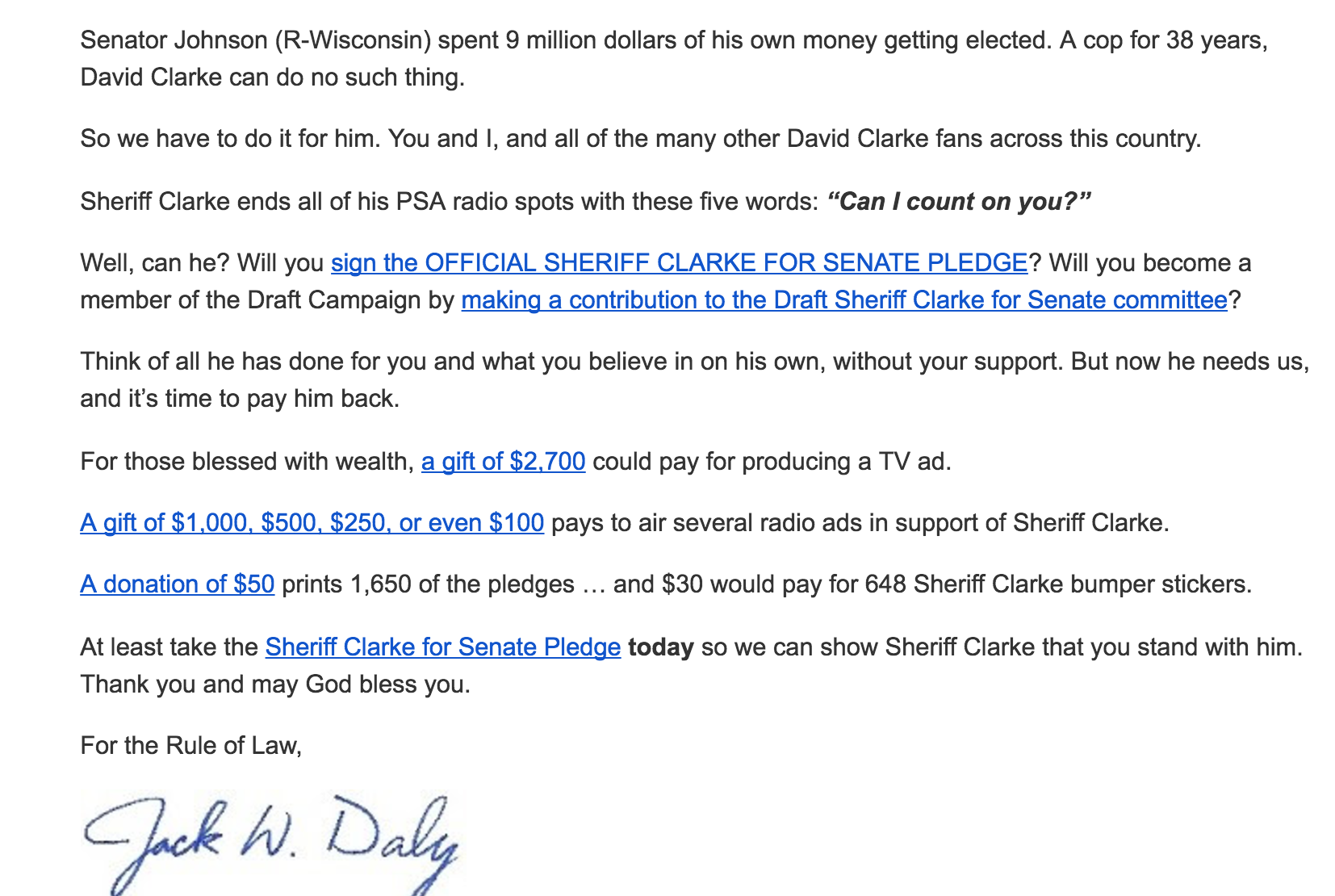 The PAC frequently made racial appeals for money, citing alleged “roving mobs of black youths who have been trashing malls across the country” as a reason to support Clarke’s fictional Senate bid. The emails asked voters to help the “Black John Wayne” or the “Black Rush Limbaugh with a Badge” defeat the “left-wing lesbian extremist.”

In its first month of operation, the PAC received more than $300,000 from 5,886 donors, Daly told the Milwaukee Journal Sentinel in February — roughly $50 per donor. 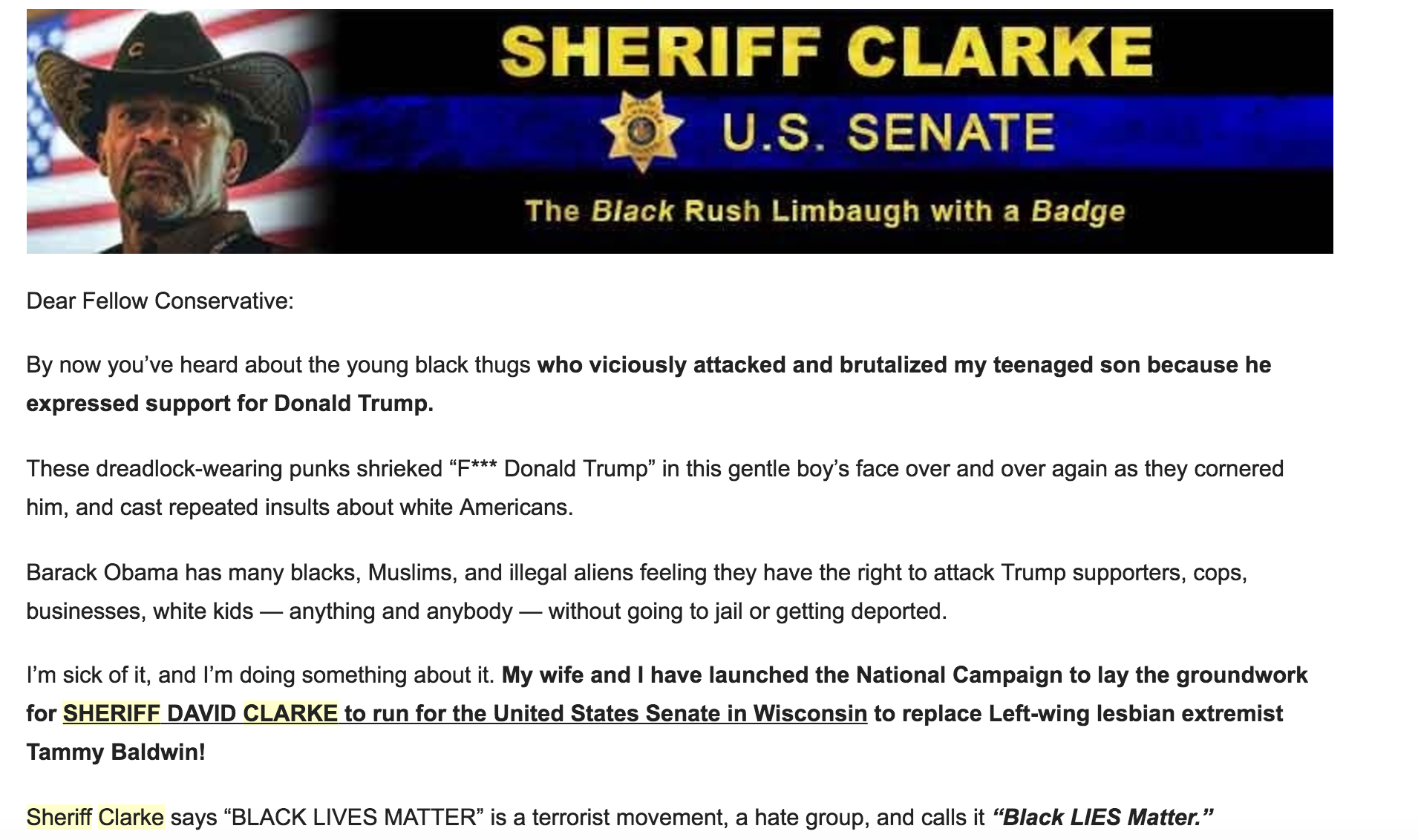 Fundraising emails implied to potential donors that their money would help “The Black Rush Limbaugh with a Badge.”

The PAC targeted potential donors through direct mail ad campaigns — which are known for being more effective with older voters. One ad agency notes that older voters are “most likely to be reachable via direct mail.” Another says: “older Americans pay even more attention to their mail than any other group.”

The vast majority of the PAC’s funding, Daly told TheDC, has gone towards fundraising and ad campaigns.

More than 100,000 people signed the PAC’s “pledge” supporting Clarke’s non-existent candidacy, Daly proudly told TheDC. The PAC gained some if not all of those pledges by renting out email lists from other conservative organizations and asking potential donors to sign the pledge supporting Clarke with their name, email and zip code. The pledge page includes a pre-checked box to receive “the campaign’s weekly update via email!”

Email lists are valuable to PACs in two ways: it’s an easy way to ask known supporters for money, and it allows them to loan out those names and email addresses to other PACs — for a price. Political organizations will often dish out tens of thousands of dollars for access to ready-made email lists of potential donors.

Daly’s PAC is using Eberle Associates for its direct mail campaign, according to a native advertisement the group placed in Newsmax. Eberle advertises to clients its ability to “coordinate your internet fund raising initiatives with direct mail. Direct mail is a key way to increase your e-mail lists, as well as identify new online donors.”

Eberle’s website tells potential clients that their candidate needs to “take strong stands on emotional or controversial issues” for a successful direct mail operation, later adding: “Unless your appeals use techniques that ‘command’ a response and unless they use emotional, ‘now-or-never’ phrases constructed from simple, everyday words, don’t expect them to succeed. It’s not going to happen.” True to form, Daly’s PAC made emotional appeals when asking for Clarke supporters’ money. 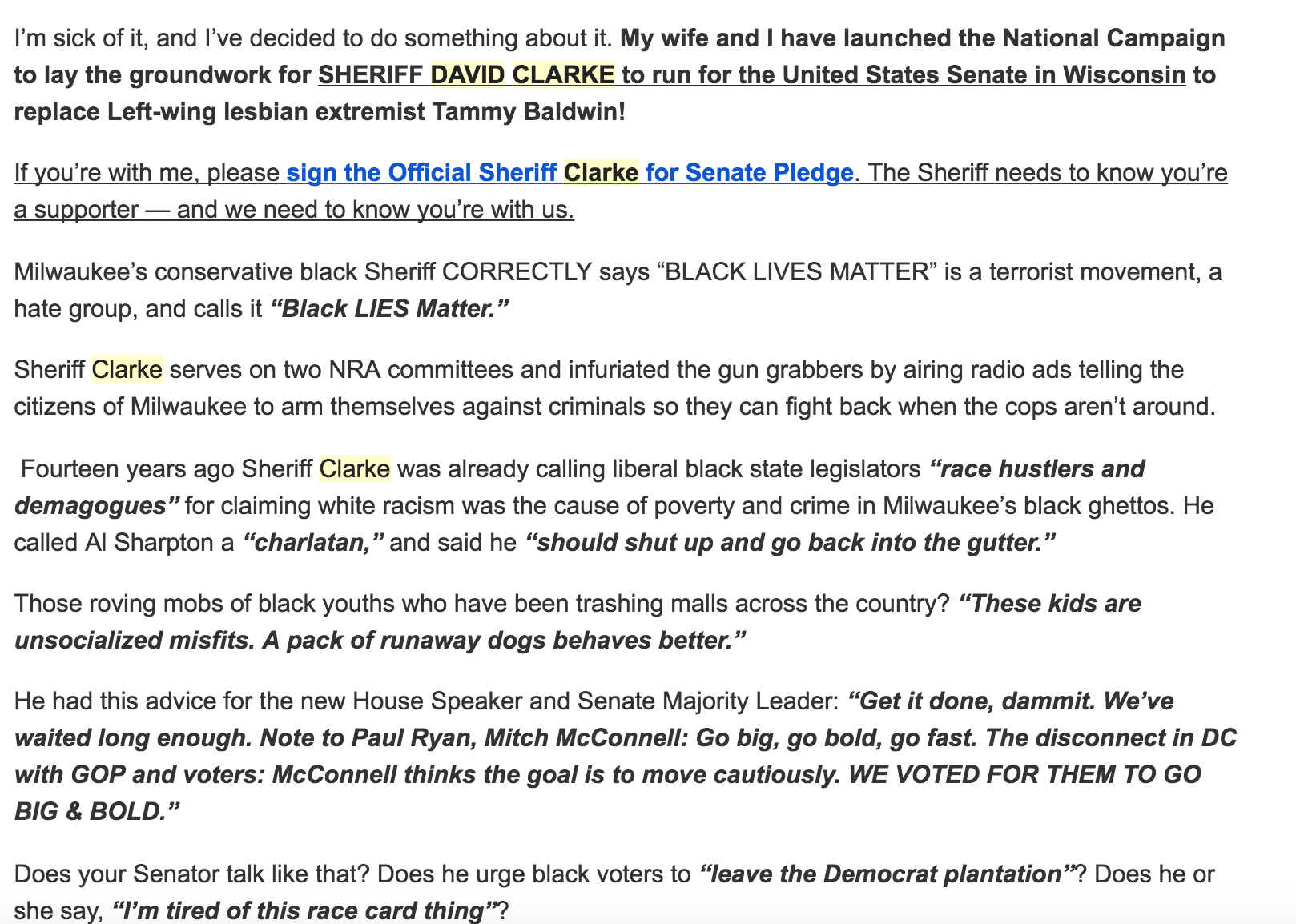 The fundraising pitches relied on racial imagery in asking for money

A similarly shady super PAC also used Eberle for its direct mail campaigns. That PAC’s operatives claimed they were working to get Ben Carson elected but paid millions of dollars — much of which came from retirees — to themselves and friendly contractors, including Eberle. As with Daly’s PAC, the pro-Carson PAC relied on emotional appeals to ask for money, telling potential donors to give so that their “grandchildren will live under freedom, not Socialism.”

The Pro-Carson PAC, which started out as a “Draft Carson” effort, abandoned its  scheme after Carson called them out on Facebook for floating his name as a possible vice presidential pick to raise money. That PAC later resurfaced and has since changed its name to “The Stars and Stripes Forever PAC.”

Daly’s PAC has used Stars and Stripes’ email list — which numbered in the hundreds of thousands as of last year — at least twice, encouraging conservatives to donate to the PAC and sign the pledge to support Clarke.

A disclaimer at the bottom of the pledge says “Paid for by Sheriff David Clarke For U.S. Senate,” giving the initial indication of being from an actual campaign, adding in parentheses: “(Official Draft Campaign).” But there’s nothing “official” about the PAC other than its name — Clarke hasn’t endorsed the PAC and isn’t even running for Senate. When Clarke was asked about the PAC’s efforts on “Fox & Friends” in March, he largely dismissed the efforts and said, “They’re gonna have to get me in there kicking and screaming.”

Even after Clarke announced he was accepting a top position within the Department of Homeland Security — effectively killing what was already a non-story about a potential Senate run — Daly pressed onwards, issuing a statement titled “From Sheriff to Asst. Secretary to U.S. Senator!” The page reassures Clarke supporters that “the national prestige this will confer upon him is significant” and will “increase his viability as a challenger to Tammy Baldwin in the Senate election.”

The rest of the site is still open and accepting donations. (For just $99, you can get a Sheriff Clarke bobblehead.) Daly insisted that he is operating the PAC as “an affair of the heart, not of the pocketbook.”

“I have taken not one red cent since the first dollar came in,” Daly told TheDC, “notwithstanding the fact that my service as its primary administrator would justify the kind of hefty salaries many PAC administrators get.”

“As I hear occasionally from my long-suffering wife, I have actually lost many thousands of dollars on this endeavor,” he claimed, adding that he has another full-time job in addition to his work for the PAC.

If Daly is somehow “many thousands of dollars” in the red, it would be a fraction of what his PAC took in since its founding in January. Emails sent to Clarke supporters told them that Clarke “needs us, and it’s time to pay him back” (by giving money to Daly’s PAC). “For those blessed with wealth,” the PAC recommended giving $2,700, which “could pay for producing a TV ad.”

Today, more than 20,000 donors have given to the PAC, Daly told TheDC. (He prefers to use the term “patriots” instead of “donors.”) When asked by TheDC, Daly said he would share neither fundraising figures nor spending numbers before the July 31 semi-annual filing, out of concern that Baldwin would use the figures to motivate her Democratic donors.

Daly told TheDC that he will be “disappointed” if Clarke, who has said he’s not running for Senate in 2018, doesn’t run for Senate in 2018. “But the contributor and volunteer lists we develop for Sheriff Clarke and the research into Tammy Baldwin’s sickening voting record will certainly have tremendous value to whoever the eventual GOP nominee is. No one has done the kind of job we have uncovering that woman’s record of extremism,” Daly claimed.

“The time and money spent uncovering that and bringing it to the attention of the voters of Wisconsin will inure to the benefit of the party regardless of what the High Sheriff does. Plus, money spent supporting the political future of a good man is never truly wasted,” Daly said of the hundreds of thousands of dollars donors entrusted to his organization, before hinting at another Clarke campaign rumor: “For example, if Sheriff Clarke doesn’t file against Tammy Baldwin next June, many folks hope and expect he’ll run for retiring Senator Ron Johnson’s open seat several years later.”

Clarke, age 60, has given zero indication that he will run for Johnson’s seat when it opens up — in 2022.

“We understand the skepticism of those who assume the only reason any PAC exists is so that some consultant can make a dollar; we share their concern when we see what some of these unscrupulous hacks are doing out there,” Daly said. “But we will laugh heartily in the face of anyone who conflates the one and only Draft Sheriff Clarke for Senate PAC with the notorious scam-PACs.”

Even if Daly hasn’t paid himself any money, and even if he stops pressing small-dollar donors for their money — which he’s given no indication is the case — he can still capitalize by renting out his email lists to other organizations seeking donors.

In a phone call with TheDC after this story was published, Daly indicated that his PAC is likely to rent out their email list to other organizations.

This article has been updated to include Sheriff Clarke’s confirmation on “Fox & Friends” that he had no plans to run for Senate, as well as Daly’s confirmation that the PAC is planning on renting out their email list.