And it was rough.

“I recoiled,” Bush told ABC “GMA” host Robin Roberts Wednesday morning in his first TV interview since being stripped him of his cushy NBC “TODAY” Show job last year. “I said, oh my gosh. For me. I remember the guy on the other side and I can tell you 12 years ago, I was insecure, I was a pleaser. I kind of remember wanting these celebrities to like me so I could continue in this job.”

On the tape, the entertainment reporter appeared to egg Trump up on as he spoke of trying to “fuck” his married co-worker Nancy O’Dell and said he was so powerful that he could “grab em by the pussy.” Bush recently apologized to her in a private note, which she discussed in positive terms on air.

Roberts took a stern tone with Bush in her interview.

She also generously offered compassion towards him after.

“Do you believe you should have lost your job over this?” she asked.

Bush didn’t squabble over being canned. “Based upon the moment that is on the tape, I understand people’s reaction,” he replied. “I agree. I also felt that way. We live in a visual an digital age so we get that video, this moment. We react emotionally …a flame becomes a bonfire very, very quickly.”

The ex-TV host said he wasn’t close with Trump and isn’t now.

Asked about his part in the incident, Bush said, “I definitely added to the conversation. I was keeping the ball in the air. To me, it was more braggadocio — his word — and performance. If I had ever thought, I’d like to think if there was a grown man sitting in front of me detailing his sexual assault strategy, I would’ve called the FBI.”

It seems Bush never feared the tape would emerge.

“I only talked about it with people who knew prior,” he said, recalling what he had relayed to them: “You wouldn’t believe the things that Trump was saying off camera.” When told that the exchange had been captured on tape, that the mic was still on, he said he thought, “Oh my gosh, wow. I never thought about it again. He wasn’t running for president.” 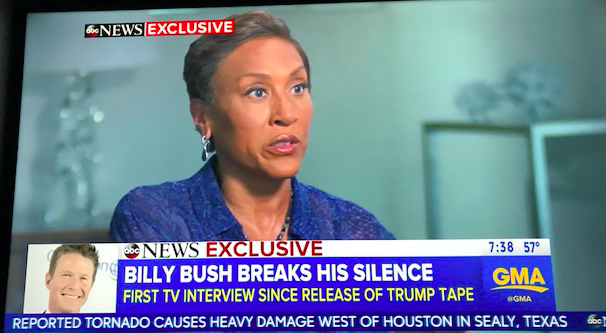 “There are some people who said you’re old enough, you’ve been around enough,” she said, referring to a reporter who was in his early thirties when this happened.

“I should’ve known better absolutely,” Bush said, not skirting her remark. “I look back and I wish…I didn’t have the strength of character at the time.”

He replied, “No one reacted more gutturally than me.”

Bush, who began his apology tour over the weekend with The Hollywood Reporter, said, “I am only ready to get back to work now because there is purpose and there clarity …and a changed person. I do feel like a better man, a better father, friend, person and I do feel better at my job than I ever was.”

“I think I sacrificed my own dignity in that moment. I was very pleased to say goodbye to that guy.”

After the interview, Roberts sat around with co-hosts Michael Strahan and George Stephanopoulos to debrief.

She said she was hesitant to do the interview because she knew many people felt it was going to be critical of the president. “That was not the intent,” she explained. “He [Bush] wanted to be able to explain his actions. He made no excuses. He wanted to explain who he was then and who he is now. He loves his job — he wants to get back in TV, he makes no bones about that. But he wants to do purposeful, meaningful reporting.”

She spoke of a moment first reported by The Hollywood Reporter in which Bush attended a Tony Robbins seminar. Robbins, a big-toothed life coach on steroids, turned to Bush at one point and poignantly declared, “One bad moment does not define who you are.”

“I got chills just thinking about it,” Roberts admitted. “Everybody’s made a mistake. And what do you learn from that and what do you share?”

Strahan thinks Bush is being real. “I gotta say, he’s very sincere in what he said there,” he said.

Roberts agreed. “There is a genuineness there.”

Stephanopoulos, who previously worked for a boss — President Bill Clinton — who had dalliances with a variety of women and lied about a lot of it — sounded less wowed.

“There’s a lot in there,” he said in his whispery feather of a voice.