So Memorial Day Weekend is here, and for most of us that means hanging out with friends and family, throwing some burgers on the grill, and drinking some beers while watching Kelly’s Heroes and the Dirty Dozen. But, without getting preachy, we should all take a minute to reflect on what this weekend is all about: honoring those brave soldiers who lost their lives in defense of this country. Now there are countless men and woman who deserve to be singled out for their valor, but with the 75th anniversary of the Battle of Midway just around the corner, I thought it would be appropriate to call your attention to one of the bravest men who ever lived. A man who, knowing he was facing certain death, led the first attack against the Japanese aircraft carriers and played a direct role in what would be a decisive victory for the United States, and a defeat from which Japan would never recover. That man was Lt. Commander John C. Waldron.

Now for those who don’t know, the Battle of Midway was the turning point in the Pacific theater. The Japanese had an elaborate plan that involved attacking the U.S. base on Midway Island in order to lure the Americans into a battle which the Japanese High command felt their experience and tactics would overwhelm and annihilate the American fleet. With no significant U.S. naval presence, Hawaii and the entire West Coast would be at risk of invasion. But the Americans broke the Japanese code and set a trap of their own – hoping to destroy their enemy’s carriers and thereby establish U.S. dominance in the Pacific. And that was exactly what happened : The U.S. fleet surprised the Japanese, sank their four carriers, and took the first real step to winning the Second World War. 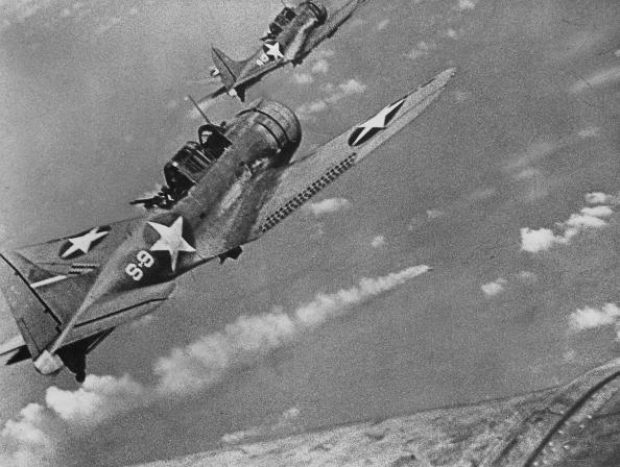 John Waldron was 42 years old when the USS Hornet steamed towards Midway on June 1st, 1942. Born and raised on a reservation in South Dakota, he had never seen the ocean until he attended the Naval Academy. It wasn’t long after he graduated that he moved into naval aviation. He had been assigned to be the squadron leader of the Hornet’s torpedo bombers in late 1941 and had been drilling his men tirelessly ever since. Waldron had the reputation of a tough as nails, no-nonsense commander. Not surprising, since Waldron was a direct descendant of the warriors from the Oglala Lakota tribe – part of the Great Sioux Nation. The tough skin he developed came from decades of derision from his peers over his meager beginnings, and from the racism directed at his Native American heritage. Waldron didn’t care what anyone thought of him – all he wanted to do was fight for his country. He was a natural leader and his men would follow him into the gates of Hell, which, as fate would have it, is exactly what they would do in the upcoming battle.

On the morning of June 4th, the Americans were ready to spring their trap, but in the preflight briefing aboard the Hornet there was a problem. Stanhope Ring, who was in command of the carrier’s air group, directed his pilots to head northwest of the last reported position of the Japanese fleet. Waldron disagreed with this decision, feeling that they should head in the exact direction of that last sighting. He wasn’t shy about expressing this opinion, much the displeasure of Ring. Waldron continued to lobby his superior officer several times after the briefing ended, but to no avail.

The air strike force took off from the deck of the Hornet – fighters, dive bombers, and the 15 planes in Waldron’s torpedo squadron. This force would be joined in the air by similar strike forces from the other U.S. carriers – the Yorktown and the Enterprise. Shortly after the Hornet’s air group was airborne, Waldron couldn’t contain his anger anymore. He broke radio silence to tell Ring that they were headed in the wrong direction. He repeated that comment and Ring issued a terse reply that he was in charge of this group and to stay the hell off the radio. Waldron waited a couple of minutes before replying “The hell with you” and peeled his squadron off and headed due west, where he felt the Japanese fleet was.

Less than an hour later, Waldron was proved right. He had led his squadron on a direct line to the enemy. Waldron broke radio silence again to signal to Ring that he had found the fleet, but Ring and the rest of the Hornet’s planes were too far away to hear. So now, Waldron was faced with a brutal decision. If he went in to attack, he would do so without any fighter protection, and they’d be totally at the mercy of the Japanese fighters. To make matters worse, the U.S. planes (Douglas Devastators) were hopelessly outdated aircraft – their top speed was about a third of what the Japanese fighters could do. They had hoped to get the newer Grumman Avengers, but the Hornet had left Pearl Harbor before they had arrived from the mainland. All of this meant that Waldron and Torpedo 8 were looking at a suicidal attack run. In the intensive training leading up to this battle, Waldron tried to prepare his men for every possible contingency, so that no matter what went wrong in the attack, they would still be able to get the job done. Now he was looking square at the worst possible scenario. Waldron got on the radio again and told his men “We will go in. We won’t turn back. Former strategy cannot be used. We will attack. Good luck!”

And with that, the planes of Torpedo 8 closed up their formation and bore down on the Japanese fleet, some seven miles distant.

The Japanese fighters quickly pounced on the Americans, who were going in low and slow – the only way torpedo bombers can attack. One by one the planes from Torpedo 8 were shot down. Waldron, who inadvertently left his radio on during the attack run, could be heard exhorting his men when he saw a couple of Japanese fighters go down. But shortly thereafter, his plane was hit. Ensign George Gay, one of the other pilots in the squadron, looked over and saw Waldron’s engine on fire. His last sight of his CO was of him trying to get out of the cockpit – one leg out on the right wing of his doomed plane. But then it plunged into the Pacific and John Waldron was gone. George Gay looked around and saw that he was the only one left from his squadron. With his gunner dead, Gay pressed home the attack. Miraculously he survived long enough to get in position to drop his torpedo (he later said that his plane was so shot up that he wasn’t really sure if he was actually able to release the torpedo) and he roared right over the deck of the carrier he was attacking, so close he could see the faces of the crew of the guns firing at him. His plane couldn’t take any more and after getting past the carrier, it too was shot down. Every single plane in Torpedo 8 was destroyed and not one torpedo hit a Japanese ship. George Gay escaped from his sinking plane and was left floating in the Pacific surrounded by the enemy. He would be the sole survivor from Torpedo 8. 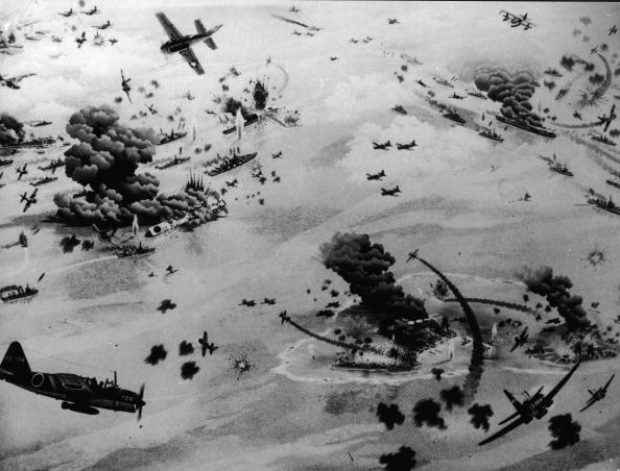 An artist’s impression of the Battle of Midway, during World War II, June 1942. (Photo by Hulton Archive/Getty Images)

History might have viewed Waldron’s attack as more insane than brave, and utterly pointless….except for what happened next. Shortly after his failed attack, the torpedo squadron from the Enterprise attacked the fleet – and right after that the torpedo squadron from the Yorktown. Both of those squadrons had devastating casualties as well (10 of 14 planes lost and 10 of 12 respectively) without inflicting any damage on any Japanese ship. But these three attacks in succession drew the Japanese fighter cover down so low, that it left their carriers exposed to dive bomber attacks. It also burned up a lot of fuel for the fighters, who now needed to land before they could continue their defense of the fleet. The attacks also forced the Japanese carriers into defensive maneuvers, so they were unable to land any planes or launch any for a strike on the American carriers. As the Japanese were trying to compose themselves after the three fierce but harmless attacks, the American dive bombers from the Enterprise and Yorktown arrived and quickly struck. Within minutes, three of the Japanese carriers were in flames – the heart of the Imperial Navy had been gutted.

The other planes from the Hornet never found the Japanese ships. Ring kept his planes flying in that northwesterly direction until they were too low on fuel to keep going. They returned to the Hornet with their full payload of bombs. If Stanhope Ring had seen the sense to agree with Waldron and joined in the attack, they might have sunk the fourth Japanese carrier – the Hiryu. The Americans eventually did sink her, but not before she launched an attack that led to the sinking of the Yorktown. George Gay was picked up by a PBY after spending over 30 hours floating in the ocean – but that had given him a front row seat for the destruction of the Japanese fleet.

Now, there were a lot of heroes that day – some who lived and some who died, but the valor that John Waldron displayed in defying orders he knew were wrong and then attacking the enemy when he knew it meant certain death, place him on a special level. His actions directly helped the Americans win this crucial battle, which turned the tide of the war in the favor of the United States. He got the Navy Cross for his actions that day, but it seems astonishing to me that he wasn’t awarded the Medal of Honor – he is definitely worthy of it. So, I would just ask of you that during this Memorial Day weekend, take a pause to give thanks to all of our fallen heroes and then raise an extra glass in honor of John C. Waldron: the kid from the reservation in South Dakota who’s shining heroism led the way to victory that day in the Pacific. Job well done, Rest in Peace, John.