“Why doesn’t Jared Kushner hold a news conference? Is there some law that says he never has to speak in public or give an interview?”

“@wmata R2 bus that just arrived at Fort Totten was vibrating so hard it made me nauseous. The girl sitting in front of me actually vomited.” — Rohan Edmonson, occasional Washington blogger.

Evergreen tweet about The Bachelorette in the era of President Trump

“Just realized Bachelorette twitter comes back tonight. It normally annoys me, but right now feels like a relic of a simpler, happier time.” — Steph Haberman, LaddersHQ, previously at NBC News, Vocativ and Mashable.

From the vicious rumor mill… 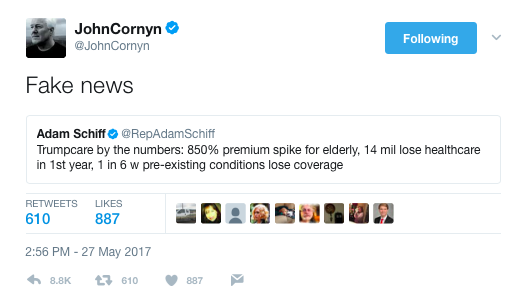 “Leave Tiger Woods alone. All he did was fall asleep in his car.” — Anonymous.

The Boston Globe writes about women urinating at the theater. Read here.