As President Trump comes home from his whirlwind trip abroad, the network isn’t mincing its collective feeling about him. Which is to say they’re not big fans.

CNN’s Chief Political Analyst Gloria Borger, who wrote the piece, reported through an anonymous source that he has gained weight.

“He now lives within himself, which is a dangerous place for Donald Trump to be,” says someone who speaks with the President. “I see him emotionally withdrawing. He’s gained weight. He doesn’t have anybody whom he trusts.”

As a political reporter joked to The Mirror, “Does that count as fat shaming?”

Speaking of fat, or phat as the case may be, Borger reported that Trump offered New Jersey Gov. Chris Christie the vacant FBI Director gig. Christie “demurred,” she wrote, calling it a non-job offer since he allegedly asked it like this: “So you don’t want the job right?” 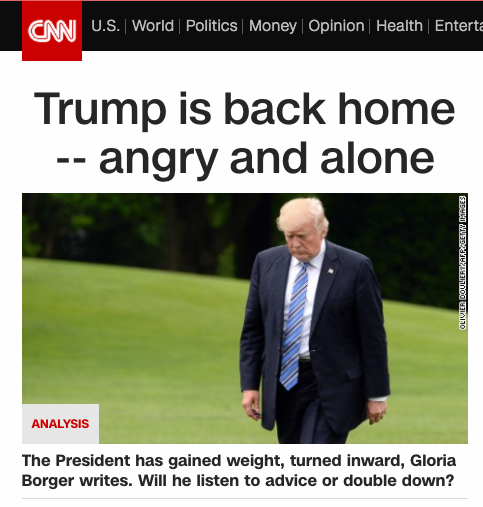