President Trump on Tuesday retweeted a news article based on one anonymous source who disputes other reporting that Jared Kushner sought to establish a secret communications line with the Kremlin.

Such a retweet would normally be insignificant, but it follows just days after Trump blasted news reports based on anonymous sourcing as possibly being fabricated.

On Saturday, just after returning from his first presidential trip overseas, the Republican asserted that articles which include “sources say” are often based on non-existent sources. In another tweet, he alleged that stories based on leaks from the White House “are fabricated lies made up by the #FakeNews media.”

The piece was based on one anonymous source who claimed that the Russians, and not Kushner, broached the idea of the secret backchannel during the meeting, which was held at Trump Tower and was attended by Russia’s ambassador and retired Lt. Gen. Michael Flynn. 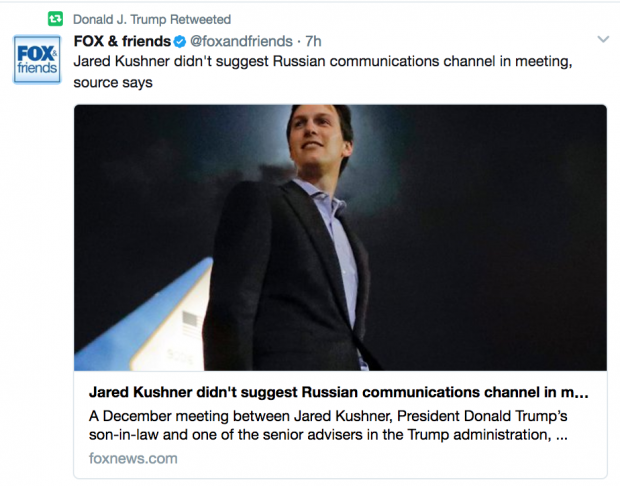 The Washington Post reported on Friday that the U.S. intelligence community intercepted communications in which the Russians were discussing the meeting.

Notably, the White House itself has not denied that Kushner sought to establish the backchannel.

National Security Adviser H.R. McMaster and Trump’s chief economic adviser, Gary Cohn, were asked about the Post story on Saturday but declined to comment. McMaster said that the U.S. government has established backchannels with foreign governments in the past.