Hillary Clinton said President Trump is undermining the very values of democracy and threatening America’s position in the world.

“I do think what he’s doing is very dangerous to our position in the world, our leadership and the stability of the world,” Clinton said at Recode’s Code Conference 2017 Wednesday. “When you give a blank check to the Russians and the Saudis, and others who are engaged in authoritarian and dictatorial regimes, you are sending a message — ‘We don’t care what you do.'” That message will be heard.” 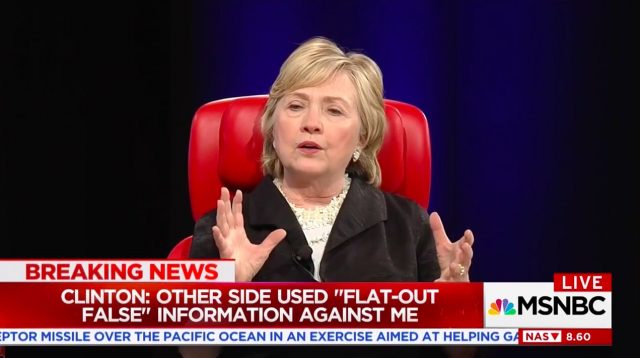 “Now we weren’t always able to control what others did, but we sure made it clear we didn’t think it was a good idea to engage in invasions and mass murders and other things we see from Philippines to the Middle East,” she added.

“When you turn on your allies and treat them with such disdain and contempt, our democratic NATO allies who have stood with us, who came to our aid after 9/11, you are sending a message that you don’t care about history or even about the current problems that we face.”

“The only comfort I can get out of having lost in the way I did, and having the Russians play such a role, is that [French President Emmanuel] Macron was ready and able to rebut that. He said, ‘I’m the Hillary Clinton of this election.’ They had institutions and media protection that we don’t have. He was smart in how he dealt with it.”

“I think that is important,” she continued. “We need to reform democracies. We need to reform economies. We cannot stand idly by and allow Trump to continue to undermine the very strong foundation, based on values, that we in democracies share. Politicians come and go, but these values and the role they played in stabilizing the world after the worst war in humanity is critically important.”