Michael Moore and other celebrities freaked out Thursday after President Donald Trump announced that the U.S. was pulling out of the Paris climate accord. 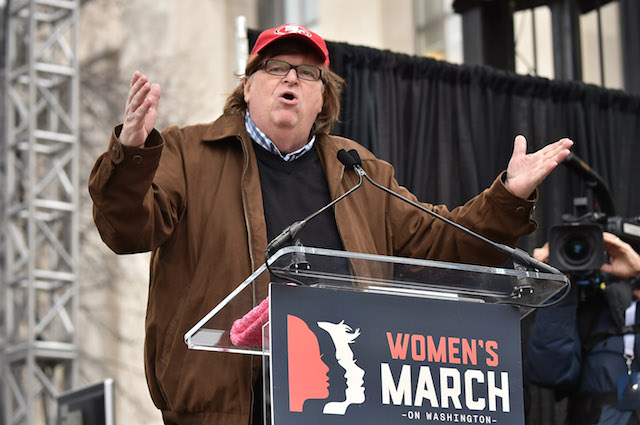 “Trump just committed a crime against humanity,” the 63-year-old filmmaker tweeted Thursday. “This admitted predator has now expanded his predatory acts to the entire planet. #ParisAccord.”

Trump just committed a crime against humanity. This admitted predator has now expanded his predatory acts to the entire planet. #ParisAccord

Moore then accused Trump of putting the Earth last, before claiming he lived in a rogue state.

“My name is Michael Moore. I am an American. And I live in a Rogue State. #ParisAccord,” he continued.

My name is Michael Moore. I am an American. And I live in a Rogue State. #ParisAccord

There has never in US history been such a destructive megalomaniac in the WH. Thank you to US press and other numbskulls who put him there.

Short-sighted #DonaldTrump quits Climate Accords. Think of all the time effort & money poured into this & he bails giving BigOil a windfall.

Don’t agree with President Trump’s decision re #ParisAccord but sounds to me like he’s just trying to cut a better deal.

Trump is having the U.S. pull out of the Paris Climate Accord. Too bad someone didn’t tell his father that he shoulda pulled out, too.

There are only two other countries not in the Paris Climate Accord – Nicaragua and Syria.

1) If Dems are smart, they should call for immediate meetings w POTUS to determine how to get back in the Paris Agreement

I’m guessing that Donald Trump doesn’t see the irony in making his announcement to leave the Paris Agreement while standing in a garden.

We have to stop this asshole. This is urgent. You have to vote in 2018.

Trump is our national embarrassment.

Shame on you @realDonaldTrump as people lose their lives, homes and economic opportunities to your childish refusal to honor #ParisAgreement

However, not all celebrities were upset by the move and some praised Trump.

Judging by the reactions of leftist Democrats, pulling out of the #ParisAgreement might be the greatest thing that has happened in history.

Update: This story has been updated with additional celebrity comments from both the left and the right.