Activist Linda Sarsour has raised more than $80,000 for a Somali woman who claims she was attacked by a white man in a hate crime, but there’s much more to the story, the two people accused of the hate attack tell The Daily Caller.

Sarsour started the fundraiser for Rahma Warsame, a 40-year-old single mother who lives in Columbus, Ohio, who says she was attacked on Saturday night by a white man while defending a friend.

Sarsour, a leader in the pro-Palestine cause who has come under fire for her sympathetic views on sharia law, posted a picture of Warsame in the hospital and said that she has four missing teeth, a swollen face, swollen nose and busted lip.

We must unite against hate. Please support Rahma who was brutally beaten in an alleged hate crime in Columbus, OH. https://t.co/cQ5tnkz5t9 pic.twitter.com/A49Ya1VuUR

In her fundraising pitch for Warsame, Sarsour says that Warsame will miss work due to her injuries and needs money to provide for her 12-year-old son. The goal for the fundraiser has been increased several times since it was posted on Sunday. The goal is now $100,000.

The Columbus chapter of the Council on American-Islamic Relations (CAIR) has also gotten involved in the case and is calling on police to pursue a hate crime investigation. The group compared the case to an incident in which a white man killed two people who were defending a Muslim woman on a train ride in Portland last month. (RELATED: Linda Sarsour Dismisses Female Genital Mutilation Question Because White Man Asked It)

According to CAIR, Warsame claimed that the white man told her “you all will be shipped back to Africa.” The group held a press conference on Sunday to complain that the man involved in the incident was not arrested.

But Samantha Morales says that the Sarsour and CAIR have the story all wrong, including the allegations that racial epithets were hurled at Warsame.

Morales, 31 and of Mexican heritage, says that she was attacked first by a mob of men and women, including Warsame, following a neighborhood argument involving a woman and her son.

“What happened is not what she is claiming. The woman that is in the hospital, I feel sorry for her, but she is one of the women who was kicking and hitting me after I got tased,” Morales told TheDC in a phone interview on Monday.

Morales, who works as an insurance claims agent, says that her boyfriend, Ricky Boyce, is the man alleged by Sarsour and CAIR to be the white man who hurled racial insults at Warsame.

But both Morales and Boyce say that he uttered no racial pejoratives in Saturday’s incident, which they say began after Morales intervened while a woman of African heritage who lives in her apartment complex was yelling at and hitting her son with a shoe.

“I didn’t even have time to talk to any of them because they were over there jumping [Morales] at the time,” Boyce told TheDC, denying that he made racial remarks during the incident.

Morales says that Sarsour and CAIR have ignored another major piece of the story: Morales herself was transported to the emergency room by ambulance because of the injuries she sustained in Saturday’s melee.

“They’re not even mentioning that I was the victim. They came at me. The woman that’s in the hospital is part of the group that was aggressing me,” Morales said.

A copy of emergency room discharge papers that Morales provided to TheDC show that she underwent a CT scan and X-rays on her hand and ankle at a Columbus hospital. She claims that she sustained a concussion during the attack. 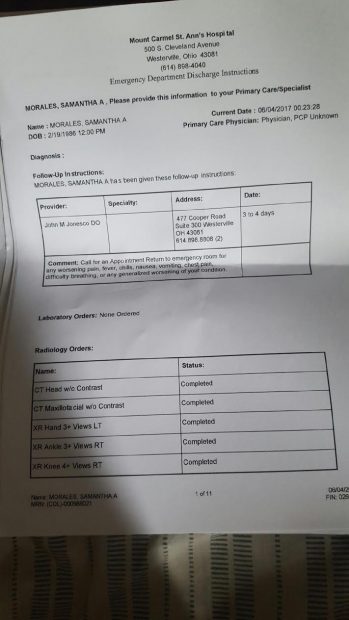 Morales said that the saga began after she yelled from her porch at a woman who was screaming at her child and hitting him with a shoe in a common area behind her apartment.

“I went outside. I wasn’t trying to get involved. I just thought the presence of an adult would have stopped her,” Morales says.

But Morales says the woman — who Morales says she does not know — left for a moment and came back angry and threatened to break the windows on her car and apartment. The woman, who Morales says was carrying a stick, then walked near Morales’ car and accused Morales and Boyce of having taken her child.

Morales says she called 911 and explained what had transpired before the threats.

The standoff escalated to violence soon after, Morales says.

“Four or five different men” assaulted Morales before someone used a taser on her, she claims. Then a group of women joined in the assault, both Morales and Boyce said.

It was after the taser was used that Boyce, who was watching from the apartment, says he sprung into action.

Boyce says he’s sure he hit someone in the scuffle but says he can’t be sure that he struck Warsame. He also strongly denies purposely targeting her.

Morales says that police temporarily detained Boyce but soon let him go. He says that officers realized that he was not an aggressor in the incident.

A police report taken of the incident backs up Morales’ and Boyce’s claims. According to the report, a Muna Warsame had a Taser at the scene of the incident.

The report also states that “due to conflicting statements,” the “primary aggressor was not able to be identified.”

The report also notes that Morales called 911 again on Sunday morning after men and women involved in the events the night before threatened her outside of her apartment.

But in a press release and a press conference held on Sunday, CAIR officials insisted that Columbus police have not thoroughly investigating the case.

“The fact that the perpetrator was not taken into custody and was not charged raises serious concerns and sends a very dangerous message,” Jennifer Nimer, the executive director of CAIR-Columbus and an attorney for Warame, said in a statement. (RELATED: Linda Sarsour Poses For Photo With Ex-Hamas Operative, Has Family Ties To Terror Group)

Nimer did not return a voice mail seeking comment about the information provided by Morales and Boyce.

A group called MY Project USA had planned a rally for Warsame at the state capitol building in Columbus was on Monday, but it was canceled for reasons that are unclear.

For her part, the New York City-based Sarsour has issued several tweets about the Columbus incident. It is unclear if she has talked to Warsame or CAIR or if she is conducting her online fundraiser separately.