One of the three terrorists behind Saturday’s deadly attack in London reportedly featured in a 2016 documentary about Islamist extremists in the United Kingdom.

Channel 4 documentary “The Jihadis Next Door” follows a group of radicals as they preach for an Islamist revolution in the U.K. The jihadis hold rallies in central London where they vow to make sure the Islamic State flag “will one day fly high over 10 Downing Street,” the prime minister’s residence.

A 27-year-old man known as “Abz” has been identified as one of the terrorists behind the attack in London. He can be seen publicly praying to an Islamist flag in broad daylight in the documentary, according to The Sun. 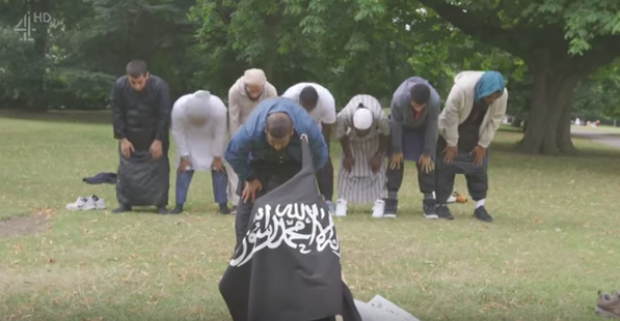 Police failed to act on at least two reports of Abz’s extremist views. A former friend told BBC that he contacted police about comments the suspect made about previous attacks. (RELATED: London terrorist ‘Brainwashed’ British Children In The Park)

“We spoke about a particular attack that happened and like most radicals he had a justification for anything and everything and that day I  realized I needed to contact the authorities,” the unnamed former friend told BBC. “I did my bit. I know a lot of other people did their bit, but the authorities did not do their bit.”

“He used to listen to a lot of Musa Jibril,” the source told BBC. “I have heard some of this stuff, and it’s very radical. I am surprised this stuff is still on YouTube and is easily accessible. I phoned the anti-terror hotline. I spoke to the gentleman. I told him about our conversation and why I think he was radicalized.”

Erica Gasparri, a neighbor of the suspect, claims she reported him to authorities two years ago after he began “brainwashing” her children. She confronted him when her children came home and told her they wanted “to become a Muslim.”

“He was trying to radicalize the children, he would go down to the park and talk to them about Islam,” Gasparri said, according to The Telegraph. “He also came to the houses and gave the kids money and sweets during Ramadan.”