The small hive of 20,000 honey bees is part of a push to bring attention to the importance of pollinators and beekeepers’ struggle to keep their hives alive over the past few years.

“All types of pollinators, such as bees, butterflies, birds and bats, are critical to providing our nation’s food, fiber, fuel and medicine,” Pence said. “However, our beekeepers have been losing colonies for many years. This presents a serious challenge to our ability to produce many of the agricultural products that we enjoy today.”

Pence installed a hive at the Indiana governor’s residence in 2014, after her husband Mike Pence was elected governor of the state. 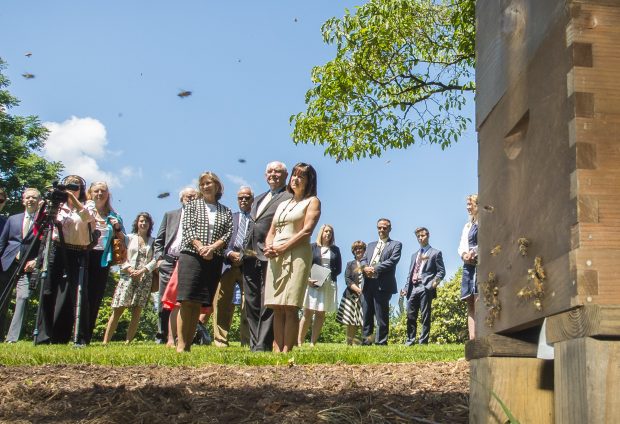 Experts are at a loss to pinpoint the exact cause of the sudden decline in bee populations known as colony collapse disorder, but have attributed it a combination of parasites and pests, transportation of bees, exposure to pesticides, and poor nutrition.

Beekeepers started worrying about their bees mysteriously dying or disappearing more than 10 years ago. Some beekeepers reported that 90 percent of their colonies died in 2006, due in part to malicious fungi and parasitic mites. In its first comprehensive report on bee populations, the USDA said the total bee population declined 17 percent between January 2015 and January 2016.

Agriculture Secretary Sonny Perdue, who spoke at the unveiling of the hive, said it the Department of Agriculture is “leading the way in research to help out our pollinator friends.”

Perdue declared the week of June 19 National Pollinator Week to recognize the importance of honey bee health. “Most farmers and consumers have no better friends and few harder workers than the honey bee, as more than one-third of all U.S. crop production requires insect pollination,” Perdue said Tuesday.

“But our honeybee population has been losing ground at an alarming rate. The problem represents a diverse mix of challenges requiring a wide range of solutions.”

1
'It Was Called Communism, And It Just Didn't Work': Bloomberg And Sanders Spar Over Taxes And Wealth
Politics
2
'Another Slap In The Face': Media Melts Down After Trump Picks Grenell As Acting DNI
Media
3
Bloomberg Says In Ad He Led NYC Through 9/11. He Became Mayor Months After The Attacks
Politics
4
Pigeons Wearing MAGA Hats Released In Las Vegas
Politics
5
Bloomberg Booed After Refusing To Release Women From NDAs
Politics