The White House has repeatedly declined to say whether Donald Trump has confidence in his attorney general Jeff Sessions, creating skepticism about his future here in Washington.

It began when the president publicly blamed the Sessions-run Justice Department Monday for the “watered down, politically correct version” of his executive order that restricted immigration from certain countries and was later blocked by a federal court — even though Trump himself signed it.

“The Justice Dept. should have stayed with the original Travel Ban, not the watered down, politically correct version they submitted to S.C.,” he tweeted.

The Justice Dept. should have stayed with the original Travel Ban, not the watered down, politically correct version they submitted to S.C.

The Justice Dept. should ask for an expedited hearing of the watered down Travel Ban before the Supreme Court – & seek much tougher version! 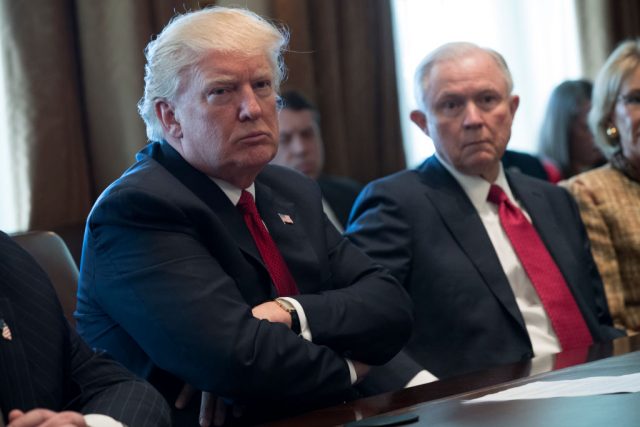 The New York Times reported that Trump’s relationship with Sessions had grown tense after he recused himself from the investigation into Russian meddling in the election, because Trump believes that was why a special counsel was later appointed to oversee the investigation. ABC News added Tuesday night that both men had grown so frustrated with each other that Sessions even offered to resign recently.

When Spicer was asked last week if Trump had confidence in his son-in-law Jared Kushner, he quickly answered, “Absolutely.”

Trump ignored shouted questions about Sessions as he boarded Marine One on the South Lawn at the White House Wednesday.

Sessions, who gave up his Senate seat in Alabama to take the Justice Department role, has remained silent amid the growing reports, except for a statement he issued praising Trump’s nomination for director of the FBI, Chris Wray.

A spokesperson for the Department of Justice declined to comment, as did the White House.