No one got body slammed. But the mood quickly turned prickly inside the media throng outside the Senate Intelligence Committee Wednesday morning when police and media handlers bitched out journalists and camera people at every possible turn.

“Are you press? You can’t stand here,” said one of the many Capitol Hill cops who spent much of the hearing nonsensically ordering reporters to stand here, there and nowhere.

The throng of journalists and cameramen and broadcasters waited en masse outside the committee in the sleek and modern Hart Senate Office Building, where ex-FBI Director James Comey was grilled for hours about President Trump‘s propensity to lie.

In one instance after another, when a journalist would stand precisely where the police had instructed, an officer would follow up by saying, “You have to move.” A common refrain throughout the day: “If you’re going to stand here you better be taking pictures.”

A nasty point of contention involved a strip of coveted, carpeted landscape leading from the podium with mics to the main pool camera.

“I thought I was going to have to videotape a fight,” a cameraman remarked after watching a tense exchange between employees from two networks. One was the pool guy, so he pretty much had complete control. The others had parked their equipment in the path of the pool camera that would later capture lawmakers speaking to the media after the hearing.

“Don’t try to bullshit me, man,” a cameraman said to the offending network employees.

When others sympathized, he turned jokey. “I got high blood pressure, I get emotional,” he said. “I took my pill this morning, so don’t worry about it.”

At this point an ABC cameraman was literally sweating. 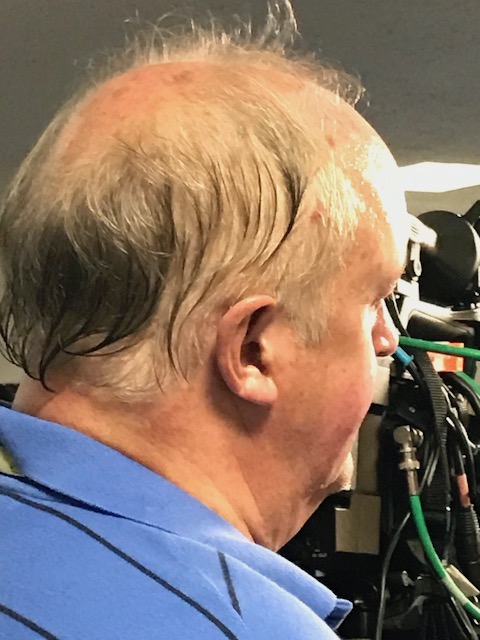 This is where I was. Anytime someone put so much as a big toe in this pathway, there was a total freakout. 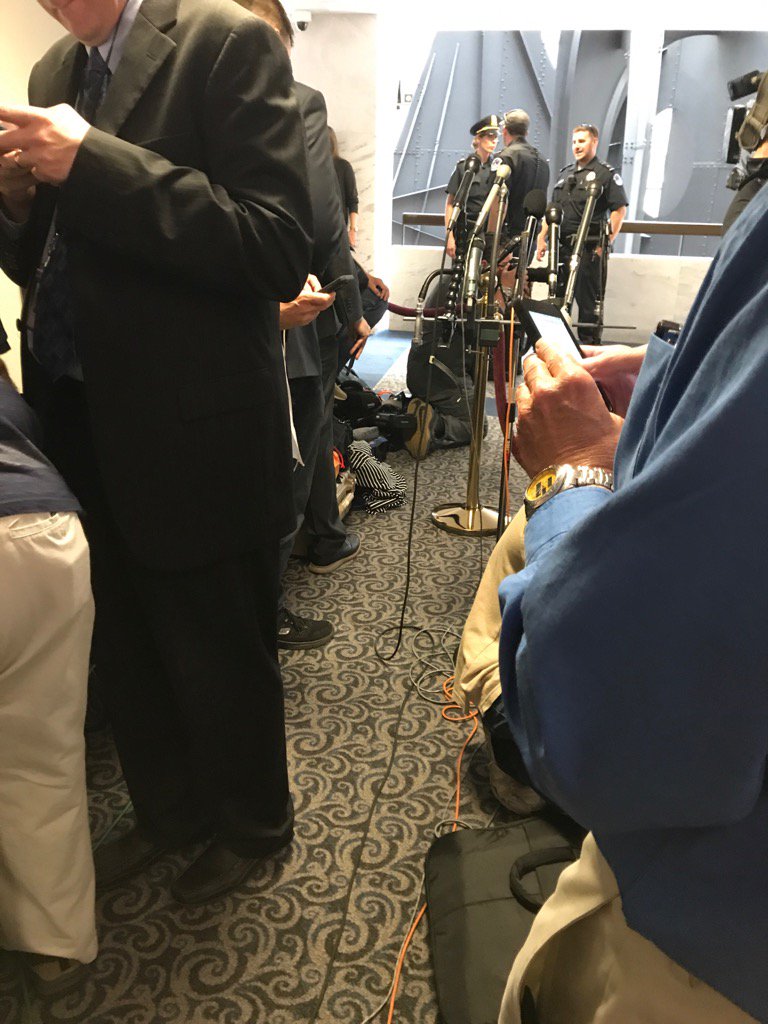 “Is there anyone in this shot?” he asked. “Who’s the worst offender?”

Before the day barely got started, he was irritatingly making pointless demands of a small gaggle of journalists standing on a tiny piece of real estate outside a red velvet rope. They were not in the way or bothering anyone.

Still, he insisted that the five or six journalists standing there had to cross the velvet rope and somehow stuff themselves into a few feet of floor space piled with wires and cameras any way you looked.

One of the funnier interviews that occurred in the throng was that of Senate intern Ben Hunt. He was asked about the incredible hardship he endured to attend the hearing. No, he didn’t trudge through sleet and snow on horseback to get here. He arrived before 6 a.m. to stand in line.

Another media handler — this one, bearded — was maybe the second bitchiest. “Everyone needs to go behind the ropes or somewhere else,” he demanded.

Just before a few lawmakers and ultimately Comey emerged from the hearing, a female zookeeper wasn’t necessarily bitchy. But she was insistent and detailed in her instructions for the press.

Mark Abraham, a jovial employee from the Senate Press Photographer’s Gallery, barked into the crowd of journos, “Real credentials only. Not the kind you can buy in the store.” Some members of the media snickered with laughter in response.

Even Comey bitched about the media. When asked why he leaked the content of his memos of meeting with Trump through a close friend instead of going straight to the media himself, he had his reasons.

He said he hoped the leak would prompt the appointment of a special counsel.

The media was camped outside his home.

He said he thought delivering the memo himself would be “like feeding seagulls at the beach.”

See a gallery of photos from the day below:

1. Cameraman takes a lunchtime snooze. 2. A woman with a spectacular hairdo stands before the throng of journalists. Someone in the gaggle asks, “How are you?” She replied, “Fabulous.” The response: “I can tell.” 3. A woman in pink sneakers periodically comes out to alert the press. 4. No time for lunch, but here’s a banana. 5. MSNBC’s Hallie Jackson preps for a live shot. 6. Hallie Jackson take two. 7. CNN’s Manu Raju awaits lawmakers in the throng. Somehow he stood outside the velvet rope without getting attacked by cops or media handlers. 8. Sen. Brad Sherman (D-Calif.) takes q’s from reporters who are ravenous to interview any lawmaker that crosses their path. No offense to Sherman. 9. As the day stretches on, a sound guy and a producer give up and lounge on the carpet. 10. Sen. Marco Rubio (R-Fla.) emerges from the hearing. “Any surprises today senator?” And, “What questions did you have in the closed hearing?” He did not answer the questions. 11. A Spanish-speaking reporter performs her live shot in the lobby of Hart. 12. PUT YOUR HANDS IN THE AIR! Comey comes out and many journos must stretch their arms up to capture the 6’8″ ex-FBI Director. 13. This step ladder is obviously owned by Reuters. Don’t touch! 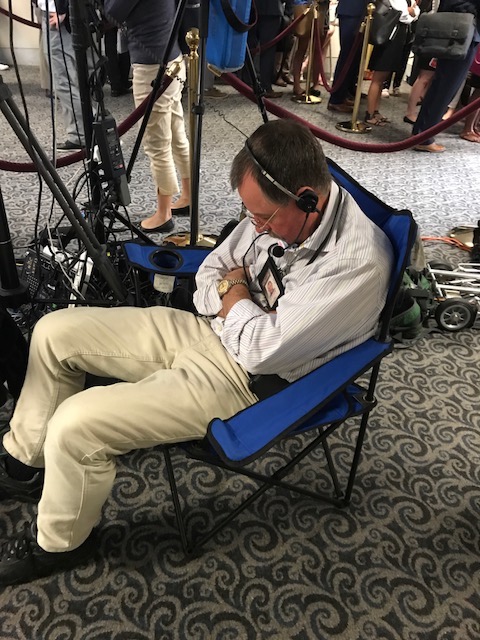 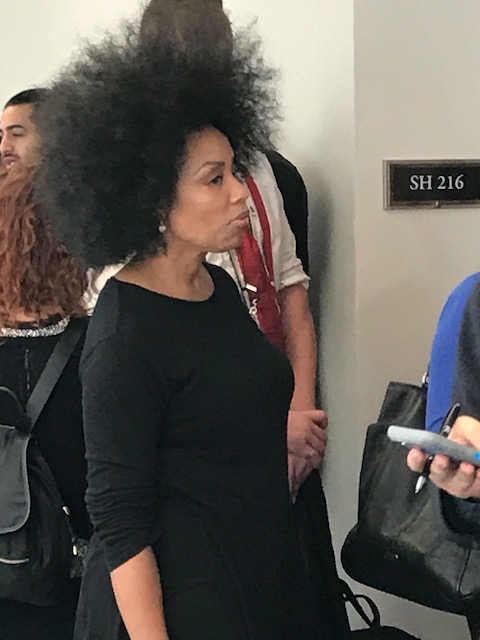 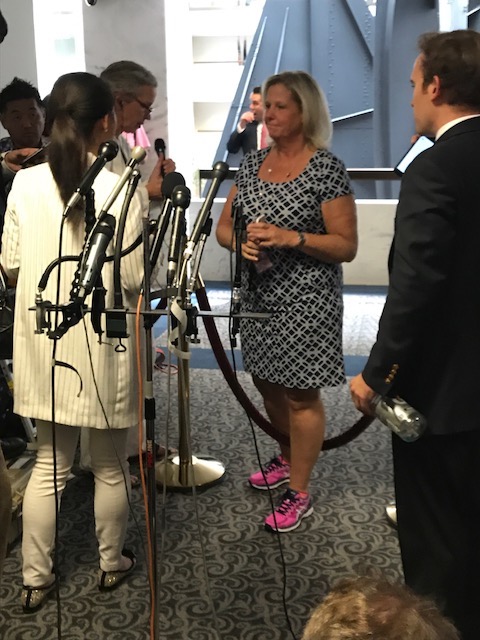 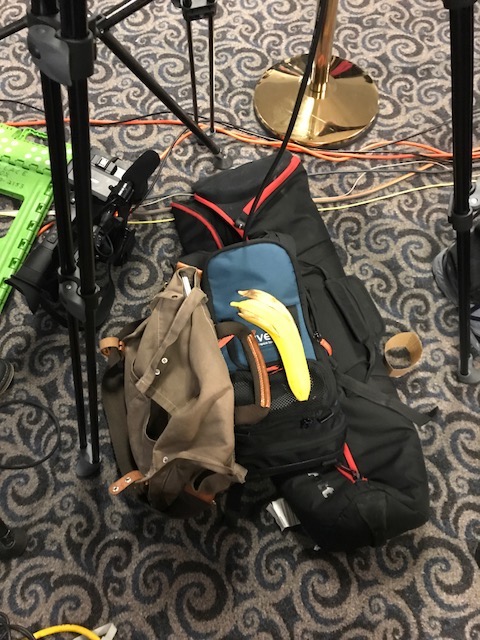 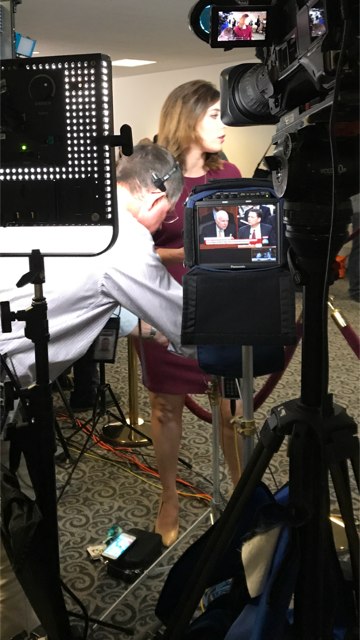 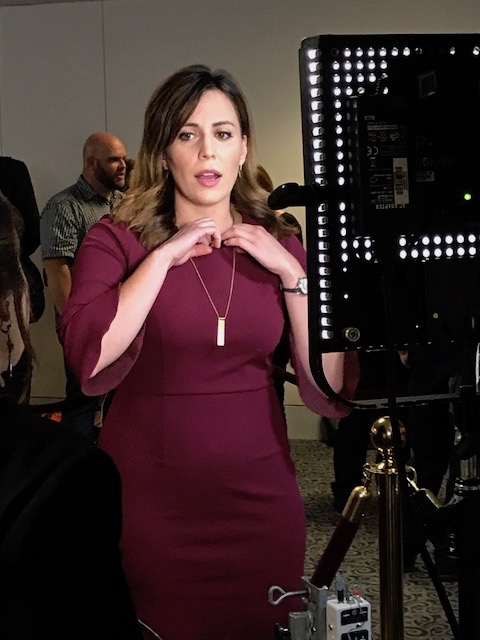 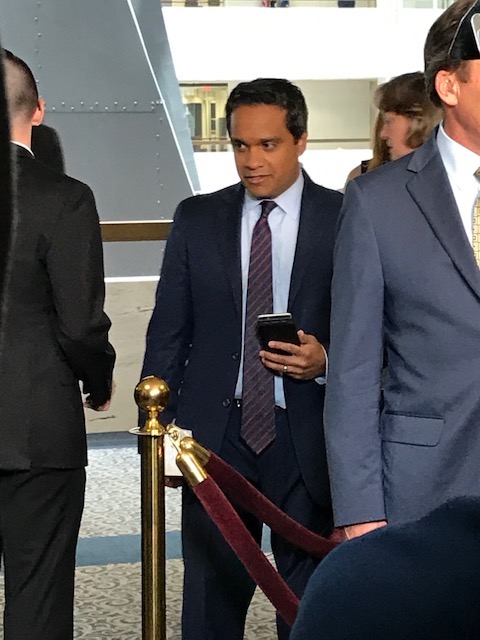 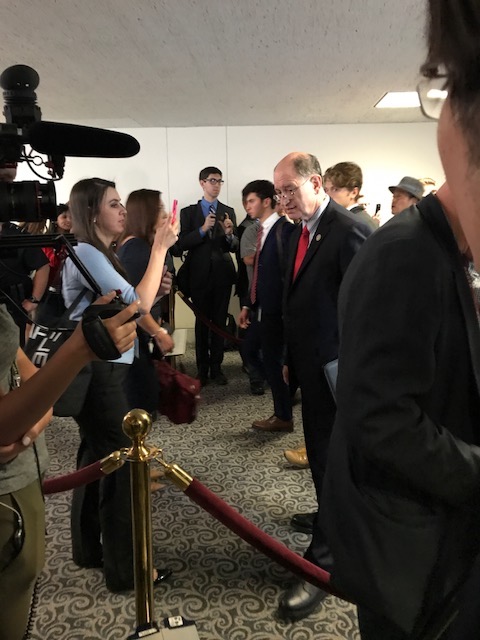 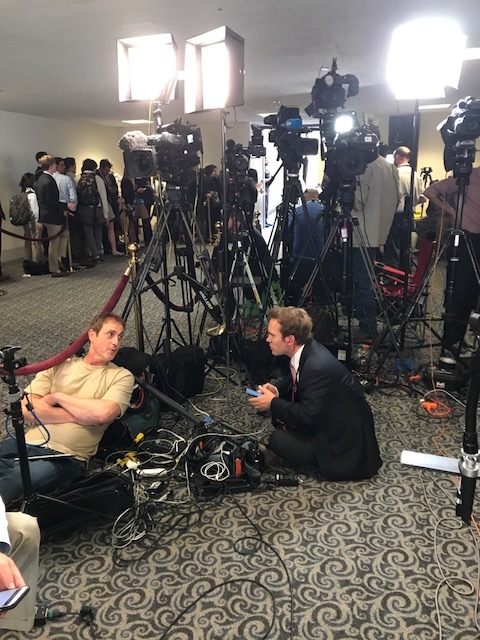 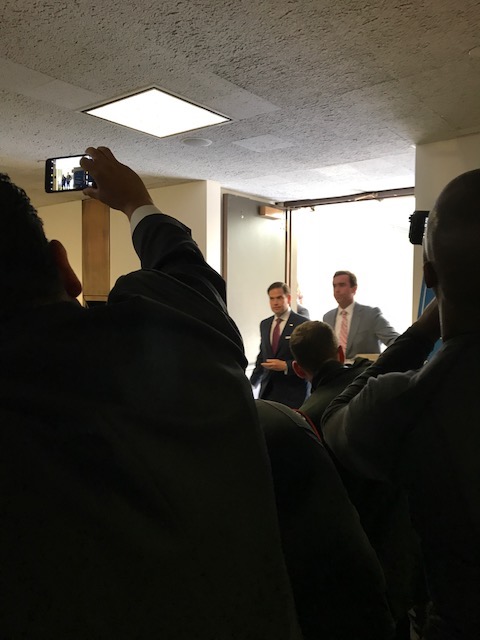 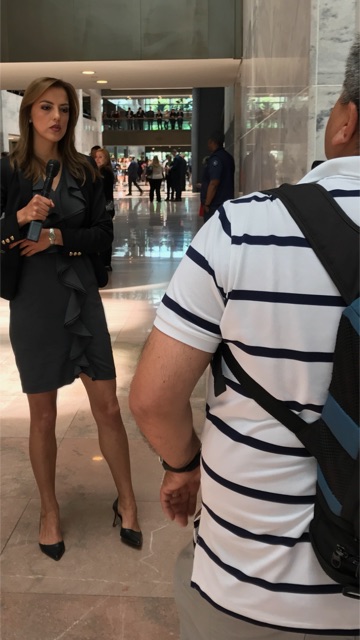 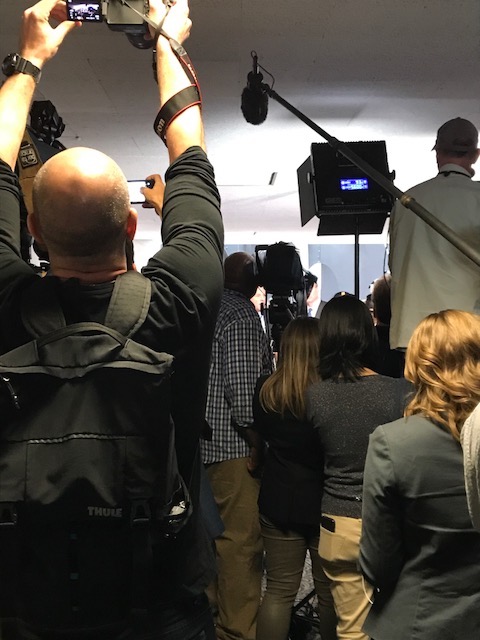 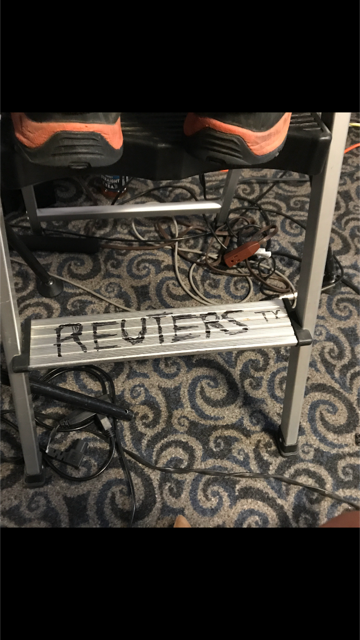