Rep. Debbie Wasserman Schultz and other members of the U.S. House of Representatives are taking a stand on an important issue: They say members of Congress’ private dining room isn’t fancy enough even though a special “surveillance team” has been created to protect them from being served mystery meat.

The Florida Democrat’s insistence on fancier food came at a hearing with House Chief Administrative Officer (CAO) Philip Kiko in which he said the top priority should be stopping cyberattacks on politicians, an issue with which Wasserman Schultz has repeatedly struggled.

The Florida lawmaker said she has “spent a lot of time over the years” trying to improve the quality of food served to members.

“I realize it loses money and isn’t frequented very much. And I don’t think it’s gotten any better since the restructuring. What’s the status of the members’ dining room?” she asked of the ornate eatery during the May hearing.

Kiko replied, “Well, we have spent a considerable amount of effort on the members’ dining room. We have a new chef who’s very good.”

Kiko said “Members bring a lot of constituents in. They — and we — we basically said, look, this is supposed to be a premier service. It’s not supposed to be a middle service. And we’ve been emphasizing that.”

Wasserman Schultz, the former head of the Democratic National Committee (DNC), responded, saying “I have spent a lot of time over the years dealing with the quality and cost of the food in our cafeterias. And I appreciate you going through the efforts that you’ve made to improve it. But the food is still terrible and the prices are still too high.”

In addition to the members’ dining room, she objected to the caliber of the cafeterias used by members and staff.

“I have the pictures with me of some of the barely-able-to-be-described-as-food,” Wasserman Schultz continued. “They would have a lot of nerve, requesting a price increase, unless they improve dramatically what they offer in the cafeterias. How do you examine whether there are adequate, healthy choices and vegetarian options for staff? We have a lot of vegetarians on — among our staff.”

Members “consistently ask about the quality of the food and the service in our cafeterias and the House restaurant. And it’s a perpetual source of frustration, I think,” Ryan said.

Kiko said a “surveillance team” ensures that House members don’t eat mystery meat: “What the CAO’s office did is basically I tasked a whole bunch of people in the procurement office, five people individually, to go around, and we created this quality assurance surveillance team.” 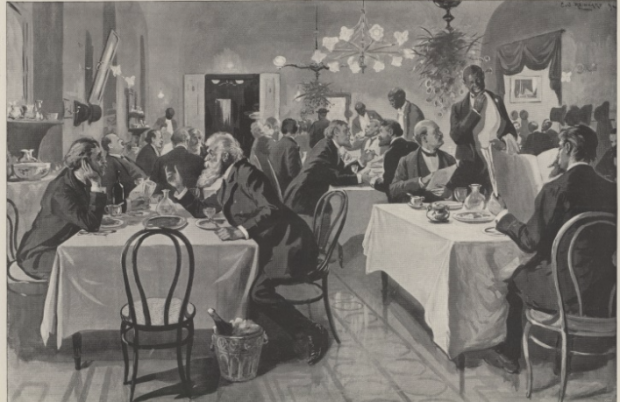 (House members’ dining room in the 1800s. Photo from Collection of the U.S. House of Representatives/Government photo)

The May 17 hearing was to examine the budget for the House’s infrastructure, including buildings and information technology, and according to the top administrator, the most important topic of discussion for the day should have been cybersecurity.

“The fiscal year 2018 budget request for the Chief Administrative Officer is $133 million,” an increase of 14 percent compared to the previous year, Kiko testified. “The first priority highlighted in my testimony — cybersecurity — accounts for 78 percent of the CAO’s requested increase for FY18.

“Cybersecurity is a critical issue of great consequence to the House. Given the increased amount of state-sponsored activity waged against the United States government by malicious actors, there is no question that the House is a target.”

The focus on the quality of the members’ dining room came despite the repeated cyberattacks on government and political entities, including a recent House data security breach allegedly committed by Wasserman Schultz’s longtime technology staffer, Imran Awan, affecting dozens of members.

Imran and four relatives who were placed on House members’ payrolls as IT guys at chief-of-staff-level salaries are the subject of a criminal investigation by the Capitol Police.

The Awans are “accused of stealing equipment from members’ offices without their knowledge and committing serious, potentially illegal, violations on the House IT network,” according to Politico.

Contrary to Kiko’s testimony that “it is imperative that we establish and maintain a robust cybersecurity posture,” Wasserman Schultz has kept Imran on staff despite a House-wide ban on him touching computers. All the other members who employed the relatives fired them after the criminal probe was revealed in February.

In the hearing, Wasserman Schultz also admitted violating House network security policy “for years and years,” and blamed the CAO staff for not stopping her.

The next day, at a hearing on the Capitol Police’s budget, she threatened “consequences” for the police chief if he did not give her a laptop used by Awan, which is being held as evidence in the case–seemingly making it harder to bring criminal charges in a matter that has parallels to the hacking of the DNC during the 2016 elections.