At the expense of incurring the wrath of all the shotgun manufactures I test guns for – this is written in stone – a new gun price depreciates significantly the moment you sign on the dotted line for the sale. Walk out the showroom door with a new smoothbore, try to sell it the next day, the next week or the next month and you are going to see that the new gun is worth considerably less than what you paid for it. This isn’t a completely bad thing for there’s a lot that can be considered rewarding to buying and shooting a new gun.

But there’s also a great deal that can be rewarding to buying a used gun, especially an old English side by side. There are also plenty of pitfalls, though. Avoid those pitfalls and you are going to experience something that’s possibly positive in the monetary sector. Sell that old English gun a year or ten later, after lots of fun using it, and that gun is most likely going to increase in value.

Why? Like real estate, they aren’t making those old guns anymore. Actually, they are but these days a Purdey, Holland and the others that are continuing to be made to this day will cost more than many houses, and certainly more than one of these old English shotguns that is say 100 years old – or older – or slightly younger.

–
These guns are not only well made, but they have withstood the test of time, and, if well cared for such prizes could last for another 100 years. And that’s what’s so appealing about owning and shooting one of these guns – they reek with history – most of which can only be speculated about. But those thoughts add to how much we can enjoy them. Some say a currently machine-made gun has no soul. Maybe such guns will have a soul 100 years from now. Though all currently-made shotguns are machine made, this is not a bad thing, for the handmade shotguns of yesteryear cannot be made to the tight tolerances of today’s CNC machines. So maybe these English guns being totally handmade has something to say for their having a soul – as well as their old age being a factor in this soul thing.

Pick up one of these treasures and you can only contemplate what such a piece has been through, the places in the world it has traveled, the game it has accounted for. This is a probably – the more you spend on an old English double – the more it is going to escalate in value. But the more anyone would invest in such a gun the less it might be used in the field, and I’m suggesting buying an old English double and using it, not relegating it to the gun cabinet for years of so-called safe keeping.

The most expensive of these old guns would be (1) from the top London makers and (2) a sidelock with ejectors. You no doubt already know most of the top names – like Purdey, Holland and Holland, Boss, Churchill, certainly others. As a rule the most expensive English side by sides were made (or at least sold) in London, but many of today’s experts in this field will tell you that the shotguns made in Birmingham were at least sometimes of equal quality, and they tend to be less expensive. So put these facts in the back of your mind when you are considering such a purchase. 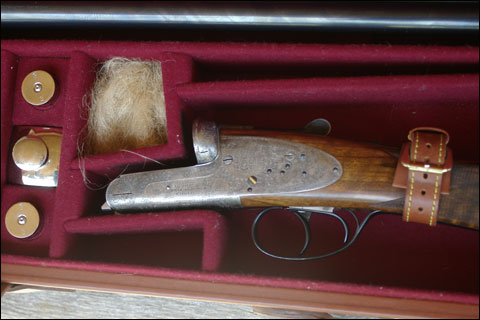 This is a fine old English sidelock in great shape and in the maker’s case.

–
A second thing to consider is whether to buy a sidelock or a boxlock English gun. Most every sidelock that came out of London in the days of yore were real sidelocks, not so-called sideplate guns. Sidelocks provide more room for engraving, and these side panels also contain the gun’s locking system. So the sidelocks can be pulled out by a professional for cleaning and other needed attention. Personally, I like boxlocks, and by most any measure boxlocks are cheaper – cheaper to make and thus cheaper to buy, even a 100 year old boxlock. So – a boxlock made by a Birmingham maker (instead of a London maker – although most of those sold sidelock side by sides) might be worth considering.

A third factor in cost would be whether the gun you are contemplating has ejectors or extractors. Depending upon how you are going to use such a gun – do you really need ejectors? You might – particularly if you want to use the gun on driven shoots – on this side of the Atlantic or abroad – or even maybe on the “flush-type” clay target shoots where you and your partner(s) try to break as many birds as possible – the target throwers sending the clay birds out as quickly as they can – and from multiple traps.

But if you want to use such a gun for waterfowling or upland shooting extractors might suit you just fine and such old doubles tend to be less expensive. You can use the money you saved to bankroll a hunt or two. The word of caution here relates to the fact that not every English boxlock extractor gun was made to the fine attention to detail many others were, nor, maybe, were the finest materials used. So be on the lookout for these. I guess the suggestion here is – if you are buying a boxlock, non-ejector gun – make sure you are well aware of the maker’s reputation. Buy such a gun from a maker like W. C. Scott, Westley Richards, Greener and others and you probably cannot go wrong. 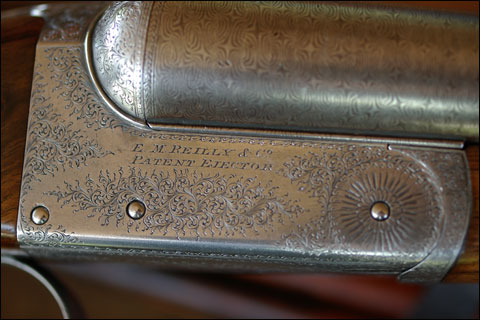 This is a Reilly boxlock ejector, beautifully engraved and with Damascus barrels.

–
What else do you want to be looking for – to avoid pitfalls? Look out for barrels which have been cutoff. The choke will have been eliminated – but that’s not as big a problem as the balance that has been lost. These fine old English guns were made to handle to perfection, and a number of current-day guns fail in this respect. So if a 30-inch-barreled English gun has been lopped off from 30-inches to 27-inches, just as an example, the perfect balance just isn’t going to be retained.

Another close watch should be given to the gun’s rib. Is it detached anywhere? Is there any rust between the barrels and the rib? Is there a tiny hole in the brazing of the rib to the barrels – where water can easily get in? If so this is probably not an inexpensive fix.

You have probably been measured for your length of pull, drop and comb and drop at heel – so your guns shoot to point of aim when properly fitted. When you buy one of these old guns the seller will provide all this stock measurement information to you. If you know the length of pull is too short or if the drop at comb and heel are way off from your personal measurements – just keep on looking for another gun. Restocking could be in order otherwise, and that job could cost more than what you paid for the gun in the first place. 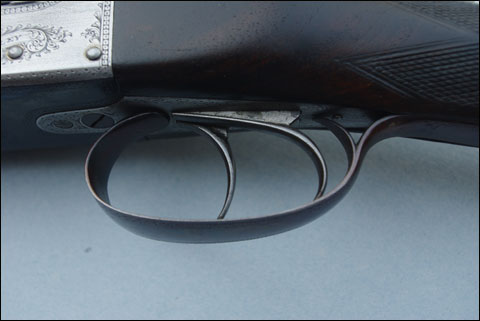 –
If you want to use such a gun for waterfowling look for an English double made for pigeon or waterfowl shooting. These can weigh from 7½ to over 8 pounds. I’d suggest a 12 or even a 10 gauge. The latter will have 2 7/8-inch chambers, not the 3½-inch chambers of modern-day 10 bores. But that’s no problem, for RST Shotshells makes lots of 2 7/8-inch 10 gauge loads. Check www.rstshells.com.

If you are looking for using one of these guns in the uplands there are many choices, especially in 12 gauge. Both 16s and 20s are available, though not as readily, and the 20 bores tend to be more expensive. But there’s no need to fret for there are so many 12 bore game guns offered for sale that weigh from 6¼ to 6¾ pounds, a few even lighter. Most all of these old English double guns have 2½-inch chambers, but again, no problem, as RST Shotshells makes many 2½-inch 12 gauge loads, even 2½-inch 20 and 28 gauge loads. Often referred to as the 12/20, these very light English doubles have 2-inch chambers, but RST makes those shells as well.

You can determine the approximate date of an old English gun by looking at the gun’s proof marks on the water table and comparing those marks with an available table those shows what years those proof marks were used. If you need information on that for a gun you’re contemplating email me, and I’ll tell you about a book that has that info. Proof is very important. As a part of proofing, the new gun is marked with the barrel inner diameter, commonly .729 in 12 gauge. If the barrel inner diameter goes beyond .010 (example .739) that’s one reason why the gun has gone out of proof. Such a gun needs re-proofed. Most proof marks also tell you the max load, i.e. 1⅛ or whatever.

Obviously, I haven’t covered everything to look for – to avoid the possible pitfalls in buying an old English side by side – as entire books have tried to cover that subject. So just be a little careful – but proceed. The enjoyment you are going to encounter in owning, holding and shooting one of these 100 year old treasures is going to be more than you can right now imagine.