She pointed to a bill introduced by Scalise to relax restrictions on interstate firearm sales.

Her timing and compassion are impeccable.

Scalise is at the hospital being treated for a gunshot wound to the hip at the writing of this piece.

He is reportedly in stable condition.

The same of which cannot be said for de la Cretaz, who linked to this 2015  report. She self-describes as a “social worker” and a “feminist.”

The report from NRA’s Institute for Legislative Action states: “Rep. Steve Scalise (R-La.) has introduced a bill to modernize certain aspects of interstate firearms commerce. The Firearms Interstate Commerce Reform Act, H.R. 2246, would yield increased convenience and choice for consumers, while continuing to allow states to set their own policy regarding transfer and possession of firearms within their borders.”

According to a bio on her personal website de la Cretaz writes for a number of news outlets: “I’m currently a news writer for The Fix and Refinery29, and my work has been featured on The Washington Post, Teen Vogue, The Guardian, The Atlantic, Rolling Stone, VICE Sports, espnW, Marie Claire, Buzzfeed, NYLON, and many others.”

Some of the stories she has written include “What To Expect When You’re Expecting — With Herpes” for Marie Claire and the many “obstacles” trans men face when breastfeeding infants for The Atlantic.  In her story on trans men who breastfeed their infants, she describes the men as being “assigned female” at birth, which is why they can still produce milk. 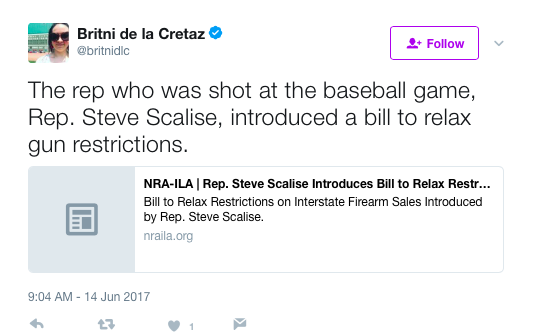 She describes herself as a writer for the following publications: 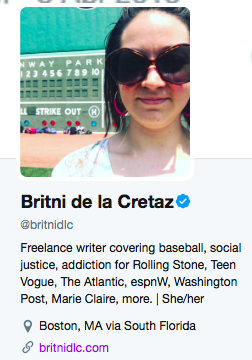