UPDATE (4:35 pm, EDT): The MaddowBlog Twitter account tweeted at 12:36 AM EDT, approximately ten minutes after the show returned to its normal programming, that they aired the wrong A block due to a “technical error.”

A technical error put an old A-block at the top of tonight’s re-air. This is tonight’s actual A block: Part 1 https://t.co/uQ3uSmuli5

And this is part 2 of tonight’s actual #Maddow A-block: https://t.co/SgU4EhiIlr

An MSNBC spokesperson could not immediately tell The Daily Caller when the network first noticed the error.

On a midnight re-airing of The Rachel Maddow Show, MSNBC mysteriously edited out a segment about the GOP shooter that was aired earlier in the night.

After James Hodgkinson shot Rep. Steve Scalise (R-LA) and four others at a GOP congressional baseball team practice, it was revealed he had volunteered for Bernie Sanders’ presidential campaign and was a huge fan of Rachel Maddow.

Maddow addressed the shooter being a fan of the show around 9:07 pm EDT, assuring viewers that Hodgkinson never contacted her nor her staff

“…[Hodgkinson] once submitted a letter to the editor that cited statistics about political donations that he says he heard on this TV show because he said he watched this TV show,” Maddow explained. “I should tell you that we went through our correspondence today…we didn’t find any evidence that he ever sent anything to this show or tried to contact us at all.”

However, the segment was mysteriously removed when the show re-aired at midnight. Instead, the first 20 minutes of the show centered on an old Washington Post report alleging that the Trump team tried to establish a back channel communications line with Russia.

Maddow didn’t get back to the GOP shooting until nearly 24 minutes into the show’s rerun, skipping completely over the segment about the shooter that originally aired in the 9 PM slot.

As it turns out, the Russia segment that MSNBC chopped into the rerun first aired on May 15, an entire month ago. Here is the original airing:

Perhaps most concerning, MSNBC appears to have purposefully chosen an old show clip where Maddow is wearing the same outfit, presumably to hide the fact that the show was edited.

Here are the two shows side-by-side. The May 15 show is on the left while the June 14 show is on the right. Maddow appears to be wearing the same black blazer in both. 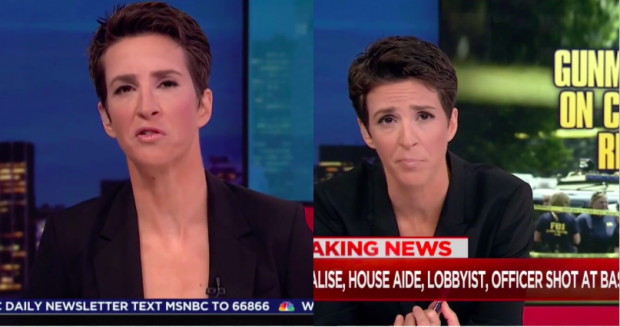 There was no indication that the rerun was edited, so viewers who only catch the show at midnight wouldn’t have any idea that they missed Maddow addressing the GOP shooter being a fan of the show.