The wind power industry lobby requested the world’s biggest open publishing website take down a leaked memo detailing its campaign to push back against a Trump administration energy study that hasn’t been released.

The Daily Caller News Foundation used the website Scribd to publish a leaked memo from the American Wind Energy Association (AWEA). The memo detailed AWEA’s media and lobbying blitz against an Energy Department study they believed would cast wind power in a bad light.

AWEA called the leaked memo “old news,” but still decided to request Scribd take down the memo. Scribd obliged, leaving a note: “This content was removed at the request of American Wind Energy Association.” 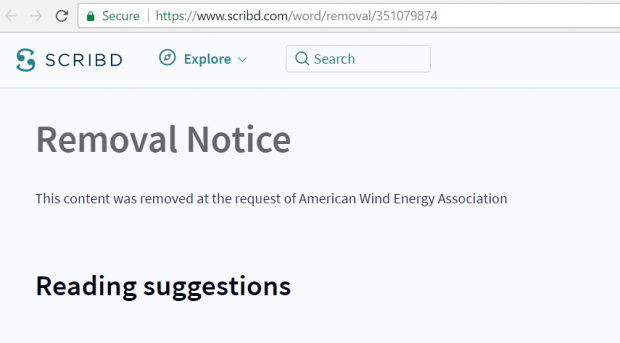 TheDCNF published its story on the leaked memo Monday, and Scribd removed it sometime in the last few days. TheDCNF was notified Thursday the document was removed.

The memo laid out AWEA’s plan to engage with federal lawmakers, regulators and the media to push back against a study they saw as “supporting baseload sources such as coal and nuclear.” The group worked with other green energy advocates, politicians and reporters to push the narrative the DOE’s study — which hasn’t been published yet — is tainted by anti-wind ideology.

Perry’s April 15 order to Energy Department officials asked them to see if regulations, mandates, and tax subsidies “are responsible for forcing the premature retirement of baseload power plants.”

DOE’s study should be released in the coming weeks, but AWEA took action before the agency released its findings — largely on the assumption it would be biased against wind turbines.

AWEA planned to have personnel discuss the study with “contacts” at the Energy Department and present their own research to the Federal Energy Regulatory Commission, which regulates the electric grid. AWEA also wanted to “pursue late April meeting with Secretary Perry and wind CEOs” and to lock down a meeting with Perry in Dallas, Texas, according to the memo.

“Ask Governors Wind and Solar Energy Coalition to integrate related language to their pending Washington Times op-ed submission this week,” reads AWEA’s memo, which also asks staff to “check with Diane Cardwell of NYT on the status of her ‘wind is the new baseload’ story.”

AWEA’s overall message: “Wind energy is helping diversify our energy mix and makes the power grid more reliable and secure, as well as bringing good jobs and billions of dollars of investments to rural and Rust Belt America.”

AWEA plans to release its own report next week, highlighting how wind turbines have helped make the grid more secure and benefited the economy. Though, AWEA’s memo also mentions hiring a third party to issue a report on the benefits of wind energy to “debunk” reports by conservative groups, like the Institute for Energy Research.

Former IER economist Travis Fisher is one of the DOE officials working on the study, according to news reports. Travis has been critical of wind energy subsidies and mandates in the past, and it’s likely AWEA saw his role in the report as detrimental to their lobbying efforts.

“Since then we’ve had some good meetings with the Department of Energy team working on the study, and we’re making sure they have all the facts about how cost-effective and reliable wind has become,” Vaughan said.

“That has been confirmed by our own research and by experts who run the grid every day, such as the Southwest Power Pool and Xcel Energy,” he said.

Apparently, the “old news” was still relevant enough for them to request Scribd take the document offline.

AWEA did not respond to TheDCNF’s request for comment.

Update: “If AWEA intellectual property is published without our permission we ask that it be removed, which is standard practice for copyright and trademark protection,” AWEA spokesman Peter Kelley told theDCNF after publication.

“As Evan said, it’s old news at this point because since that memo was written, we’ve had some good meetings with the Department of Energy team working on the study, and have been able to share with them research by the industry and others,” Kelley said.