“Father of the Year” may not be in the cards for washed up daytime talk show host Montel Williams.

Especially since he spent this Father’s Day blasting President Trump and bickering with random followers. And no, I was not among them. But I did task George Congdon, a junior at Emory studying political science and one of The Daily Caller‘s summer interns, with rounding up the nasty tweets Montel published over the weekend.

Before the payday loan pusher’s “political director” Jonathan Franks can call me a “whore,” let me tell you what Montel — who has four children — was so irate about on Sunday.

In the morning, he went on a 10-tweet tirade about NBC’s Megyn Kelly interview with InfoWars host Alex Jones that aired Sunday night.

He’s sort of pro-Kelly and anti-Jones. He believes she shouldn’t have done the interview in the first place.

Memo to Montel: Kelly is a WOMAN.

By early afternoon, he was bashing President Trump. 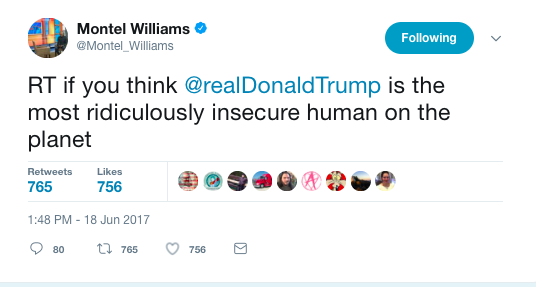 Naturally Montel then retweeted himself. Including his own, he got 767 retweets. What more could anyone want in a day’s work?

He also found time to make fun of Milwaukee Sheriff David Clarke, who turned down a Homeland Security post in Trump’s administration.

“David ‘I wear lots of medals I didn’t earn’ Clarke is, thank God, too batshit crazy even for @realDonaldTrump,” he quipped.

But…he grew snippy when a follower — Roberta Horgen — tried to downplay his service to the country.

“Have YOU earned ANY medals @Montel_Williams?” she asked.

Like an angry bull, he charged back at her, saying, “22 years in the military… So yes, if you had googled before you tried to act smart on here you wouldn’t have sent a stupid tweet like this.”

By evening, he was still badmouthing Trump.

On a positive note, at least this time Montel didn’t retweet himself.