Through its many incarnations the Weatherby over and under has continued to stand for a quality gun at a reasonable price.

Mention Weatherby, and most people associate the company with its line of magnum rifle cartridges and the associated rifles. The Weatherby name also stands for quality and that carries through to the company’s shotgun line as well.

The latest version of the Orion, Weatherby’s over and under launched in 2014, is no exception to the quality mantra the company maintains. This is the latest of several different incarnations of the Orion, giving a good compromise for affordability and quality. 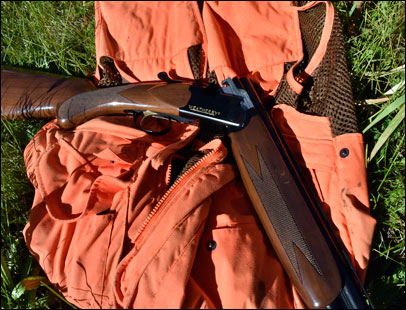 Although the newest Weatherby Orion is at home in the field, its good balance makes the shotgun a natural for wingshooting.

To step back in time, Weatherby got its start when Roy Weatherby launched the Weatherby magnum calibers in the 1940s. Gun manufacturing started with the Mark V rifle in 1957, The Mark V was known as a premium rifle to shoot Weatherby’s line of magnum cartridges.

The latest version of the Orion came after a hiatus when the gun wasn’t built. It is now manufactured by ATA in Turkey, which is a different company than is presently manufacturing Weatherby pumps and semi-automatics in Turkey. 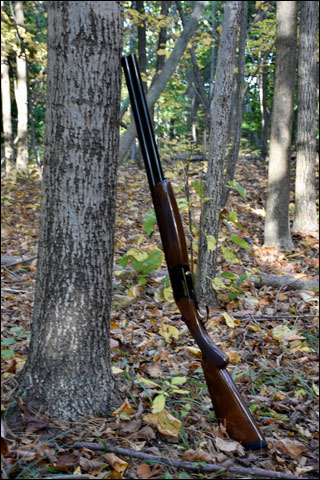 The latest version of the Orion continues a long line of quality over and unders from Weatherby.

“Turkey now reminds me of what Italy was in the early years with a lot of manufacturers,” said Dean Rumbaugh, Weatherby’s historian.

Although some might have concerns about Turkish guns, Rumbaugh assures the Orion still has to meet Weatherby standards and the company designed the gun. “If Weatherby’s name is on it, it will be a quality product.”

Out of the Box

Taking the Orion out of the box, the first standout is the Weatherby name etched in gold lettering on the receiver. Done with a modern font, this adds character to the gun, giving a modern flare to a classically styled firearm. 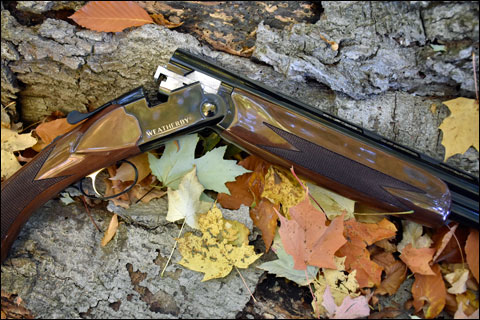 The Weatherby name etched in gold on the Orion receiver compliments the gold trigger.

Available with 26 and 28-inch barrels, the model I have has the shorter barrel. Barrels are chrome lined, with a vented matte rib to cut down on glare on top. Both models have three-inch chambers for hunting. The only option for beads is a single brass bead at the front of the rib.

The company is calling the grip a Prince of Wales with its relaxed curve and rounded knob. Although every manufacturer varies the stock dimensions to a certain degree, the Prince of Wales is more than just a rounded grip cap. As a generality, the circumference of the grip is not as tight as with a standard pistol grip. It is sometimes considered a compromise between a pistol grip and a straight grip.

The Prince of Wales grip is shown in this profile photo of the Weatherby Orion.

Examining the technical stuff, the Orion has a length of pull of 14-5/8 inches, drop at heel of 2-3/8 inches and the drop at the comb is 1-5/8 inches. The weight of both versions is 7 pounds.

At present, the gun is only available in 12 gauge. My comparison for the new model is my 20-gauge Orion, built in the SKB era. It was my first over and under and a pleasure to shoot.

Besides guns produced with its own name, SKB was known for building over-and-unders and side-by-sides for Ithaca. 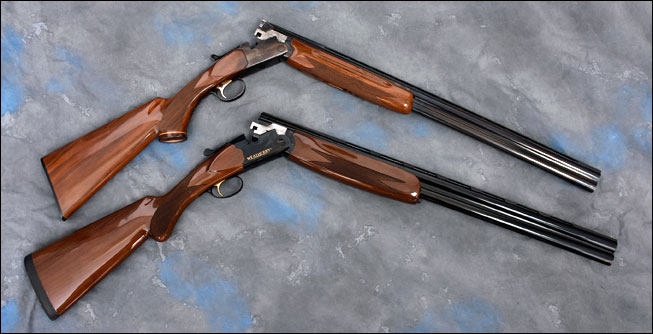 The Orion SKB-era, above, and the newest version of the Orion. Big changes between the two are the location of the barrel selector and the Prince of Wales grip on the new version.

The original Weatherby over-and-under was the Regency line from 1967-1982, built by Angelo Zoli. Nikko, the company that built Winchester’s Model 101s at the time, produced the Weatherby Olympian from 1977 to 1981.

Getting back to the newest model, throwing the gun up to my shoulder, it has nice balance and pointability – something that impressed me with my SKB Orion.

I decided to do a side-by-side test with my Orion and the newest one. There were many similarities between the two. Both have a boxlock action and ejectors. The receiver of the new Orion is trimmer though, something that contributes to faster handling. Both have Grade A walnut with high-gloss finish. 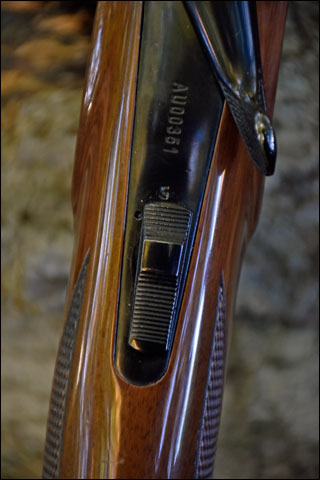 The tang safety also doubles as a barrel selector on the new Orion.

One change was the barrel selection system. With the SKB, barrel changes were done with a push button on the trigger. Although I don’t hunt with a pointing dog and have a little less time cushion, I often thought it impractical to slide a switch to the side on the safety and get the gun up in less than a second – especially with gloves on. Yet, this is the design most doubles go with. It’s also the system on the new Weatherby.

Which barrel was firing was indicated by a graphic showing one dot or two over one another. This system is fine once you get onto it, but it had a small learning curve. Having the letters O and U would make it more apparent. 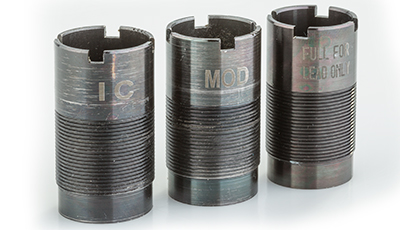 The Winchoke system is used for the latest Weatherby Orion.

The forend is completely different with the new Orion. Removal is now with an easy-to-operate pin system and the forend isn’t as trim as it was with the SKB. The last observation might be the difference between 12 and 20 models though.

The recoil pad is of the modern-looking with rounded edges. A Weatherby “W” embossed in the middle is another touch of class.

Taking the gun to the range

I always thought if I was to buy a 12 gauge over and under it would be a Weatherby to match my 20. That’s why I looked forward to testing the new Orion with extra anticipation.

Coincidentally, when I first try the gun at the trap range another shooter who had a new Orion told me it shot flat. Although I took his advice, it took until the second target before I caught on.

Although the gun was new and the action stiff, it’s not overly tight and did loosen up with the little I shot it while testing it.

My plan was to shoot two different boxes of target loads to test the difference in recoil. I started with 1-1/8-ounce loads and then tried lighter one-ounce shells.

I have two boxes of target loads with me – one each in ounce and ounce-and-an-eighth. I took the different loads to see how this gun handles the recoil.

After the first box, I could tell I had been through a whole box by the way my shoulder felt. It should be noted, though, that when I was a regular trap shooter, one-ounce loads were my preference.

With one box down, a little more comfort with the gun and less recoil, my score improved slightly on the second round with one-ounce loads. Although it’s hard to judge recoil unless shooting guns immediately after each other, I felt the Orion tamed the recoil as well as some trap guns I have shot.

My experimentation at the trap range included shooting out of both modified and full chokes to compare how they broke birds. Both broke targets quite well and I didn’t see any pattern inadequacies responsible for a missed bird.

The next test was at the skeet range. While I wished for a longer barrel at the trap range, the Orion with 26-inch barrels was perfect for skeet. Even though it was only the third box of shells I shot through the gun, it fit so well it had a familiarity to it.

My only hunting test with the gun was limited to a quick pheasant hunt that was unproductive, but I note the Orion was a pleasure to carry.

The next experiment was patterning the gun on a patterning board to test the choke spread and coverage. With #8 pellet, one-ounce target loads fired through a full choke at a 30-inch circle at 40 yards, the pellet count was 268. With #4 Winchester 1-1/4-ounce pheasant loads, there were 122 in a 30-inch circle at 40 yards. Both of these loads are within the normal 65 to 75 per cent expectations for full choke.

Examining the pattern on a practical basis, I would say it would take a lucky pheasant to squeeze through any of the small holes in the #4 pattern. There were a few holes in the target load pattern a clay bird would fit through, but all were tiny enough that with the speed of the target, there is little doubt they would be crushed.

Through the three boxes of shells, the gun operated flawlessly. The ejectors worked well, throwing the shells clear if I opened the gun with that intention in mind, or enabling easy removal if at a range.

With many options out there for Turkish-made double barrels, there is no doubt you could spend less money than the Orion’s $1,100 MSRP. But, you won’t find one that gives as much value. This gun would be high in my rankings when looking for a 12 gauge double barrel.

No matter what the reason, modern shooters are left with another option when choosing a shotgun.