Warmbier was detained in North Korea after he was accused of stealing one of the country’s propaganda posters. He was finally returned to the U.S. after 17 months but was in a coma due to severe brain damage and died shortly thereafter.

Apparently devoid of any sympathy, Affinity Magazine is blaming the U.S. teen for his own death on Twitter.

“If you decide to go to North Korea then you have to respect their laws,” the magazine wrote on Monday. “Otherwise you better stay home.”

If you decide to go to North Korea then you have to respect their laws. Otherwise you better stay home. https://t.co/HkGCh1P0Id

In a now deleted tweet, Affinity said Warmbier’s behavior was due to white privilege, and again said, “respect their laws.” 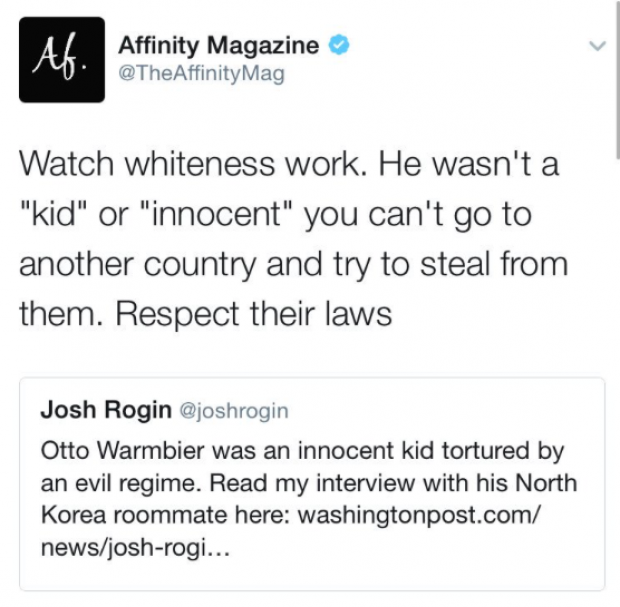 Hmm.. Wait until you find out what American police kill people for https://t.co/yKdNmxWgNy

The tragic irony in Affinity’s victim-blaming is that it often encourages illegal immigrants not to follow U.S. laws.

Undocumented Immigrants: Why They Can’t Just “Get in Line” https://t.co/aDTrWIpbKx pic.twitter.com/xCzRD3nziB

If you’re undocumented, not an American citizen or simple can’t vote, you can vote right here with us!

Now, I want to know how Obama will make college affordable for undocumented students. #SOTU

“My parents are still undocumented immigrants living in New Jersey. Why? Because of the corruption in the United States government”