Liberals on Twitter are blaming white supremacy and Donald Trump for the murder of a Muslim teen, despite the fact that the suspected murderer is an illegal immigrant from El Salvador.

a 17 y/o Muslim girl was murdered yesterday in Virginia & today in London, a terrorist drove a van into a crowd of muslims leaving prayer.

Darwin A. Martinez Torres was arrested Sunday as a suspect in the death of Nabra Hassanen, a 17-year-old Muslim high school student from Virginia.

Immigration and Customs Enforcement confirmed with The Daily Caller that Torres is an illegal immigrant from El Salvador. Investigators believe the attack was the result of road rage and is not being investigated as an anti-Muslim hate crime. (RELATED: ICE Places Detainer On Salvadoran Immigrant Suspected Of Murdering Muslim Teen)

Despite the facts of the case, Twitter liberals are blaming everything from white supremacy to Islamophobia for the death of Hassanen.

islamophobia is global. it’s disgusting & innocent ppl are being murdered because of it. I’m sad all of this is happening during Ramadan.

Brittany Packnett, a verified “educator” and “activist” implied that “people of color are being terrorized” at the hands of white people, despite the suspected killer being a person of color himself.

#Nabra should be alive today.

People of color are being terrorized, over and over again.

Silence is a sin.

Some, including CNN opinion writer Jeff Yang, incorrectly stated that Hassanen was killed by white men.

Just because she’s s Muslim some white dude beats her to dead. Now you see who’s the real Terrorist…

Two white men beat Nabra to death w/bats out of hate/fear of people who look like her. We saw something similar 36 yrs ago #UniteAgainstHate pic.twitter.com/SfsMkWBt09

Road rage? The guy came at a group of teenage girls with a fucking bat, then kidnapped and murdered #Nabra.

Have you noticed how “law enforcement” go out of their way to deny the racial motives for these white supremacist terrorist attacks? pic.twitter.com/lxkb3SdOhJ

Others, including a self-described “journalist,” called the murder an instance of “Islamophobia” despite investigators reaching the conclusion that road rage, rather than anti-Muslim bias, motivated the attack.

Anti-Muslim terror: same day a genocidal Islamophobe ran over worshippers at a London mosque, a teen Muslim was beaten to death in Virginia

Trump is the spokesman for the Anti Muslim rhetoric that inspires terrorist to murder Muslim Teens.#JusticeForNabrahttps://t.co/o1zTmaleWj

In a now deleted tweet, Amy Siskind, the founder of “The New Agenda,” also incorrectly claimed Hassanen’s murderer was a white man. 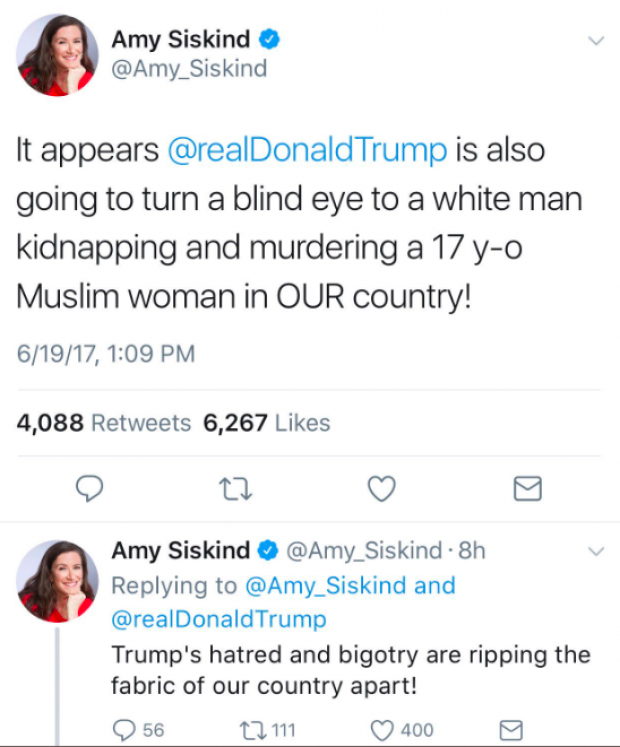 Don’t let those pesky facts get in the way of your narrative!