Freedom of speech is great and all. But Scott Baio‘s wife needs to zip it.

It’s not polite to insinuate that Rachel Maddow, an openly gay female MSNBC host, has male facial hair just because you disagree with her politics.

Tuned in to see a Rachel Maddow meltdown. She’s already back on the Russia nothing burger. How bout waxing that upper lip 5 O’clock shadow?

Just after midnight Wednesday, Renée Baio, whose Twitter feed isn’t for delicate flowers, went there. Which is to say she wrote something that made even many her own President Trump-supporting followers collectively gasp.

There was even a GIF of Will Smith from “The Fresh Prince of Bel-Air” pulling in a breath of full-on shock. 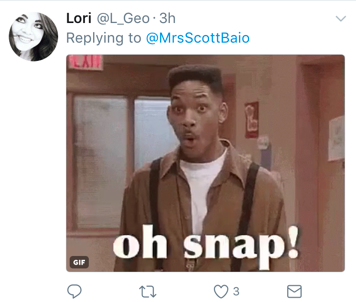 While Rachel Maddow dude jokes are a dime a dozen, she isn’t too hung up about her looks. During a recent appearance on “The Howard Stern Show,” the lefty MSNBC host told Howard that she took to the streets in one of her first jobs to ask strangers if they thought she was a girl or a boy.

“Renee… you are getting too savage for your own good,” a follower remarked to Baio’s wife. “Keep it up, I like that shit.”

But not everyone was cheering her on.

“Krissy” remarked, “Renee now be nice! We can’t bring ourselves down to their level.”

And “Lori Boudreaux” was also not a fan of bashing Maddow’s looks.

“I don’t like RM,” she wrote. “I don’t agree with any of her opinions political or otherwise. I don’t think it necessary to attack her appearance. It’s petty.”

“VettingTheLeft” displayed a sense of irony, writing, “Rachel is still the man with many on the left.”

The Baios surfaced during the 2016 presidential election when Scott Baio name reentered the Zeitgeist as one of Trump’s few famous surrogates. He gave a speech on the first night of the Republican National Convention in Cleveland. Scott Baio first became famous on the 70s hit show “Happy Days” in which he played Chachi Arcola followed by the spinoff “Joanie Loves Chachi” and later “Charles in Charge.”

In a 2016 interview with Fox News, Scott Baio said then-President Obama was “a Muslim” or “a Muslim sympathizer.”

While Renée seems to think everyone wants her husband, I want to disavow her of that notion.

While it’s true that “Joani Loves Chachi,” not every female on the planet is mesmerized by him.