“You know what everyone needs to do right now is shut the fuck up.”

Washington journo gets unexpected therapy from a homeless man

“A homeless man just screamed at me ‘SHE’S MASOCHISTIC SHE LIKES INFLICTING PAIN ON HERSELF!’ which is the most accurate catcall of all time. I don’t need to go to therapy now.” — New York Mag’s Olivia Nuzzi.

“Expect more rallies like this one. President Trump appears to be enjoying himself.” — Trey Yingst, White House reporter, One American News Network.

Apparently Renée Baio, wife of Trump supporter Scott Baio (a.k.a. “Chachi Arcola”) is a force to contend with on Twitter. She’s got a venomous following that will come down on you with the wrath of God if you dare to suggest that something she says is less than Christian. On Wednesday I published a piece telling her to “zip it” because she accused MSNBC host Rachel Maddow of having a 5 o’clock shadow. You’d have thought I told her to go to hell. She accused me of being a –gasp!– liberal and had some choice things to say about me and my piece.

She snapped back at me with this: “I never said Rachael was a man. Your assumption is your problem. Most women wax.” Seriously. That’s her excuse is for saying Maddow has a 5 o’clock shadow?

Tuned in to see a Rachel Maddow meltdown. She’s already back on the Russia nothing burger. How bout waxing that upper lip 5 O’clock shadow?

Here’s a snippet of the convo between us: 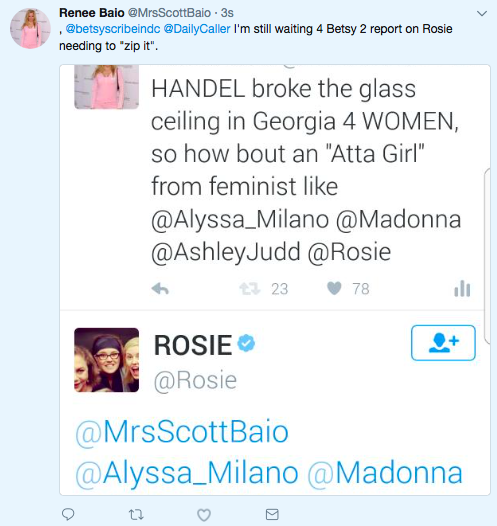 ME: We can chat tomorrow. But I’ve read your remarks and will give them some thought.

BAIO: I’m an independent. I believe in living ur life ur way, but let me live mine w/out shoving ur beliefs on me.

BAIO:  While you’re at it, plz give this some thought before our chat! (With that, she posted a picture of some friend of hers who went on my Facebook to tell me I was too harsh about her. I told him considering what she said about Maddow, I wasn’t harsh enough.)

ME: If you’re willing, follow me and we can chat privately tomorrow.

BAIO:  Why? I’ve got nothing to hide, nor do I want you 2 edit my words. Seems like u play both sides.

ME: I’ve got nothing to hide either. Your choice. But I’m not getting into a big thing with you on here. Would rather have a civilized convo.

ME: My story actually wasn’t too harsh towards you to be honest. But it is what it is. Your reaction is whatever that is.

BAIO: My reaction is, you should have done a better job. Clearly, you’re a liberal working 4 Tucker. …Tucker is a friend of ours. We respect him & like his show. Shame you’re not like him.

ME: Clearly you don’t know anything about my politics. And I don’t really care if you liked the piece of not. And Tucker works for FNC. …haha…you’re hilarious. Tucker is a friend of mine too. But he is one of a kind and you are not like him either.

BAIO: Why are you getting so angry or testy? No need since we are having a great convo.

ME: I’m not getting angry. Tone is hard to read on Twitter. But I’m not sure I’d call this a “great convo.” [laughter] …Again, up to you. I can’t make you. But I’m also not going to let this get blown up into something it is not.

BAIO: Perhaps you should have read over my timeline b4 you bashed me, & @ScottBaio.

ME: Please. I barely bashed you.

BAIO:  A bit of hypocrisy reporting about me bashing a woman, yet u admit u bashed me in the report.

BAIO: But, you did bash us.Why? Isn’t the Daily Caller a conservative/libertarian site?

ME:  I didn’t “bash” you. I disagree with that assessment. I wrote that you insinuating @Maddow has a mustache is not ok. I stand by that 100%.

ME: I honestly don’t know what you’re even talking about at this point. But I’m done with this conversation for tonight.

Note to Renée Baio: Hi there. How do you know Rachel Maddow doesn’t wax? To respond to your comment, I’ve written about Rosie plenty — to the point where she has blocked me on Twitter. But funny you should say this because we have a Rosie-Trump piece in the works. So stay tuned!

Mother Jones editor weighs in on journalists and violence

So here’s how this whole thing went down: I wrote a story mocking Guardian’s Ben Jacobs for insisting he’s so uncomfortable with the attention of getting body slammed and being the story. He’s so uncomfortable that he keeps releasing formal statements filled with his thoughts about Rep. Greg Gianforte (R-Montana), the rage filled candidate who laid him out at a campaign event. I’ve never met CNN’s Jason Morrell, a producer for the network’s Kate Bolduan, who can’t be blamed for her producer’s idiocy. Though we’ve never met and I never heard of him before Wednesday, somehow he went apoplectic after he read my story and deemed himself qualified to psychoanalyze me on Twitter.

Morrell: So your rationale: Reporter should be body slammed again b/c he encourages man who attacked him to give him the interview he promised. Wow.

Me: Nah. Was really tongue in cheek. But I get how you wouldn’t have a sense of humor about a guy who says he doesn’t want to be story…but who keeps making himself the story. Keep up the great sense of humor Jason!

Me: Sure thing. Love you too, Morrell.

Me: You have zero comprehension of my piece. I can’t believe you work as a producer at CNN. Honestly. Good luck.

Morrell: And I totally CAN believe you work at the Daily Caller.

Morrell: Thanks, I thought so too! much funnier than your piece.

Me: I don’t find you funny at all actually.

Morrell: And I don’t find you intelligent.. But look, imma let you finish cuz I know you like to have the last word. I get it. It makes u feel better.

Me: Zzzzzz… (Thought bubble. Not an actual reply.)

“k ok this… omg @IvankaTrump you have sex with this guy??? I can’t aahhhhhaaaa.” — Ellen Pompeo, actress, Grey’s Anatomy.

Hard to work towards Unity when you back up an early Bernie supporter who’s being falsely attacked and then started getting attacked too.

Then a soon to be candidate liked those tweets and responded he doesn’t personally attack. Shouldn’t have embraced and should have denounced. I backed up an early Bernie supporting running for office against baseless personal attacks. I got attacked.

Do we need to stop reliving the 2016 primary? Yes. But God for bid you’re a Hillary supporter who picks between 1 of 2 early Bernie backers News flash: this will probably be one of the best investments ever made in Paul Ryan’s district by Democrats in advance of the general.

Since when were early Bernie Sanders supporters against a primary? I thought primaries were good. Yes, I’m with the guy who moved his life and took the fight right to Paul Ryan. A first time candidate inspired to run. A fighter.

It’s almost comical arguments being made… Well… You aren’t supporting the right one of the two early Bernie supporters. The only two Democrats running in Paul Ryan’s district were both with Bernie Sanders in 2016 primary. Stop invoking Hillary Clinton.

I’m supporting @DavidYankovich who sat by his mother in the ICU while watching Ryan try to tear apart ACA & fearlessly stepped up to run. 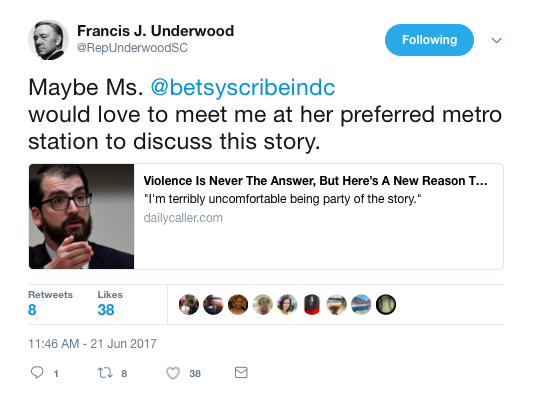