WASHINGTON — New York Republican Rep. Claudia Tenney served up popcorn to hungry workers in downtown Washington, D.C. as she highlighted an Obama-era ruling that raised concerns for small businesses and entrepreneurs across the country.

Tenney visited Kristie Arslan’s Popped! Republic food truck, where she discussed how an Obama-era labor ruling has hindered Arslan and other small business owners looking to expand through the franchise route. Tenney served up Arslan’s fresh gourmet popcorn while explaining how a 2015 National Labor Relations Board (NLRB) ruling threatens the growth potential of small businesses like Popped! Republic. 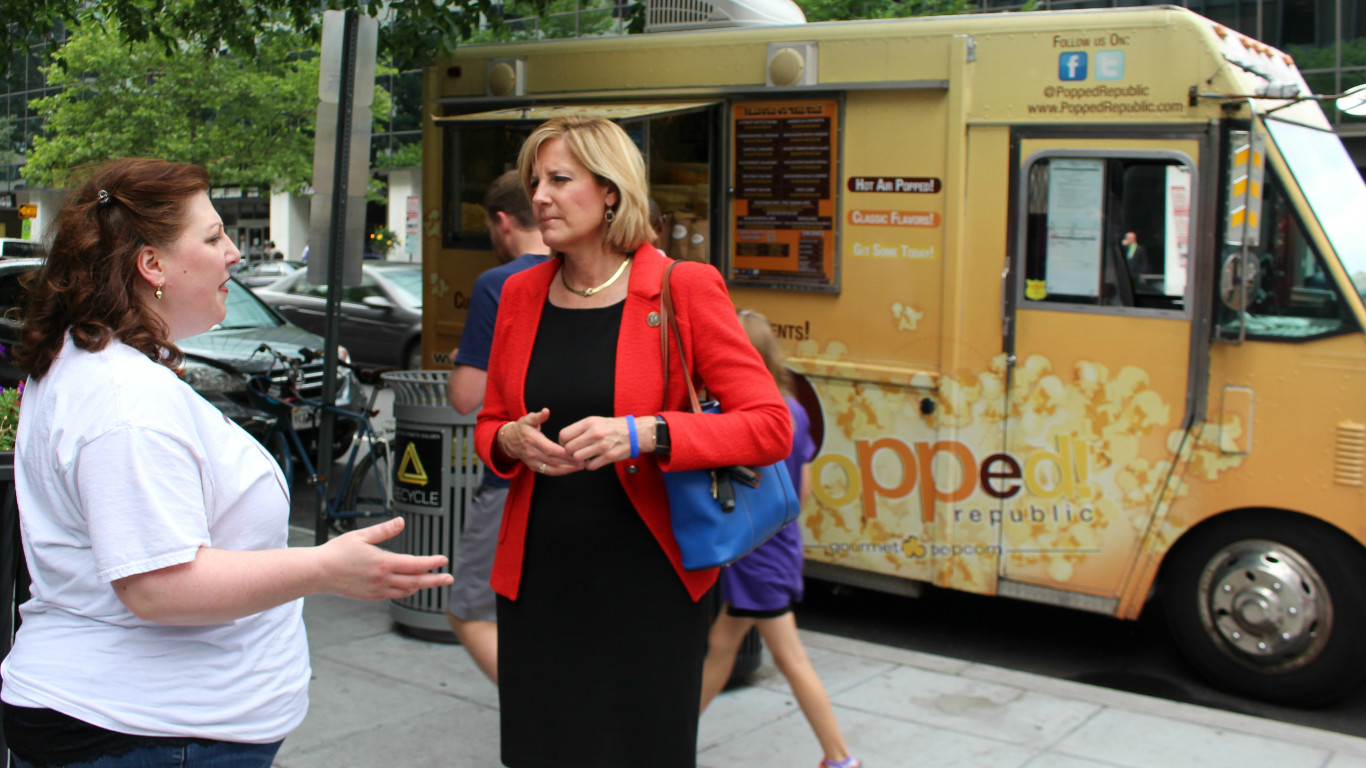 The NLRB replaced its “direct and immediate” control standard for a broader standard based on “indirect” control in its 2015 Browning-Ferris decision. Up until Browning-Ferris, The NLRB used a “direct and immediate” control standard for determining joint employer status. If two separate businesses had actual authority over terms and conditions of employment and day-to-day supervision, they would be classified as a joint employer. The shift was the first time in decades that the NLRB considered indirect control as the main factor in determining whether a joint employment relationship exists.

Former President Barack Obama’s Department of Labor also issued administrative guidance that outlined its interpretation of joint employment under the Fair Labor Standards Act. A joint employer is a scenario where two separate businesses share legal responsibilities over the same employee. The guidance offered a new analytical framework for evaluating joint employment that many in the business community said would increase litigation against employers. President Donald Trump’s Secretary of Labor Alex Acosta has since rescinded the informal guidance.

“The joint-employer ruling has jeopardized opportunities for small businesses looking to franchise across the country. The standard overturned thirty years of bipartisan precedent, increasing compliance and legal costs, meanwhile leaving franchisees with less access to assistance and guidance from franchisors,” Tenney told The Daily Caller News Foundation. “In April, I joined nearly 60 colleagues in calling for language that would protect small businesses from the joint employer standard. Since its inception, the joint employer ruling has been confusing and burdensome for businesses looking to grow and expand.

Launched in May 2012, Popcorn! Republic is now growing. Arslan, who was an association executive, started the popcorn business with her husband, who was in the pharmaceutical industry. In addition to the truck, the couple have a factory store in Alexandria, Va. All 20 flavors are homemade and DC themed, like the popular “K Street Kettle Corn.”

“We looked into this rule and learned how it would transfer a lot of liability on the brand owner for those that are franchising,” Arslan said. “Obviously a small business, liability is a concern. We want to grow, but we certainly don’t want to take on more substantial liability.”

Kristie’s Popped! Republic is a prime example of a way this standard has negatively impacted small businesses and prohibited real growth and job creation,” Tenney said.

Traditionally, businesses have been able to grow at a much faster pace through the franchise model.

“If we did franchising, we could probably open, at minimum, five locations in a year versus one location in a year,” Arslan explained. “We would seek franchise owners who would invest in the brand to open their locations. We’d help them get launched and then they run their business.”

Arslan said that the Obama-era ruling has affected their business decisions.

“It’s the uncertainty. It’s too great,” Arslan said of the concerns faced by small businesses looking to expand through the franchise route. “One lawsuit can bankrupt your business.”

Arslan seems hopeful that under the Trump administration, the standard will be rolled back to its traditional interpretation, but she also called for a legislative fix.

“There’s already been a big push to reduce the regulatory burden on small business, and so we’re hoping this gets addressed,” she said. “I think the only way to resolve the issue is legislative action.”

Tenney discussed policy and served up hungry lunch goers just blocks from the White House. The truck’s flavors and mixes include an Obama mix which is caramel and cheddar, a famous Chicago combination. The truck’s Trump mix is orange cheddar with blazing buffalo.

When asked what a Tenney Popcorn mix would look like, she said Caramel, Cheddar and Maple (made with maple syrup from Central New York maple trees, of course). Matt Haller, International Franchise Association’s senior vice president of government relations and public affairs offered up a suggestion of what a franchising association mix would look like.