“I want to scream at the TOP OF MY LUNGS.”

Opinion: White House briefings should be off camera

“White House press briefings should be held off-camera more often. Cuts down on the theatrics on both sides and gets more to actual substance.” — The Hill‘s media writer Joe Concha.

(This comes after months of the MSNBC TV couple Joe Scarborough and Mika Brzezinski wondering aloud about President Trump losing his marbles. Hannity and Scarborough have gone at it on Twitter. So far, JIKA has not responded to this. Hannity wrote this at 10:58 p.m. Thursday night.)

“Question of the Day: Do you think Joe Scarborough and Mika Brzezinski are becoming emotionally unhinged? #Hannity” 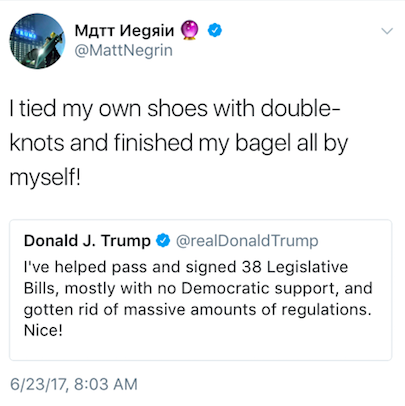 Daily Mail Online: “Cycle to work: those who commute on a bike feel less stress and are able to work better.”

Derek Hunter (Daily Caller, WAML): “They ‘feel less stress’ because they push all that stress on everyone else with the traffic caused by bike lanes and their smell.”

Do reporters have lives?

‘”Reporters’ do not have lives. Some journalists do, like glossy magazine editors. But reporters obviously don’t.” — Ben Dreyfuss, senior editor, Mother Jones. He was responding to Billy Penn, who wrote, “Chris Christie says reporters “are people who have no life,” which we at PolitiFact PA would probably rate Half True.”

Overheard: Oversharing in an Uber Pool

“Girl in this uber pool is currently going through all her recent dating history next to the guy she is apparently currently dating.” — Katie Watson, CBS politics writer, Daily Caller News Foundation alum.

‘@betsyscribeindc @MrsScottBaio @DailyCaller @TuckerCarlson Did you write about Kathy Griffin or others zipping it about Trump or Barron?

To answer Chachi’s question, yes, I did cover the Kathy Griffin debacle — extensively. Please enjoy the eight stories I wrote on the matter: One, two, three, four, five, six, seven and eight.

Want a refresher on my coverage of Renée Baio‘s rudeness? See here and here.