Marine Sergeant Christopher Jacobs always told his wife, Brittany, and his son, Christian, “go big or go home,” and that’s exactly what they’ve been doing since his untimely death in 2011.

On October 24, 2011, Sgt. Jacobs — then 29 years old — was killed in a training accident in Twentynine Palms, California. Christian was just eight months old at the time.

Ever since, Brittany and Christian have traveled around the country keeping Sgt. Jacobs’ memory alive.

“[Christian] has cried wanting to know why his daddy can’t come down from heaven because he needs him,” Brittany told The Daily Caller. “He talks about his dad daily. He doesn’t cry over it like he used to now. He’s doing better with that, but he asks questions about him.”

Jacobs and her son first received national attention when they visited Arlington National Cemetery on Memorial Day in 2012. Jacobs says that was the first time she had seen her late husband’s headstone.

“It hits you all over again. When I saw that it was like a smack in my face. I cried,” she said, her voice breaking. “It hurts to go back and think about it.”

Initially, Jacobs had her friend take Christian away so she could be alone at the grave for a few minutes. But when Christian saw his mother crying, he ran back to her, kissed her forehead, and gave her a big squeeze.

Photographers caught the moment on camera and the photos went viral.

“He was barely over a year old when it happened,” Jacobs recalled. “I was getting calls before I even got home from Arlington that day. And I always think, you know, it’s gotta be Chris… It’s gotta be his daddy somehow shining through.”

In 2015, CNN shared a video of Christian in the uniform “reading” a letter to his father on Memorial Day. Jacobs says Christian was too young to know how to read, so the words he spoke were made up on the spot.

This year, the Jacobs family visited Arlington for Memorial Day again and had the opportunity to meet President Donald Trump and Vice President Mike Pence.

Christian ran right up to President Trump and asked him if he wanted to meet his dad. 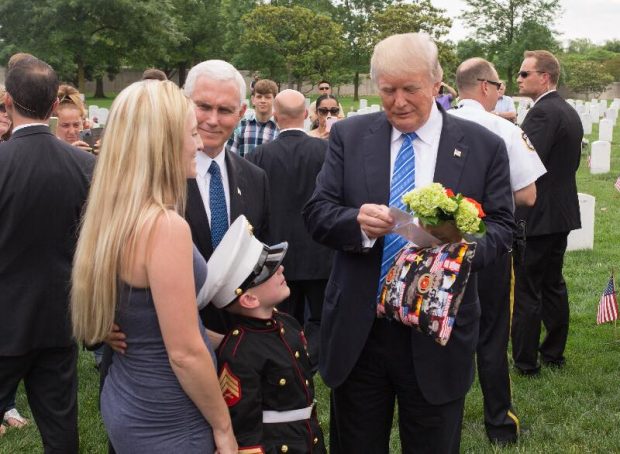 “You know, he’s little. He doesn’t understand how important of a person President Trump is,” Jacobs explained. “He just saw him as this special guy that he sees on TV. And he wanted to show him his daddy. Just the innocence of it was unbelievable.”

Trump and Pence agreed to go with Christian, now six years old, to see his father’s grave. Christian told them all about his dad and showed them family photos.

“I remember Trump goes, ‘He’s an aggressive little guy! I like that!’” Jacobs recalled.

The meeting with Trump led to an interview on Fox & Friends, and the interview led to an invitation to the Faith & Freedom Coalition’s Road to Majority conference.

“We got a call from the Faith & Freedom Coalition, the next week they were having an event in DC and they took us up there and Christian got to meet President Trump again,” Jacobs recalled.

President Trump spoke about the Jacobs family during his speech at the conference and led a standing ovation for Christian.

“I bawled. It was a special moment. My son doesn’t get it right now but soon he will,” Jacobs said.

Many people at Arlington remember Christian as the little boy who wears a mini Marine uniform so that he can look just like his dad. In fact, Christian now says he wants to be a Marine when he grows up. 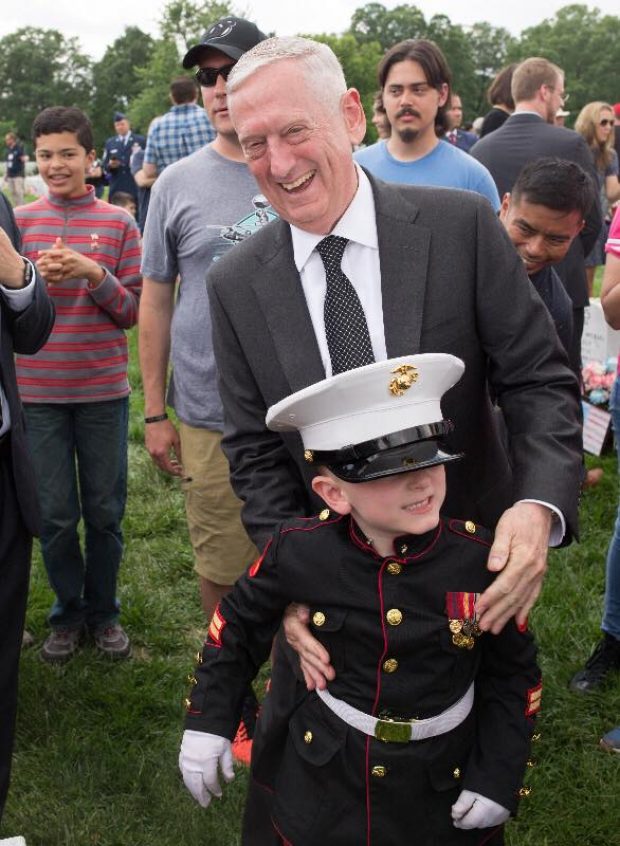 “This is very new to him,” Jacobs explained. “At one point he was saying he didn’t want to be a Marine because they get killed.”

The switch happened when Jacobs finally took Christian to Twentynine Palms to see where his father died.

Sgt. Jacobs survived combat tours in Iraq and Afghanistan but was killed while training with an amphibious assault vehicle in Twentynine Palms. Christian told the Lieutenant who showed him around the area that he wants to operate the vehicles so that he can prevent other people from dying like his dad.

“His daddy always told him ‘go big or go home,’” Jacobs said. “His daddy was a leader and Christian is a leader too.”

Jacobs said Christian has been a stabilizing force for her while dealing with her husband’s death.

“People say, ‘you do so much for your son’ but they don’t understand how much he’s done for me,” she explained. “That has been my little rock.”

You can follow updates from the Jacobs family on Sgt. Christopher Jacob’s memorial Facebook page. If you wish to contribute to Christian’s education fund, you can do so here.